Not even the coolest president ever can conjure up a national medical regime for 300 million people. 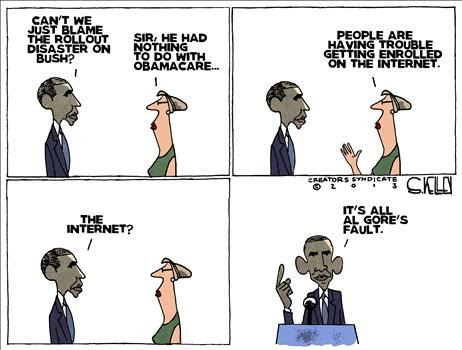 If you’re looking for an epitaph for the republic (and these days who isn’t?) try this — from August 2010 and TechCrunch’s delirious preview of Healthcare.gov:

“We were working in a very very nimble hyper-consumer-focused way,” explained Todd Park, the chief technology officer of the U.S. Department of Health and Human Services, “all fused in this kind of maelstrom of pizza, Mountain Dew, and all-nighters . . . and, you know, idealism. That kind of led to the magic that was produced.”

Wow. Think of the magic that Madison, Hamilton, and the rest of those schlubs could have produced if they’d only had pizza and Mountain Dew and been willing to pull a few all-nighters at Philadelphia in 1787. Somewhere between the idealism and the curling slice of last night’s pepperoni, Macon Phillips, the administration’s director of new media, happened to come across a tweet by Edward Mullen of Jersey City in which he twitpiced his design for what a health-insurance exchange could look like. So Phillips printed it out to show his fellow administration officials: “Look, this is the sort of creativity that is out there,” he said. “One thing led to another and he left Jersey City to come to D.C. and helped push us through an information architectural process.”

Don’t you just love it! This is way cooler than the decline and fall of the Roman Empire: The only “architectural process” they had was crumbling viaducts. I think we can all agree that Barack Obama is hipper than all other government leaders anywhere, ever, combined. Unfortunately, the dogs bark and the pizza-delivery bike moves on, and, in the cold grey morning after of the grease-stained cardboard box with the rubberized cheese stuck to it, Obamacare wound up somewhat less hipper and, in fact, not even HIPAA — the unpersuasively groovy acronym for federally mandated medical privacy in America. Appearing before Congress on Thursday, the magicians of Obamacare eventually conceded that, on their supposedly HIPAA-compliant database, deep in the “information architectural process” is a teensy-weensy little bit of “source code” that reads, “You have no reasonable expectation of privacy regarding any communication of any data transmitted or stored on this information system.”

Democrat members of the House committee professed to be bewildered at why anyone would be either surprised or upset to discover that his information can be shared with anyone in the federal government, including a corrupt and diseased IRS that uses what confidential information it can acquire to torment perceived ideological enemies. And at a certain level the more blasé of the people’s representatives such as New Jersey’s Frank Pallone have a point: If Obama thinks nothing of tapping Angela Merkel’s cell phone (as she had cause to complain to him on Wednesday, in what was said to be a “cool” conversation, and not in the hepcat sense), why would he extend any greater privacy rights to your Auntie Mabel?

Incidentally, do you think we need a congressional oversight committee to look into the effectiveness of congressional oversight committees? Every time I’m stuck at Gate 37 and glance up at the 24/7 Wolf Blitzer channel there’s somebody testifying about something: Benghazi . . . Lois Lerner . . . Obamacare . . . No one gets fired, no agency gets closed, nothing changes.

The witness who coughed up the intriguing tidbit about Obamacare’s exemption from privacy protections was one Cheryl Campbell of something called CGI. This rang a vague bell with me. CGI is not a creative free spirit from Jersey City with an impressive mastery of Twitter, but a Canadian corporate behemoth. Indeed, CGI is so Canadian their name is French: Conseillers en Gestion et Informatique. Their most famous government project was for the Canadian Firearms Registry. The registry was estimated to cost in total $119 million, which would be offset by $117 million in fees. That’s a net cost of $2 million. Instead, by 2004 the CBC (Canada’s PBS) was reporting costs of some $2 billion — or a thousand times more expensive.

Yeah, yeah, I know, we’ve all had bathroom remodelers like that. But in this case the database had to register some 7 million long guns belonging to some two-and-a-half to three million Canadians. That works out to almost $300 per gun — or somewhat higher than the original estimate for processing a firearm registration of $4.60. Of those $300 gun registrations, Canada’s auditor general reported to parliament that much of the information was either duplicated or wrong in respect to basic information such as names and addresses.

So it was decided that the sclerotic database needed to be improved.

But it proved impossible to “improve” CFIS (the Canadian Firearms Information System). So CGI was hired to create an entirely new CFIS II, which would operate alongside CFIS I until the old system could be scrapped. CFIS II was supposed to go operational on January 9, 2003, but the January date got postponed to June, and 2003 to 2004, and $81 million was thrown at it before a new Conservative government scrapped the fiasco in 2007. Last year, the government of Ontario canceled another CGI registry that never saw the light of day — just for one disease, diabetes, and costing a mere $46 million.

But there’s always America! “We continue to view U.S. federal government as a significant growth opportunity,” declared CGI’s chief exec, in what would also make a fine epitaph for the republic. Pizza and Mountain Dew isn’t very Montreal, and on the evidence of three years of missed deadlines in Ontario and the four-year overrun on the firearms database CGI don’t sound like they’re pulling that many all-nighters. Was the government of the United States aware that CGI had been fired by the government of Canada and the government of Ontario (and the government of New Brunswick)? Nobody’s saying. But I doubt it would make much difference. Asked by Mother Jones to explain why Obama the candidate uses the Internet so effectively but Obama the government is a bust, his 2008 tech maestro Clay Johnson put it this way: “The first person that you need in order to start a Web company would be a Web developer; the first person you need to start a government-contracting firm is an attorney.” The problem with Obamacare isn’t the website design, it’s the nature of government procurement in an unaccountable bureaucracy serving 300 million people.

Despite the best efforts of President Obama and doting tweeters in Jersey City, government isn’t groovy. The standard rap on Obamacare is that it’s turned America’s health system into the DMV. If only. I had cause to go to the DMV in Twin Mountain, N.H., the other day. In and out in ten minutes. Modest accommodations, a little down-at-heel, nothing cool about it at all. But it worked just fine. Friendly chap, no complaints. Government can do that at the town level, county level, even (more sparingly) at the state level.

But a national medical regime for 300 million people? Not in a First World country. And, when you’re mad enough to try it, the failure is not the insignificant enrollment numbers, but the vaporization of the existing health plans of 119,000 Pennsylvanians, 160,000 Californians, 300,000 Floridians, 800,000 in that tech tweeter’s New Jersey . . . That’s the magic that happens when you disdain the limits of prosaic, humdrum, just-about-functioning government. Perhaps things will get so bad the coolest president ever will no longer seem quite so hip. But, alas, you’ll have to wait three years for a hip replacement. That’s government health care for you.

— Mark Steyn, a National Review columnist, is the author of After America: Get Ready for Armageddon. © 2013 Mark Steyn
Posted by jtf at 10:33 PM