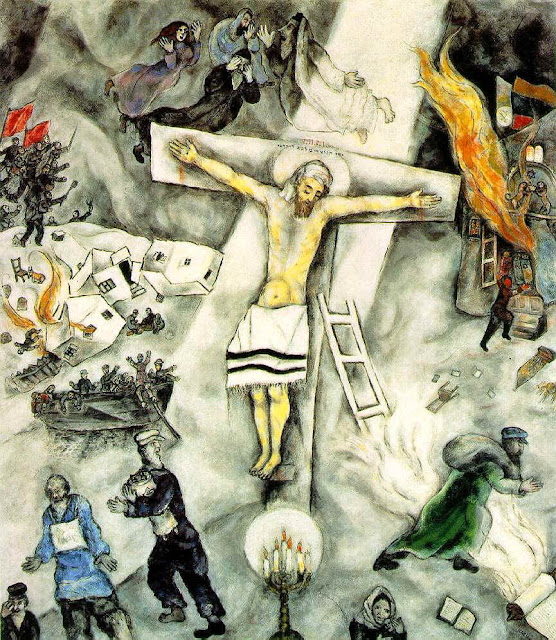 In preparation for this piece I asked FB friends what images the name Marc Chagall (1887-1985) conjured up for them. “Blue,” someone said. “Windows at the Paris Opera and the Chicago Museum” said someone else. “Murals at The Metropolitan Opera” others said alluding to the giant murals hanging at the entrance to the opera house visible to the Lincoln Center Plaza and from Columbus Avenue. Heidi Shott said, “Windows in the Fraumünster Church in Zurich. First trip to Europe at 20. Took my breath away.”
Someone else quoted lines from the movie Notting Hill: “happiness isn't happiness without a violin-playing goat.” Another lent me Chagall’s illustrations of the Bible. Still others spoke of exhibits of his work they attended: at a Chagall retrospective in Paris, for example, Jane Redmont remembers a video in which the interviewer asked Chagall a question like "why are there so often cows inside women" or "women inside cows" or "why is there a cow inside that woman.” Chagall smiled and said "They're just there!" “I've never forgotten that,” Jane said. Several people mentioned crucifixion scenes, and one person posted Chagall’s painting “The White Crucifix.”

We went to see the current exhibit “Chagall: Love, War and Exile” at the Jewish Museum in New York City last week. It’s on until Feb 2, 2014. I was astonished to discover that the focus of the exhibit is on a roomful of paintings featuring Crucifixion scenes drawn and painted within a short time span. Chagall apparently produced over 100 paintings and drawings of the crucifixion. So I tried to find what he wrote about them. Of his first crucifixion scene he explains: “for me Christ has always symbolized the true type of the Jewish martyr. That is how I understood him in 1908 when I used this figure for the first time…I was under the influence of the pogroms.”

“Rarely exhibited and often misunderstood,” the catalog says, the Crucifixion scenes in the exhibit were produced in the years surrounding World War II when Chagall lived in France, then briefly in the US to escape the war in Europe, and then again after the war in France. By concentrating on Chagall’s work during the Holocaust years, and on the Crucifixion scenes in particular, the exhibit shows a darker side of the artist. What does any visitor to the exhibit, regardless of religious conviction, make of these paintings and drawings? I found them riveting. To exhibit images of the Crucified Christ by a Jewish artist in the context of the Holocaust raises fascinating questions: what makes an image of the Crucifixion theological? How and in what ways is the image of a crucified Christ a non-Christian symbol?

The exhibit’s Crucifixion scenes are very different: there are paintings including figures with halos, as in “Exodus” (1952-66), and “Christ in the Night” (1948). In a self-portrait, “The Artist With Yellow Christ” (1938), Chagall turns the face of himself as artist at the foot of the cross away from the figure on the cross. In “Descent from the Cross” (1941), the letters “MARC CH” replace the traditional “INRI” on the cross, and an angel holds a palette and brush. In most paintings, Jesus hangs upon the cross with a tallit, a Jewish prayer shawl around his waist. And there are other figures in the scene: figures at the foot of the cross including a person with a ladder, a mother and child Madonna type, angels and Torah scrolls.

The number and intensity of paintings produced in 1941, “Christ Carrying the Cross,” “Descent from the Cross,” and “The Painter Crucified,” makes that year a turning point, I think. In 1941 Chagall was preparing to leave Europe. By June of that year he was in New York. An ink drawing “Christ carrying the Cross” of that same year drawn before leaving Europe shows other crucified figures, pogroms and smoke in the background towards which a figure helping Christ carry the cross is looking.

By painting Crucifixion scenes, many Jews believed Chagall had rejected Judaism. And it seems that some Christians regarded his recourse to Christian symbolism as “naïve and misguided.” Yet Chagall’s electric choice of the image of a crucified Jewish Jesus to express the suffering and slaughter of Jews and others in the Second World War not only claims the Crucified Jesus as Jewish but reverses the mistaken trope in which Jews were blamed for the death of Jesus by presenting a Crucified Jesus to personify Jewish suffering and bring it to the attention of the world. Chagall’s images of a Crucified Jewish Jesus reach out and present to any who care to see embodied images of both suffering and atonement at the darkest hour of the Holocaust.

Dr. Deirdre Good is professor of New Testament at The General Theological Seminary, specializing in the Synoptic Gospels, Christian Origins, Noncanonical writings and biblical languages. Her blog is called On Not Being a Sausage.
Posted by Ann Fontaine on October 21, 2013 7:04 AM | Permalink | Digg this
Posted by jtf at 5:54 AM