James Fisher III read this
ATLANTA – The opening bars to One Shining Moment were echoing through the Georgia Dome, the first highlights kicking in on the huge screens in each end zone, and Joanne Pitino wasn't going to miss it without being by her husband's side.
So she ran through the Louisville Cardinals national championship confetti on the floor, took a spot next to Rick and threw her arms around him. Together, the two embraced, leaned on one another and looked up to enjoy the song. Thirty-seven years married and still celebrating the good times.
"I'm so proud of him," Joanne said. "Just so proud." 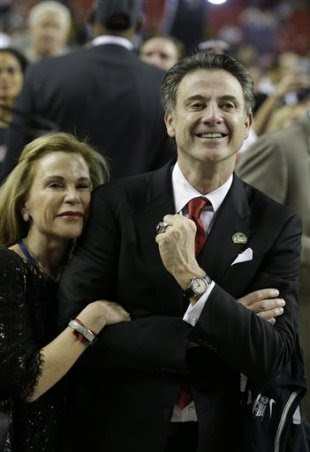 Louisville head coach Rick Pitino with his wife Joanne as the Cardinals celebrate. (AP)Soon her lips were pressed tight as she fought back welling tears at the entire deal, the swings of emotion of a forever day for the family.
Postgame, there was a bit of everything. There were moments of silliness and joy, such as Pitino laughing about how he was going to live up to a deal he made with his players about getting a tattoo if they won the national title. With an 82-76 victory over Michiganaccomplished, his fate was sealed.
Sixty years old and for decades the most polished and properly presented coach in America, one who never let a thread of an Armani get frayed, Pitino was going to get inked up. "He would've killed us if we had gotten a tattoo," his son Richard said before shaking his head at the thought of his dad, of all people, with art.
Then there were moments of profound respect. Pitino presented the Hall of Fame jersey he received that morning to signify his coming induction to Joanne's sister, Mary Minardi. He cited her strength in raising three children and defeating alcoholism after losing her husband to a New York City cab accident and a brother in the Sept. 11 terrorist attacks – "she's the Hall of Famer in our family," Rick said.
Finally there was Pitino gathering everyone on a stage for a family photo. He and his wife in the middle, children and grandchildren, nieces and in-laws all gathered around, the whole clan smiling and making Louisville "L's" with their hands.
[Y! Sports Shop: Buy Louisville national champs merchandise]
The Pitino family has been through hell and back – deaths, including one of a child, that make no sense; scandal, including a highly-publicized one-night stand turned embarrassing extortion attempt, that were self-made.
Through it all, thick and thin, there they were … together.
There aren't any perfect families in America, and the Pitinos aren't claiming to come even close. They do carry on though, and for all those nights of heartbreak and humiliation, here they were going to take the chance to smile and hug and marvel at what staying the course can accomplish.
"We've had a rough go, our family," Pitino said. "We're a family that's had a lot of difficult times. That being said, no one celebrates like the Pitinos and the Minardis. No one. We celebrate together. My children, they have a lot of Irish in them the way they celebrate."
[Slideshow: Zany fans at the NCAA championship]
So yes, the family was probably off to try to drink Atlanta dry and why not? This entire magical run of a season was the cap of a rebirth of a career and a sporting personality who just a few years back was the punchline of a million jokes.
For a man who always sought the perfect look, the perfect suit, the precise appearance, the entire thing could've sent every part of his life reeling. Instead he buckled down and kept going, trying, he said, to be a better husband, a better father, a better coach and a better man each day. It's all he could do.
"We just said, 'we're going to put blinders on and go,' " said his friend and U of L athletic director Tom Jurich.
"I knew he could do this again," Joanne said of coaching another team to the title. "He has the capacity to nurture and love so much."
So here he was arm and arm with the family, and laughing and joking with his players, who were giddy over the coming trip to a tattoo parlor.
"He should get a lower-back tattoo," Cardinals guard Peyton Siva said before laughing at the absurdity. "He said, 'does it sting?' "
[Slideshow: Cardinals celebrate national championship]
"I don't think he knew what he was getting into when he signed up for that one," Final Four MOP Luke Hancock said, laughing as well. 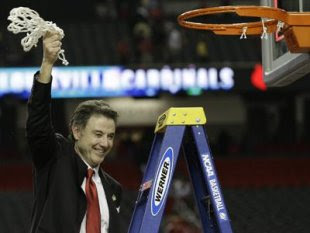 Rick Pitino cuts down the net after winning his second national title on Monday. (AP)Pitino could only shake his head at it all. He's 60 suddenly going on 20. They used to say that back when he was an actual college student at Massachusetts, he was so focused on maximizing his game and planning for his career that he barely took a second to soak in the fun of being young. And with the smiles and self-deprecating jokes of this championship run, he, at least from the outside, appears to be enjoying it more than that one with the loaded Kentucky team. Back then winning it all was expected and it was time for a coach of Pitino's ability to accomplish it.
Even then, clipping the nets was just a step in the process. He was focused on trying to repeat [UK would lose, in overtime, in the title game a year later]. Then he was off to attempt to rescue the Boston Celtics. He was always climbing. Always looking for something else.
At that moment, he'd only known professional success. By now he's failed and fallen, been beaten up and kicked while he was down and is well aware that plenty of it was his own fault. So now, he was just reveling in the glory of this title, not taking a moment of the good times for granted.
So a tattoo? Ah, after all of this, why the heck not?
"I'm just very proud of him, what he was able to come back from is pretty remarkable," Richard Pitino said. "He's the best coach on the planet, he's proven that."
The Pitinos didn't need to win a basketball game Monday night to appreciate what they have, a big extended group that in the end loves each other desperately.
"We have tough moments like everybody has," Richard said. "To be able to share that type of moment on this stage is very special."
It hasn't always easy. It hasn't always been right. It may make that coming celebration even greater than ever.
NCAA tournament video from Yahoo! Sports