We've forgotten what belongs on Page One. 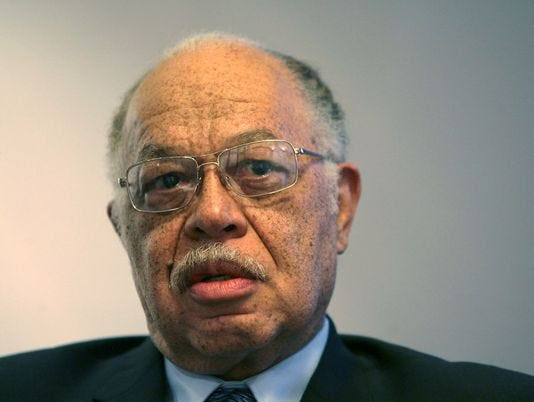 Infant beheadings. Severed baby feet in jars. A childscreaming after it was delivered alive during an abortion procedure. Haven't heard about these sickening accusations?
It's not your fault. Since the murder trial of Pennsylvania abortion doctor Kermit Gosnell began March 18, there has been precious little coverage of the case that should be on every news show and front page. The revolting revelations of Gosnell's former staff, who have been testifying to what they witnessed and did during late-term abortions, should shock anyone with a heart.
NBC-10 Philadelphia reported that, Stephen Massof, a former Gosnell worker, "described how he snipped the spinal cords of babies, calling it, 'literally a beheading. It is separating the brain from the body." One former worker, Adrienne Moton, testified that Gosnell taught her his "snipping" technique to use on infants born alive.
Massof, who, like other witnesses, has himself pleaded guilty to serious crimes, testified "It would rain fetuses. Fetuses and blood all over the place." Here is the headline the Associated Press put on a story about his testimony that he saw 100 babies born and then snipped: "Staffer describes chaos at PA abortion clinic."
"Chaos" isn't really the story here. Butchering babies that were already born and were older than the state's 24-week limit for abortions is the story. There is a reason the late Democratic senator Daniel Patrick Moynihan called this procedure infanticide.
Planned Parenthood recently claimed that the possibility of infants surviving late-term abortions was "highly unusual." The Gosnell case suggests otherwise.
Regardless of such quibbles, about whether Gosnell was killing the infants one second after they left the womb instead of partially inside or completely inside the womb — as in a routine late-term abortion — is merely a matter of geography. That one is murder and the other is a legal procedure is morally irreconcilable.
A Lexis-Nexis search shows none of the news shows on the three major national television networks has mentioned the Gosnell trial in the last three months. The exception is when Wall Street Journal columnist Peggy Noonan hijacked a segment onMeet the Press meant to foment outrage over an anti-abortion rights law in some backward red state.
The Washington Post has not published original reporting on this during the trial andThe New York Times saw fit to run one original story on A-17 on the trial's first day. They've been silent ever since, despite headline-worthy testimony.
OUR VIEW: If Plan B goes OTC, common sense suffers
OPPOSING VIEW: 'Plan B' contraception ruling correct
COLUMN: No woman should have to wait for Plan B
Let me state the obvious. This should be front page news. When Rush Limbaugh attacked Sandra Fluke, there was non-stop media hysteria. The venerable NBC Nightly News' Brian Williams intoned, "A firestorm of outrage from women after a crude tirade from Rush Limbaugh," as he teased a segment on the brouhaha. Yet, accusations of babies having their heads severed — a major human rights story if there ever was one — doesn't make the cut.
You don't have to oppose abortion rights to find late-term abortion abhorrent or to find the Gosnell trial eminently newsworthy. This is not about being "pro-choice" or "pro-life." It's about basic human rights.
The deafening silence of too much of the media, once a force for justice in America, is a disgrace.
Kirsten Powers is a member of USA TODAY's Board of Contributors, a Fox Newspolitical analyst and columnist for The Daily Beast.
Posted by jtf at 6:31 PM

Email ThisBlogThis!Share to TwitterShare to FacebookShare to Pinterest
Labels: Abortion and Life Issues, Media and Culture