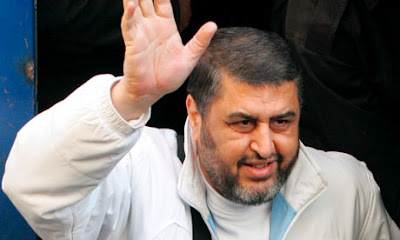 The Muslim Brotherhood swore up and down that it wouldn’t seek the Egyptian presidency as proof of its desire for a pluralistic society. At the last minute, the Brotherhood nominated Khairat el-Shater. According to the New York Times, State Department officials actually look at this as a good thing that could stop the more puritanical Salafists from winning.

“State Department officials said they were untroubled and even optimistic about the Brotherhood’s reversal of its pledge not to seek the presidency,” the Times reports.

Shater has had extensive contact with U.S. officials and has convinced them that he’s not to be feared. Apparently, these U.S. officials have forgotten about (or never were informed of) the Muslim Brotherhood’s ideology and history.

The Brotherhood’s leaders preach a strategy of “gradualism” towards “mastership of the world.” Hamas has officially added “a branch of the Muslim Brotherhood-Palestine” to its name. The Vice Chairman of the Brotherhood’s Freedom and Justice Party says Hamas is a “resistance group” and that Cairo should host one of its offices. The Brotherhood’s leaders are not shy about their goal of destroying Israel and its internal documents refer to its “work in America as a kind of grand jihad in eliminating and destroying Western civilization from within.”

In November, a Brotherhood spokesman stated without equivocation, “The Sharia, the Muslim legal framework, must be the foundation for everything.” On November 24, senior Brotherhood leaders publicly preached violent jihad, and the International Union of Muslim Scholars, a Brotherhood entity, declared that it is time to “revive the duty of jihad in all its forms.” One top leader, Mohamad Katatni, predicts that the revolution in Egypt would lead to the elimination of the state of Israel.

The State Department’s welcoming of Shater’s candidacy is partly due to fear of the Salafist candidate, Hazem Salah Abu Ismail. He is outwardly hostile to the West. The Salafists shocked the West when they won nearly one-fourth of the vote in Egypt’s elections. The latest poll shows that Ismail leaped forward from as low as fifth place to second place at 22%, about 10% behind the secularist presidential frontrunner, Amr Moussa.

Ismail is happy about Shater’s candidacy. He believes that it will take votes away from Abdel Moneim Aboul Fotouh, a Muslim Brotherhood leader whose membership was suspended when he ran for president against the leadership’s wishes. He’s currently polling at 8%. The election is held in May, and if no single candidate gets more than 50% of the vote, a run-off is held between the top two candidates the next month. If it comes down to Moussa and Ismail, the Islamists will rally behind Ismail and give him a landslide victory.

Another reason for the welcoming of the Brotherhood’s presidential campaign by some senior U.S. officials is that it is looked upon as a “moderate Islamist” group that can counter Al-Qaeda and similar jihadists.

Director of National Intelligence James Clapper said in January that “Al-Qaeda probably will find it difficult to compete for local support with groups like the Muslim Brotherhood” and that “non-violent, pro-democracy demonstrations challenge Al-Qaeda’s violent jihadist ideology and might yield increased political power for secular or moderate Islamist parties.”

When the Brotherhood’s second-in-command said it would “not recognize Israel under circumstances and might put the peace treaty up to a referendum,” State Department spokeswoman Victoria Nuland brushed it off as the opinion of just one Brotherhood member. “We have had other assurances from the party with regard to their commitment not only to universal human rights, but to the international obligations that the government of Egypt has undertaken,” she said.

William Taylor, the State Department official overseeing U.S. aid to the countries affected by the Arab Spring, struck a similar tone when he was asked about why his office was giving election training to Brotherhood members. “What we need to do is judge people and parties and movements on what they do, not what they’re called,” he replied.

The second part of Taylor’s answer exposed his ignorance of what the Brotherhood preaches. He said, “as long as parties, entities do not espouse or conduct violence, we’ll work with them.” The U.S. “should not be afraid of [the Brotherhood]. We should deal with them,” he feels. All indications are that the options are not good for the direction of Egypt. Islamic theocracy is the ultimate destination — the only question is whether the country will arrive there by street car or speeding train. And so far, the Obama administration’s role has only been to make this transition more expeditious.

- Ryan Mauro is a fellow with http://www.RadicalIslam.org, the founder of http://www.WorldThreats.com and a frequent national security analyst for Fox News Channel. He can be contacted at ryanmauro1986@gmail.com.
Posted by jtf at 9:58 AM