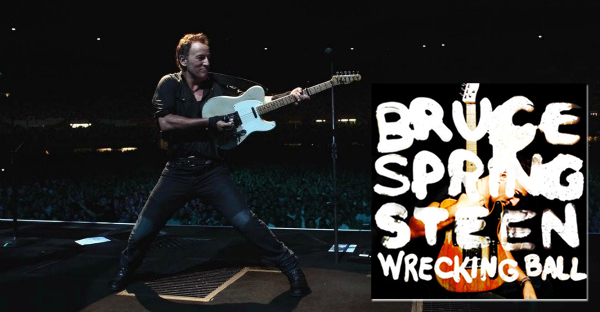 All those listening to Bruce Springsteen’s new album "Wrecking Ball" piecemeal, via leaks and previews, should do yourselves a favor: Stop and wait for the full release on March 6.

I know you can’t help it. But this well-written, well-sequenced and frequently moving album is best experienced in a single sitting — from its initial cry for reconciliation to its final, graphic description of the resurrection of the saints.

Springsteen has always drawn heavily from the lessons of his Catholic upbringing, and that has never been more apparent than it is on the 11-track "Wrecking Ball." He’s as angry as advertised about the state of the nation, and his downtrodden narrators have hard words — and even a few bullets — for those they deem responsible for the destruction of the American Dream and the sense of community and purpose that goes along with it.

But the Boss is nowhere near as distraught as he was on "Devils and Dust," as frustrated as he was on "Magic" or as ungrounded as he sometimes seemed on "Working on a Dream." Instead, he sings often (and frequently in Biblical language) of perseverance through tough times, a new world breaking through the old, and salvation for those who keep faith and compassion alive. The album is firmly on message throughout: In this presidential election year, Springsteen is making sure that no well-meaning aspirant to political office misinterprets his lyrics. If that robs his writing of some of its mystery, he’s made up for it in confrontational muscle and compassion for his characters. Think of "Wrecking Ball" as "The Rising" with the financial crisis in the place of the 9/11 attacks and their aftermath, and you won’t be far off.

You’ll hear plenty of echoes of "The Seeger Sessions," too, and not just in the set’s populist politics.

"Wrecking Ball" is not an E Street Band album. Max Weinberg only appears on two songs: The title track, which uses the destruction of Giants Stadium as a metaphor for resilience, and "We Are Alive," which aligns Jesus with slain union workers and those who died fighting for civil rights. The late Clarence Clemons’ final spotlight moment comes on the epic "Land of Hope and Dreams," the "Wrecking Ball" song most reminiscent of ’70s and ’80s E Street recordings. (Clemons plays on the title cut, too, but his solo is more subdued.) E Streeters Garry Tallent, Roy Bittan, Nils Lofgren and Steven Van Zandt are nowhere to be found. Instead, Springsteen and producer/bassist Ron Aniello — who seems to get the Boss better than his last producer, Brendan O’Brien, ever did –— lean hard on Seeger Sessions Band alumni. Accordionist Charlie Giordano, violinist Soozie Tyrell, banjoist Greg Leisz and horn players Ed Manion, Art Baron, Clark Gayton and Curt Ramm are all over this set, and their presence allows Springsteen to reach back to the joyous, ramshackle folk-rock of the "Seeger" project — the last time the Boss sounded truly energized on record.

"Death to My Hometown" is a highly enjoyable exercise in Flogging Molly-style Celtic punk (the Boss even puts on a not-too-shabby Irish accent). The swaggering "You’ve Got It" bursts midway into a brass-spiked roadhouse celebration. "Shackled and Drawn," a piece of protest folk narrated by an exploited working man, concludes in church with a call to spiritual arms. The gospel influence on "Wrecking Ball" doesn’t run terribly deep, but helps position Springsteen as a street sermonizer offering comfort, guidance and some carefully weighed fighting words.

And preach he does. In case the listener somehow misses the moral dimensions of opening track "We Take Care of Our Own," Springsteen reminds us later, in the downcast "Jack of All Trades," that caring for each other was Jesus’ injunction to humanity. Saints and sinners ride the train to salvation together on "Hope and Dreams" and the Calvary cross casts its long shadow over "We Are Alive." "Rocky Ground," which revisits the sound of "Streets of Philadelphia" and contains a brief rap by gospel singer Michelle Moore, fits Noah’s flood and the Gospel story of Jesus and the money changers into the same stanza. (On the back half of the album, murderous rage at bankers and robber barons fades into testaments of faith and mercy.)

Even those who can’t stand the moralizing Springsteen will find much to delight in here: the Boss’ pained, evocative vocal delivery on "This Depression," the boxing-movie soundtrack strings on "We Take Care of Our Own," the piano chords ringing like a church bell on "Shackled and Drawn," the crowd-pleasing references to the football Giants and Meadowlands mosquitoes on the title track.

"Wrecking Ball" is a genuine grower: It is likely to reveal new dimensions as we live with it, as many other Springsteen sets have. It lacks the theological depth of "Devils and Dust" or the celebratory feel of the Seeger project, and there’s no song here as irresistible as "Girls in Their Summer Clothes" from "Magic." But in a moment of intense economic and spiritual confusion, the most direct album Springsteen has ever cut may be exactly what we need.
Posted by jtf at 9:41 AM

Tris, that is a well thought out,insightful review. Saw Bruce on Fallon with Death to my Hometown and Jack of all Trades with the music having an Irish feel and haunting horns and strings respectively. The lyrics stand up to the music and as you say its worth giving it a chance... hope he's right about that light of a new world coming that he sees in Jack Thanks