Why Bruce Springsteen is the Boss for life

Singers come and singers go, but for Sarfraz Manzoor Bruce Springsteen has been the man to follow ever since he first heard him 25 years ago. 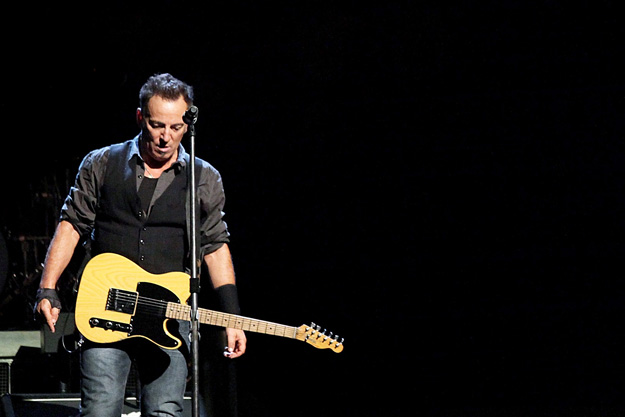 It was the autumn of 1987; the year Margaret Thatcher was elected prime minister for the third time, the year of Wall Street and Dirty Dancing, and it was the year I turned 16. I was a bored, restless and frustrated teenager. My father, a first generation immigrant from Pakistan, had spent years working on a production line at the Vauxhall car factory before being made redundant. My own future prospects were not promising: kids from my background – working class, comprehensive educated, Asian – weren’t visible in the popular culture and the assumption was that after an education I would settle into a solid, unexciting job and eventually marry a solid, unexciting woman. I aspired to more but the life I dreamt about seemed impossibly out of reach.

It was into this world that Bruce Springsteen entered when I started sixth-form college and met a boy called Amolak who told me that Springsteen’s music contained the secrets to the most profound questions about life and love. Initially, I was not convinced, and I countered with the criticism that even now the ignorant and foolish level at Springsteen: that he was a rich man making money by singing about the poor. Fortunately my friend convinced me to set aside my prejudices and listen to the music. It turned out that he was right.

Unlike Morrissey – whose very English rendering of alienation appeared arch and whining – Springsteen was always able to find some hope amid the desolation. There was always, to quote the title of one song, a reason to believe. In my fervour, I created a Bruce Springsteen folder into which I put articles on him and photocopied song lyrics that I studied with the intensity usually reserved for religious texts. People laughed; they thought it amusing to see an Asian teenager so pathologically drawn to the music of this almost hyper-American artist.

I tried to explain the parallels – that Springsteen was also once a working-class kid from a motor town, that he too had endured a conflicted relationship with his father and that his music was more subtle and complex than the fist pumping stereotype suggested.

Songs like "Factory" evoked the drudgery of the sort of work my own father had done and which I was determined not to follow; "Thunder Road" with its rousing final words of “it’s a town full of losers and I’m pulling out of here to win” summed up how I felt about living in a town that seemed too small for my dreams; "Independence Day", a song about fathers and sons was where I turned when I grew frustrated with my dad, and "Bobby Jean" was the song that described my friendship with Amolak: “Now you hung with me when all the others turned away, turned away, turned up their nose, we liked the same music, we liked the same bands, we liked the same clothes.” As if the words were not enough, they were underscored by music that could be gloriously anthemic or starkly spare: Clarence Clemons’s saxophone solo in "Jungleland", Roy Bittan’s haunting piano on "Racing in the Street", Danny Federici’s spectral keyboards on "Wreck on the Highway" and Springsteen’s searing guitar solo on "Prove it All Night".

It was a heady brew which is why I did not mind the abuse: I preferred to be laughed at for my music taste than for the colour of my skin. My racial, religious and class identities had been imposed on me and so I relished the fact that my identity as a Springsteen fan was one I had freely chosen. I didn’t so much listen to "Thunder Road", "The River" and "Born to Run" as mainline them directly into my heart. His songs gave me the shot of confidence I needed to believe that my destiny was not shaped by my past.

It worked. I am no longer the 16-year-old teenager dreaming of better days but a 40-year-old man blessed with a job as a writer and broadcaster that I love hugely and a wife and daughter I love even more. I have always credited Bruce Springsteen for inspiring me to aim higher than was expected of me and in an effort to convince others of both his greatness and his influence in my life I wrote a childhood memoir Greetings from Bury Park, which describes growing up in the Eighties and having my life transformed by Springsteen.

I wrote it partly to thank him for what he had meant to me but although I have been fortunate enough to meet him a number of times, I had no idea if he had even heard of my book. You can imagine my shock and delight then when I met him at a BFI party and he came up to me to say that not only had he read my book but he had loved it. Such are the privileges of my present life.

As the years have passed, so my relationship with Springsteen’s music has necessarily evolved. In my twenties and early thirties, I hurtled around the globe for the sake of Bruce. I flew to the United States to see him in New Jersey and New York, and I travelled to Europe to see him in Spain, France and Sweden. When he played six nights at Wembley Arena in the summer of 1992, I slept outside the venue for two nights to ensure I had front row seats for all six nights. In more recent years, I have spent rather less time sleeping on concrete but Springsteen’s music continues to occupy a special place in my life. I am currently writing a feature film screenplay based on my book which Gurinder Chadha – of Bend It Like Beckham fame – is hoping to direct.

My life has changed hugely from when I first stumbled on to him but listening to Springsteen is about more than a misty-eyed longing for glory days – indeed he has arguably more to say today than ever before. Consider his latest record, Wrecking Ball, released next month and reviewed above right. It is possibly the angriest and most politically direct album he has ever made. The songs were inspired by the financial crisis of 2008 and its impact on ordinary people. The new record is the latest in a series of albums that include Nebraska, The Ghost of Tom Joad and The Rising that amount to state-of-the-nation dispatches from an artist fully engaged with the times.

His nickname is The Boss but I prefer to think of Bruce Springsteen as rock music’s head of state: the people’s president. Contrast that with an artist like Madonna – a fellow Eighties icon who also has a new album out this spring – but who is so obsessed with remaining current she can’t help but appear dated. Springsteen may have rarely been hip but he also has never been embarrassing – he hasn’t acted in any dodgy films, nor has he published any children’s books or launched a fashion line or a range of his beauty products.

That partly explains why he commands such devotion among his fans. His later records may not always scale the titanic heights of his greatest works but he has held on to his integrity and, on stage, he remains utterly compelling: the greatest live performer in rock. His concerts have the ecstatic air of a revivalist gathering and one of the most invigorating aspects of seeing Springsteen on tour is realising that there are others – hundreds of thousands of others – who feel the same way about him as you do.

When I first saw Springsteen at Wembley Stadium in 1988 I was one of the youngest in the crowd; I recall meeting people who had seen him on his mythic debut British show at the Hammersmith Odeon in 1975. They seemed so worldly and grizzled to me even though they were probably only in their thirties. Now when I see him I am one of the veterans who can bore others for hours with tales of the Tom Joad tour and seeing Springsteen play a tiny venue in Asbury Park.

In recent years, Springsteen has gained a new generation of fans, some of whom were not even born when I first saw him and who have come to him through artists such as Arcade Fire, the Gaslight Anthem and the Killers who have all openly admitted their debt to his music. Once you get on the Springsteen train you rarely disembark, which is why his fans have grown older with him. Since he has always written to his age he is not like, say, Mick Jagger, condemned to prance on stage, the eternal priapic Jumping Jack Flash. When you are young the songs of Born to Run appeal with their widescreen cinematic idealism and then as life coats that romanticism with heartbreak and disappointment, the bruised love songs on Tunnel of Love start to make sense. Working on a Dream, released three years ago when he was 60, swirls with references to death and mortality, themes which evidently mean more to him today – following the deaths of Federici and Clemons – than they did in the past, and more to me now than they did when I was 16.

In the years that I have been listening to Springsteen, his music has been a source of wisdom as I fought to find my own place in this world and have a life where work was rewarding and love was real. Springsteen and the E Street Band start their world tour next month and it reaches Hyde Park in July. Among those in the audience will be Amolak, his wife and baby son, as well as me, my wife, Bridget, and my daughter Laila who will then be 11 months old. Laila is only in this world because I found the courage to defy expectations, a courage that was strengthened by listening to Springsteen. And that is why, after 25 years, Springsteen’s music remains so special to me: it is an eloquent reminder of the journey I have taken in my life and it is a wise guide for the road ahead.