He never let the bastards get him down. 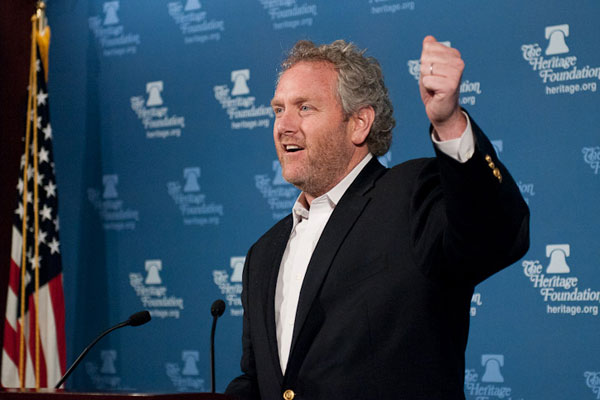 Andrew Breitbart’s heart was too big to fail, but it did anyway.

If you don’t know who Breitbart was, you haven’t been paying attention. A conservative activist, entrepreneur, author, muckraker, media pioneer, and performance artist of sorts, in his heart he was a radical.

His friends saw him as a fearless truth-teller and provocateur. (The word “fearless” will have to be retired from overuse when all of his obituaries have been written.) His enemies, and they are legion even in death, saw him as the most vile creature who ever slithered upon the earth.

Within hours of the news, Twitter lit up with repugnant and ghoulish statements from left-wingers celebrating the premature death of a man with four small children. I won’t repeat them because the printable ones aren’t representative, and the representative ones aren’t printable.

Andrew relished such attacks, truly, because they proved to him that he was having great effect in his work and that his opponents had run out of serious arguments.

This is not to say that Andrew was beyond criticism. He made mistakes. He took full swings at some pitches he should have just let go. He overstated some things that needed to be said, and said some things that didn’t need to be said at all. He was a human run-on sentence who showed deference to no punctuation mark save the exclamation point, a conservative Tasmanian Devil from the Bugs Bunny cartoons we both grew up on, whirling and whizzing through anything in his path. Giving him a dose of Ritalin to treat his hyperactivity would be like throwing a glass of water on a five-alarm fire.

But the hatred his enemies had for him overshot his faults like a dart thrown past the board and over the moon. Others will talk of his accomplishments: working for the Drudge Report in its infancy, creating websites and businesses, pioneering new forms of media, and exploiting the inherent weaknesses and pieties of the old media. And many who knew him will talk of his personal kindness: how the only times he slowed down were when he needed to lend an ear, do a favor, or talk about how much he loved his family.

Those things matter more than the politics, but they are not what made him a public figure. If being kind and loving your family made you famous, countless plumbers, carpenters, and accountants would be famous too.

No, what made him a public figure is what drove him to leap into battle day after day. Andrew had profound contempt for those on the left who claimed a birthright to a monopoly on virtue and tolerance.

He rejected in the marrow of his bones the idea that conservatives needed to apologize for being conservative or that liberals had any special authority to pronounce on the political decency and honesty of others.

Indeed, when liberals called him (or his heroes) racist, Andrew paid them the compliment of taking them seriously. He truly felt that to call someone a racist was as profound an insult as could be leveled. To do so without evidence or logic was a sin.

He believed, rightly, that much of establishment liberalism hurls such charges as a way to bully opponents into silence, and he would not be bullied. That was why, for instance, he offered a reward of $100,000 (payable to the United Negro College Fund) to anybody who could prove tea partiers hurled racial epithets over and over at black congressmen walking past them to vote on Obamacare, as several alleged. No one got paid because the charge — recycled over and over by the media — was a lie.

The Internet was a boon to Andrew because it exposed liberalism’s undeserved monopoly on the “narrative” — one of his favorite words.

60 Minutes won awards for hidden cameras, but when he used the same technique to embarrass liberals, such tactics were suddenly proclaimed ethically beyond the pale. The joke was on the scolds because they had to cover the stories anyway. And the stories got results. Congress defunded ACORN. Heads rolled at NPR. Andrew understood that news and arguments change politics if you can get the news and arguments to the people — and if you don’t let those who don’t like what you say define you.

Whatever his faults, that was my friend’s great and remarkable strength: He never let the bastards get him down. That took away his enemies’ greatest power, and they hated him all the more for it.

— Jonah Goldberg is editor-at-large of National Review Online, a visiting fellow at the American Enterprise Institute and the author of the forthcoming book The Tyranny of Clichés. You can write to him by e-mail at JonahsColumn@aol.com, or via Twitter @JonahNRO.

Hanging out with the man who led a New Media revolution. 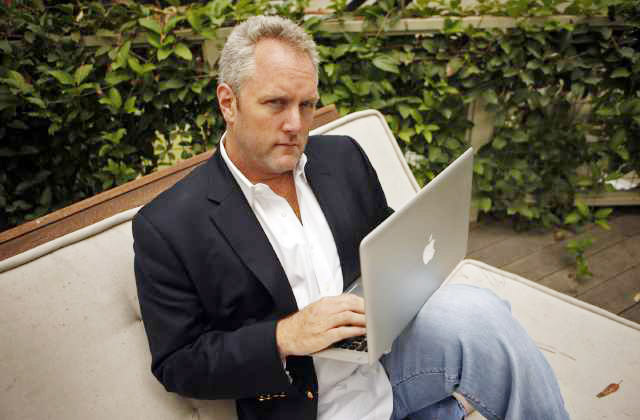 We were both in Troy, Michigan, that night. He was scheduled to speak at the next day's Americans for Prosperity forum. I was in town to cover the Republican presidential primary campaign. Knowing he would be in town, I'd called him earlier, to find out where he would be hanging out, and when he texted me, I called again and learned he was at Morton's steakhouse, down the road from the Marriott Hotel where the AFP conferees were staying. Soon I joined him at Morton's, where we talked a while. He said he had become bored with the GOP presidential race. Instead, he was focused on new angles of attack on the Left. We went over to the Marriott, where Breitbart joined a dozen or so people hanging out in the lobby bar.

Hanging out with Breitbart was an experience that hundreds of his friends and allies had the pleasure of sharing over the years and, when the shocking news of his death came Thursday morning, those people began sharing their stories of a man destined to endure as a legend in the history of the conservative movement. His high-profile public life as a daring provocateur -- who exposed the dirty secrets of the Left and then leveraged his own celebrity to pour the gasoline of publicity on the fires he kindled -- was the tip of a massive iceberg of hard work, generosity, and inimitable genius.

Breitbart was a man of impressive intelligence, possessed of a deep and intuitive understanding of news, politics, and culture. Some of the most talented and experienced journalists of my acquaintance were awed by Breitbart's genius. Long before he'd gained nationwide fame for his work in exposing ACORN and the Anthony Weiner sex scandal, Breitbart was already admired by those who knew of his pioneering work in the development of online New Media, as the former sidekick to Matt Drudge who subsequently helped Arianna Huffington develop the Huffington Post.

The first time I met him was at the 2007 Conservative Political Action Conference. It was near midnight when he came through the hotel lobby with conservative journalist Joel Mowbray. They were on their way up to their hotel room to have a few beers, and I tagged along. Soon, Breitbart was regaling us with tales of his online adventures including the time he spotted police examining a suspicious vehicle parked near a home that was hosting a Hillary Clinton fund-raiser in his Brentwood neighborhood. He posted a brief headline at the Drudge Report, then went into his kitchen to get a snack. As he was walking past his TV on his way back to his computer, he saw that CNN had added the bomb-scare headline to the "crawl" across the bottom of the screen. Such was the impact of this new online medium, and harnessing the power of the Internet to influence news coverage was Breitbart's obsession.

"Changing the narrative," as he often described it, was what Breitbart was all about, and he had studied the habits of the news industry so long and so intensely that he knew exactly how they would react when he began striking back at what he called the "Democrat Media Complex." In the case of the ACORN exposé -- with James O'Keefe and Hannah Giles using hidden cameras to catch officials of the left-wing group agreeing to abet a prostitution operation -- Breitbart first released one video. When ACORN officials insisted that this incident was anomalous, Breitbart then released a second video recorded by O'Keefe and Giles at an ACORN office in another city, where officials were similarly willing to assist plans to pimp out teen hookers. More denials from ACORN ensued, but then Breitbart released another video, and then another and another and another. Reporters who at first had accepted ACORN's denials at face value were eventually forced to acknowledge that Breitbart's young protégés had indeed exposed a willingness of the "community organizing" group to turn a blind eye to criminality. The negative publicity forced ACORN to declare bankruptcy, although the organization lives on in altered form, with various local chapters reconstituting themselves under new names.

The key to the success of that sting was Breitbart's deep understanding of how the news business works, and how people in the industry think and behave. He employed that understanding to powerful effect, and helped others understand it, too. Yet there was only one Breitbart, and his unexpected death at age 43 leaves a huge vacuum in the world of conservative New Media that he did so much to build. By the time of his death, he had become a hero to millions, an inspirational leader. Breitbart was a popular speaker at Tea Party rallies and other conservative gatherings, and always spoke extemporaneously, without a text or notes to guide him.

The last time I saw him, at the AFP Michigan event Saturday, he arrived at the last minute, unshaven and with his hair uncombed, having stayed until the wee hours hanging out in the Marriott lobby. Without any preparation at all, however, he gave a speech that stirred the audience, telling the Tea Party activists that their victory in the 2010 mid-term elections "freaked the living daylights" out of the Left. He talked at length about the Occupy movement, and its strong ties to left-wing organizations -- including labor unions -- that made it "Barack Obama's army." Referring to the fight for the 2012 Republican nomination, he urged his listeners not to focus their attention on the candidates because, he said: "You are needed more than the candidates."

Breitbart was a powerful voice, who always sought to empower others and encourage them to join his fight against the forces of the Left, which he saw as attempting to destroy the America he loved. He will be long remembered by those who had the pleasure of sharing the Breitbart experience.

"Where y'at?" he asked in that text message a week ago.

We're still here, Andrew, still hanging out. But it's just not the same without you.

- Robert Stacy McCain is co-author (with Lynn Vincent) of Donkey Cons: Sex, Crime, and Corruption in the Democratic Party (Nelson Current). He blogs at The Other McCain.

Email ThisBlogThis!Share to TwitterShare to FacebookShare to Pinterest
Labels: Media and Culture, Obituaries