The administration is working with a Muslim Brotherhood jurist. 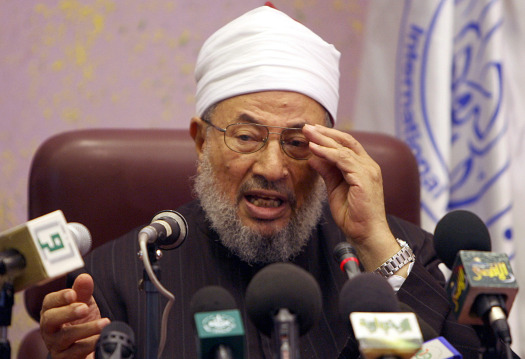 The surrender is complete now. The Hindu reports that the Obama administration has turned to Sheikh Yusuf al-Qaradawi, the Muslim Brotherhood’s leading jurist, to mediate secret negotiations between the United States and the Taliban.

I wrote about Qaradawi at length in The Grand Jihad and, here at NRO, have regularly catalogued his activities (see, e.g., here, here, here, here, and here; see also Andrew Bostom’s “Qaradawi’s Odious Vision”). For those who may be unfamiliar with him, he is the most influential Sunni Islamist in the world, thanks to such ventures as his al-Jazeera TV program (Sharia and Life) and website (www.IslamOnline.net). In 2003, he issued a fatwa calling for the killing of American troops in Iraq. As he put it,


Those killed fighting the American forces are martyrs given their good intentions since they consider these invading troops an enemy within their territories but without their will. . . . Although they are seen by some as being wrong, those defending against attempts to control Islamic countries have the intention of jihad and bear a spirit of the defense of their homeland.

Qaradawi urges that Islam must dominate the world, under a global caliphate governed by sharia. He maintains that Islam “will conquer Europe [and] will conquer America.” He sometimes qualifies that the conquering will be done “not through the sword but through da’wa,” but the qualification is a feint.

Da’wa sounds harmless — it refers to missionary work to spread Islam. Islam, however, is not like other religions. The idea is not to spread a set of spiritual principles but incrementally to impose a full-scale social system with its own authoritarian legal code, covering all aspects of life and instituting a caste system in which women and non-Muslims are subjugated. Nor is da’wa like other missionary work; it is the use of all available means of pressure — political campaigns, lawfare, infiltration of the media, control of the education system, etc. — to advance (a) the acceptance of Islamic principles and (b) the evisceration of principles (e.g., free speech, economic liberty) that undergird competitors, in particular, Western civilization. Moreover, the claim that da’wa is non-violent is frivolous. Much of the mission of da’wa is to rationalize terrorism as divinely mandated self-defense.

Thus does Sheikh Qaradawi champion Hamas, mass-murder attacks, and suicide bombings. “They are not suicide operations,” he brays. “These are heroic martyrdom operations.” Indeed, he elaborates, “The martyr operations is [sic] the greatest of all sorts of jihad in the cause of Allah.”

Thus does Qaradawi urge the destruction of Israel, rebuking clerics who dare counsel against killing civilians. “I am astonished,” he inveighs, “that some sheikhs deliver fatwas that betray the mujahideen, instead of supporting them and urging them to sacrifice and martyrdom.” As the Investigative Project on Terrorism recounts, when the imam of Mecca’s Grand Mosque issued guidance against the killing of civilians, Qaradawi upbraided him: “It is unfortunate to hear that the grand imam has said it was not permissible to kill civilians in any country or state, even in Israel.”

Not surprisingly, then, the sheikh is also wont to invoke what the West refuses to acknowledge: the Jew-hatred that is endemic in Islam because it is rooted in scripture — not in modern grievances that could be satisfied if only the West changed its policies and Israel had the good grace to disappear. As Qaradawi puts it, echoing the charter of Hamas (the Muslim Brotherhood’s Palestinian branch):


This is what is told in the Hadith of Ibn-Omar and the Hadith of Abu-Hurairah: “You shall continue to fight the Jews and they will fight you, until the Muslims will kill them. And the Jew will hide behind the stone and the tree, and the stone and the tree will say: ‘Oh servant of Allah, Oh Muslim, this is a Jew behind me. Come and kill him!’ The resurrection will not come before this happens.” This is a text from the good omens in which we believe.

Qaradawi uses his al-Jazeera platform to preach this message to the Muslim masses. As the Middle East Media Research Institute and Robert Spencer document, in one memorable Friday “sermon” broadcast in 2009, he prayed that Allah would kill all Jews: “Oh Allah, take this oppressive, Jewish, Zionist band of people. Oh Allah, do not spare a single one of them. Oh Allah, count their numbers and kill them, down to the very last one.” He added that throughout history, Allah had imposed upon Jews “people who would punish them for their corruption. The last punishment was carried out by Adolph Hitler.”

After thousands of young Americans have laid down their lives to protect the United States from jihadist terror, President Obama apparently seeks to end the war by asking Qaradawi, a jihad-stoking enemy of the United States, to help him strike a deal that will install our Taliban enemies as part of the sharia state we have been building in Afghanistan. If the Hindu report is accurate, the price tag will include the release of Taliban prisoners from Gitmo — an element of the deal Reuters has also reported. The administration will also agree to the lifting of U.N. sanctions against the Taliban, and recognition of the Taliban as a legitimate political party (yes, just like the Muslim Brotherhood!). In return, the Taliban will pretend to forswear violence, to sever ties with al-Qaeda, and to cooperate with the rival Karzai regime.

It would mark one of the most shameful chapters in American history.

— Andrew C. McCarthy, a senior fellow at the National Review Institute, is the author, most recently, of The Grand Jihad: How Islam and the Left Sabotage America.
Posted by jtf at 8:18 AM