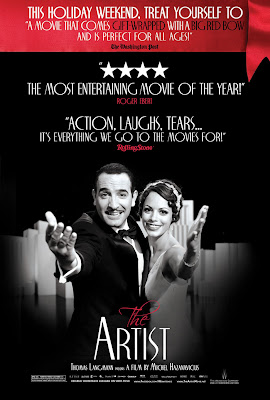 Remember the old days, when movies were glorious, magical and mute? Neither do I. But the passing of the silent era from memory into myth is what “The Artist,” Michel Hazanavicius’s dazzling cinematic objet d’art, is all about. This is not a work of film history but rather a generous, touching and slightly daffy expression of unbridled movie love. Though its protagonist mourns the arrival of sound, “The Artist” itself is more interested in celebrating the range and power of a medium that can sparkle, swoon and suffer so beautifully that it doesn’t really need to have anything to say.

Strictly speaking Mr. Hazanavicius’s film is not a silent movie. There is a lot of music on the soundtrack and also a few strategic moments of onscreen noise that are both delightfully surprising and wildly illogical. The whole conceit of the picture is spun in willful disregard of the laws governing time, space and sound, an embrace of the preposterous that is perhaps more reminiscent of the spirit of early French cinema than of the old Hollywood where the action takes place.

In those days the sign up in the hills said HOLLYWOODLAND, and the screens were dominated by antic clowns, pale heroines and dashing lovers. George Valentin (Jean Dujardin, the star of the popular “OSS 117” series of French spy spoofs, also directed by Mr. Hazanavicius) undoubtedly belongs in that last category. With his shiny hair, radiant teeth and thin mustache — and a surname one vowel short of Valentino — George is a quintessential movie star. The public adores him, and he is far too gracious an entertainer to contradict them. A carefree narcissist, he bounces from the studio lot to the red carpet to the Beverly Hills mansion he shares with his devoted dog and less enchanted wife and co-star (Penelope Ann Miller), secure in the permanence of his glory.

Even viewers entirely innocent of film history — even the young, blockbuster-fed movie fans who find themselves dragged to and then transported by this minor marvel — will anticipate what happens next. George’s pride sets up a fall, first into a sweet, awkward infatuation with an aspiring actress named Peppy Miller (Bérénice Bejo), then into professional ruin brought about by his stubborn refusal to change with the times. Abandoned by his wife and shunned by the studio boss (a wonderfully boisterous John Goodman), with only the dog and his chauffeur (James Cromwell) standing by him, the star goes into eclipse. But even when threatened with the torments of obscurity, he refuses to speak.

The rise of the talkies has almost always been chronicled on film from the perspective of sound. It could hardly have been otherwise. “Singin’ in the Rain,” with its exuberant music and bright colors, does not so much revisit the old splendor of cinema silence as obliterate its memory, much as “Sunset Boulevard” unlocks a world of ghosts and shadows among the remnants of the faded Hollywood pantheon. “The Artist,” as aggressively entertaining as any musical, is measured in its mourning and eclectic in its nostalgia for old movies. There is a bit of music lifted from Bernard Herrmann’s “Vertigo” score, a breakfast-table montage inspired by “Citizen Kane” and a story line that makes “The Artist,” in essence, the latest (and also in a way the earliest, but surely not the last) remake of “A Star Is Born.”

All of this suggests a feast for antiquarian film geeks. It certainly is, and Mr. Hazanavicius’s skill in replicating some of the visual effects of early cinema is impressive. But he evokes the glamour and strangeness of silent movies without entirely capturing the full range of their power. His film is less a faithful reproduction than a tasteful updating, like a reconstituted classic roadster with a GPS device and a hybrid engine.

Still, it is a smooth and very exciting ride. If “The Artist” revels in gimmickry and occasionally oversells its charm, it also understands the deep and durable fascination of the art it embraces. Like Martin Scorsese in “Hugo,” another modern-day journey into a dream of the movie past, Mr. Hazanavicius knows that the audience’s pleasure arises at once from the complex displays of craft in the service of simple, direct effects. We like to be dazzled by the whirring, kinetic machinery, thrilled by the conjuring of what should be impossible and swept away on currents of pure and powerful feeling.

Mr. Hazanavicius accomplishes this with not only showy ambition but also a winning modesty that grows out of an appreciation that popular art is, above all, about the efficient and inventive delivery of fun. Its techniques are impressive and various, though its most persuasive special effects are Mr. Dujardin and Ms. Bejo, physically graceful performers with faces the camera cannot resist. He has a solid athleticism that meshes perfectly with her supple, long-limbed grace, and their features are at once iconic and lively, in the manner of the ancient movie stars to whom they pay tribute.

Thanks in no small part to their expressiveness and dexterity — they dance beautifully and also portray emotion with just the right blend of naturalism and melodramatic exaggeration — “The Artist” is more than a clever pastiche of antique amusements. It may be something less than a great movie, but it is an irresistible reminder of nearly everything that makes the movies great.

“The Artist” is rated PG-13 (Parents strongly cautioned). A few scary moments, an obscene gesture and a lot of smoking.

Opens on Friday in Manhattan. 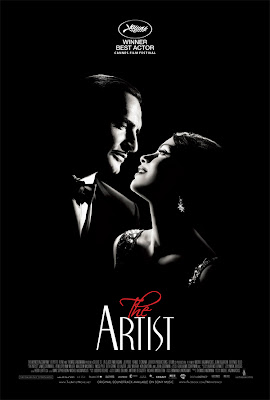 What happens in “The Artist” is simple enough. A film star by the name of George Valentin (Jean Dujardin) streaks across the Hollywood heavens in the late nineteen-twenties, and then, with the advent of sound, gutters and falls. Only the love of a good woman has the power to relight his fuse. To movie nuts reared on “Singin’ in the Rain,” “Sunset Boulevard,” and “A Star Is Born,” this film could hardly be more welcome; I would wager that its writer and director, Michel Hazanavicius, represents the final word in nuthood. But here’s the rub, the sportive twist that prevents his work from being a mere rehash of twice-told tales: “The Artist” is not just about black-and-white silent pictures. It is a black-and-white silent picture. And it’s French.

Two principles are in play here. One, “The Artist” will cleave—far more loyally than Mel Brooks’s “Silent Movie” (1976) did—to the rules of the game, supplying not just printed titles but a breathless musical score, unblushing melodrama, a bouquet of sight gags, a girl with a kiss curl, and a corpulent cop. And, two, Hazanavicius will toy with those rules in the Frenchest possible manner. The very first thing we see, for example, is an open mouth, belonging to a man under interrogation. “I won’t talk. I won’t say a word,” he says. Yet those words themselves go unsaid, flashed up instead on a black screen. He couldn’t talk, even if he crumpled; everything in this world must be seen, not heard. I am tempted to reveal the brief and brilliant exceptions that Hazanavicius provides even to that stricture, but I, too, must keep quiet.

There are notable bit parts in “The Artist,” not least for John Goodman, as a harrumphing bull of a studio boss, and James Cromwell, as a faithful chauffeur and helpmeet, a sort of anti-Erich von Stroheim. Better still, we get Uggy, who plays Valentin’s no less constant mutt, a barking echo of Asta, the wirehaired genius of “The Thin Man,” “Bringing up Baby,” and “The Awful Truth.” It is Dujardin, though, in his portrait of the artist as a dashing mute, who best raises the ghost of an era. The two-second shot in which, on set, as the cameras roll, Valentin locks into a brooding frown—the standby of the questing smolderer—earns a laugh for sheer precision, and, behind such face-making, you sense a lot of homework. He has an oily dab of his compatriot Maurice Chevalier, plus a stronger dose of Douglas Fairbanks, including the neat yet unvillainous mustache and the elastic bonhomie, joshing with camera crews as he does with reverent fans. The most acute reference, however, is to John Gilbert—a top lion at M-G-M in the mid-twenties but dead within a decade, liquidated by drink and the lethal demands of speech.

A crux of “The Artist” finds Valentin toiling on a scene in which he must revolve between partners on a dance floor. One fellow-waltzer is played by Peppy Miller (Bérénice Bejo), a lithe young laugher into whom he has previously bumped. She is a nobody, a casual extra, except that, when they grasp each other en passant, and as take follows take, she becomes, imperceptibly, a somebody. From the crucible of this moment, indeed, she will glow into a leading light in Valentin’s heart, and a movie star in her own right. The gesture intended here, I think, is toward “Flesh and the Devil,” the silent romance that Gilbert made with Greta Garbo, in 1926. They, too, danced lightly but dangerously together, and the motion led them, as if hypnotized, into a garden, where they shared one of the fiercest and most fondant kisses in the history of movies, or of mouths. Gilbert and Garbo, like Valentin and Peppy, fell in love for real, or as real as Hollywood could allow. (“Flesh and the Devil” shows at Film Forum on November 28th, three days after “The Artist” is released. Try both, on a moonstruck night.)

Word of this tacit new film has spread since it showed at Cannes, in May, and much of its allure is due to the speed—eager and uncomplaining—with which you feel the audience, innocents as well as buffs, acclimatizing to its antiquated modes. Here is a crowd-pleaser that makes you glad to be part of the crowd, perhaps because—to adopt the classical viewpoint—silent cinema really was the purest and most binding incarnation of the medium, one from which we have torn ourselves, to our detriment, ever since. That is why “The Artist” seems instantly easy on the mind’s eye, and why we feel a natural tug of resistance when Peppy, the bright spark of sound, declares to an interviewer, “Make way for the young!” What Hazanavicius has wrought is damnably clever, but not cute; less like an arch conceit and more like the needle-sharp recollection of a dream. It is, above all, a Gallic specialty—the intellectual caprice that applies a surprising emotional jolt. One finds the same mixture in Cocteau’s “Orphée,” which transmitted Greek myths as if in a live broadcast, and in Ravel’s “Le Tombeau de Couperin,” which sought not so much to mimic Baroque musical form as to uncover a vitalizing force within the act of homage. When challenged over the seeming levity of the piece, Ravel replied, “The dead are sad enough, in their eternal silence,” and that will stand as a motto for “The Artist”—a spry monochrome comedy that is tinted with regret for the rackety noise and color, as far as we can hope to imagine them, of lost time. Make way for the old!