In a hyperlegalistic culture, Penn State’s collaborators may have the law on their side. But there is no moral liability waiver. 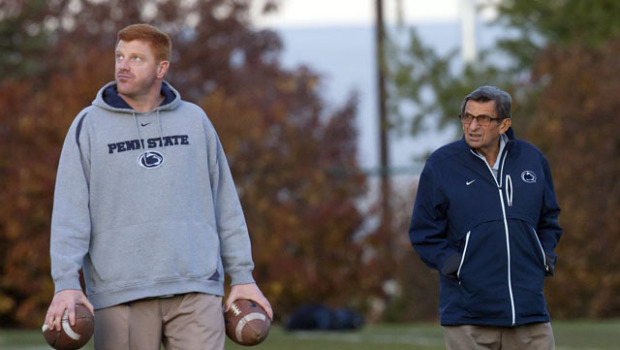 There is a famous if apocryphal tale of a Fleet Street theatre critic covering the first night of a new play in the West End of London. At the end of the evening, he went to a public telephone and dictated his review. The following morning, a furious editor called him and demanded to know why he had neglected to mention that, midway through the Third Act, the theater had caught fire and burned to the ground. The critic sniffily replied that it was not his business to report fires, but that, if the editor had read more carefully, he would have observed that the review included a passage noting discreetly that the critic had been unable to remain for the final scenes.

That, more or less, is the position of those Americans defending the behavior of the Penn State establishment: it would be unreasonable to expect the college football elite to show facility with an entirely separate discipline such as pedophilia reporting procedures, and, besides, many of those officials who were aware of Jerry Sandusky's child sex activities did mention it to other officials who promised to look into mentioning it to someone else.

From the grand jury indictment:

Hold it right there. "The next morning"?

Here surely is an almost too perfect snapshot of a culture that simultaneously destroys childhood and infantilizes adulthood. The "child" in this vignette ought to be the 10-year-old boy, "hands up against the wall," but, instead, the "man" appropriates the child role for himself: Why, the graduate assistant is so "distraught" that he has to leave and telephone his father. He is pushing 30, an age when previous generations would have had little boys of their own. But today, confronted by a grade-schooler being sodomized before his eyes, the poor distraught child-man approaching early middle-age seeks out some fatherly advice, like one of Fred MacMurray's "My Three Sons" might have done had he seen the boy next door swiping a can of soda pop from the lunch counter.

The graduate assistant, Mike McQueary, is now pushing 40, and is sufficiently grown-up to realize that the portrait of him that emerges from the indictment is not to his credit and to attempt, privately, to modify it. "No one can imagine my thoughts or wants to be in my shoes for those 30-45 seconds," he emailed a friend a few days ago. "Trust me."

"Trust me"? Maybe the 10-year-old boy did. And then watched Mr. McQueary leave the building. Perhaps the child-man should try "imagining" the 10-year-old's thoughts or being in his shoes. Oh, wait. He wasn't wearing any.

Defenders of McQueary and the broader Penn State protection racket argue that "nobody knows" would he would do in similar circumstances. In a New York Times piece headlined "Let's All Be Superior," David Brooks turned in an eerily perfect parody of a David Brooks column and pointed out, with much reference to Kitty Genovese et al, how "studies show" that in extreme circumstances the human brain is prone to lapse into "normalcy bias." To be sure, many of the Internet toughs bragging that they'd have punched Sandusky's lights out would have done no such thing. As my email correspondents always put it whenever such questions arise: "Yeah, right, Steyn. Like you'd be taking a bullet. We all know you'd be wetting your little girly panties," etc.

For the sake of argument, let us so stipulate. Nevertheless, as the Canadian blogger Kathy Shaidle wrote some years ago: "When we say 'we don't know what we'd do under the same circumstances,' we make cowardice the default position."

I quote that line in my current book, in a section on the "no man's land" of contemporary culture. It contrasts the behavior of the men on the Titanic who (notwithstanding James Cameron's wretched movie) went down with the ship and those of the École Polytechnique in Montreal decades later who, ordered to leave the classroom by a lone gunman, meekly did as they were told and stood passively in the corridor as he shot all the women. Even if I'm wetting my panties, it's better to have the social norm of the Titanic and fail to live up to it than to have the social norm of the Polytechnique and sink with it.

That's the issue at the heart of Penn State's institutional wickedness and its many deluded defenders. In my book, I also quote the writer George Jonas, back when the Royal Canadian Mounted Police were revealed to be burning down the barns of Quebec separatists: With his characteristic insouciance, the Prime Minister Pierre Trudeau responded that, if people were so bothered by illegal barn burning by the Mounties, perhaps he would make it legal. Jonas pointed out that burning barns isn't wrong because it's illegal, it's illegal because it's wrong. A society that no longer understands that distinction is in deep trouble. To argue that a man witnessing child sex in progress has no responsibility other than to comply with procedures and report it to a colleague further up the chain of command represents a near-suicidal loss of that distinction.

A land of hyperlegalisms is not the same as a land of law. I've written recently about the insane proliferation of signage on America's highways – the "Stop" sign, the "Stop Sign Ahead" sign, the red light, the sign before the red light instructing you that when the light is red you should stop here, accompanied by a smaller sign underneath with an arrow pointing to the precise point where "here" is. One assumes this expensive clutter is there to protect against potential liability issues. It certainly doesn't do anything for American road safety, which is the worst in the developed world. We have three times the automobile fatality rate of the Netherlands, and at 62 in the global rankings we're just ahead of Tajikistan and Papua New Guinea.

But that's the least of it: When people get used to complying with microregulation, it's but a small step to confusing regulatory compliance with the right thing to do – and then arguing that, in the absence of regulatory guidelines, there is no "right thing to do."

In a hyperlegalistic culture, Penn State's collaborators may have the law on their side. But there is no moral liability waiver. You could hardly ask for a more poignant emblem of the hollow braggadocio of the West at twilight than the big, beefy, bulked-up shoulder pads and helmets of Penn State football, and the small stunted figures inside.