A Not-So-Amusing Day at the Amusement Park 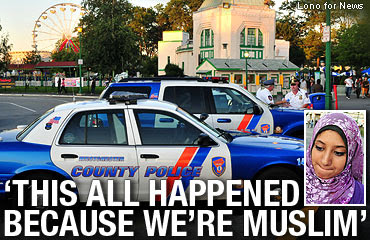 A confrontation between Muslims celebrating the end of Ramadan at the Rye Playland amusement park in Westchester County, New York and local authorities turned ugly yesterday, in a perfect demonstration of the toxic influence agitation outfits like the Council on American-Islamic Relations have had on American discourse. “It’s clear, this all happened because we’re Muslim,” said Dena Meawad, an 18-year-old Muslim woman who was in the midst of the action. She, of course, is the aggrieved victim of the supposedly racist, sexist and, above-all, Islamophobic American society.

Three years ago, Westchester County, which operates Rye Playland, put a policy into effect that forbids people from wearing headgear on certain rides. That rule was imposed because of safety concerns, both that a hat landing on the tracks of certain rides could cause problems and that some coverings – like a head scarf – could represent a strangulation hazard. Peter Tartaglia, deputy commissioner of Westchester County Parks, said the Muslim American Society of New York was informed about the headgear rule on multiple occasions in advance of yesterday’s event, during which about 3,000 members of the society visited the park. “Part of our rules and regulations, which we painstakingly told them over and over again, is that certain rides you cannot wear any sort of headgear,” Tartaglia said.

Some of the young women attending the event either didn’t get the message or chose to ignore it. According to reports, some Muslim women began arguing with police over the rules when they were denied entrance to rides. The confrontation escalated to the point that about 100 police converged on the park to get the melee under control. Fifteen Muslims, including three women, were taken into custody. Two park rangers were injured in the fracas.

The Hamas-linked Council on American-Islamic Relations (CAIR) was naturally quick to take offense over the incident. “In this heightened state of Islamophobia, a woman wearing a hajib is an easy target these days,” said Zead Ramadan, president of CAIR – New York. Except that’s not even remotely the way that America works “these days.”

Far from being “Islamophobic,” modern-day America bends over backwards to avoid even the slightest appearance of impropriety when it comes to interacting with the Muslim community, which is evident in everything from our public school curriculum to our airports. This is a natural outgrowth of the kind of leftist mentality that permeates our society; that America is a racist, sexist and Islamophobic nation for which we must perpetually atone. Unfortunately, some of the “victims” of this paradigm, like CAIR head-hunters, whose relevancy and power is parasitic on the fear of discrimination in the Muslim community, understand that American psychology all too well.

Organizations like CAIR trade in exploiting victimhood, and, as the Rye Playland incident too richly illustrates, that victim mentality filters down into the mainstream Muslim community most readily.
The young women at the amusement park were more than ready to take offense at a perfectly reasonable park policy, because they have been propagandized into believing they are constantly under attack. The outraged young Muslims at Rye Playland were merely acting in accordance with the leftist backstory and CAIR plot-line. They behaved in the way they should be expected to behave, given the nature of the indoctrination on “American-Islamic relations” to which they have been subject.

As has been amply documented, about 70% of all hate crimes are anti-Jewish in nature, while only about 9% of hate crimes are anti-Muslim. Yet this staggering degree of blind bigotry largely goes unnoticed relative to the comparatively minuscule number of anti-Muslim hate crimes. The grossly exaggerated portrayal of Muslim discrimination in the US directly feeds the hysteria that results in ugly incidents like that at Rye Playland and, even worse, stands to excuse them.

But the Rye Playland incident also shows that the prevailing narrative that the Islamic community is a passive, persecuted American enclave doesn’t hold up. It is in fact a politically aggressive community, whose outrages tend to be instigated by Islamophobia manufacturers and the political crowd rather than by acts of bigotry themselves. Rest assured, the more these parties are given credence by society at large, the more Rye Playland incidents we will see.