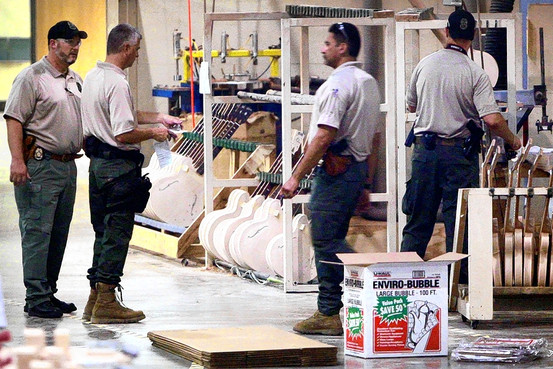 
Gibson Guitar Corp., a big user of ebony and other scarce woods, for years has allied itself with Greenpeace and other environmental groups to show it was serious about preserving forests.

That didn't stop the Nashville-based company, whose guitars are used by such musicians as B.B. King and Angus Young of AC/DC, from running afoul of U.S. authorities over allegedly illegal imports of wood. Though no charges have been filed, Gibson factories have been raided twice, most recently last week, by federal agents who say ebony exported from India to Gibson was "fraudulently" labeled to conceal a contravention of Indian export law.

Henry Juszkiewicz, chief executive officer of the closely held company, said in an interview that a broker probably made a mistake in labeling the goods but that the sale was legal and approved by Indian authorities.

Gibson's predicament, which raises concerns for musical instrument makers and other importers of wood, illustrates the pitfalls of complying with U.S. law while dealing with middlemen in faraway countries whose legal systems can be murky.

The law ensnaring Gibson is the Lacey Act of 1900, originally passed to regulate trade in bird feathers used for hats and amended in 2008 to cover wood and other plant products. It requires companies to make detailed disclosures about wood imports and bars the purchase of goods exported in violation of a foreign country's laws.

Leonard Krause, a consultant in Eugene, Ore., who advises companies on complying with the Lacey Act, is telling clients they should hire lawyers in countries where they obtain products. "How many people know the statutes in India?" Mr. Krause said. "The net effect is that it raises everybody's cost of doing business."

Federal agents first raided Gibson factories in November 2009 and were back again Aug. 24, seizing guitars, wood and electronic records. Gene Nix, a wood product engineer at Gibson, was questioned by agents after the first raid and told he could face five years in jail.

"Can you imagine a federal agent saying, 'You're going to jail for five years' and what you do is sort wood in the factory?" said Mr. Juszkiewicz, recounting the incident. "I think that's way over the top." Gibson employees, he said, are being "treated like drug criminals."

Mr. Nix hasn't been accused of any wrongdoing. He couldn't be reached for comment.

A Justice Department spokesman declined comment. While Justice Department officials pursue what they say is a possible criminal case against Gibson, they and the company are battling in federal district court in Nashville over whether materials seized in the 2009 raid should be returned to Gibson. That civil fight provides indications of the case the government is trying to make against Gibson.

Mr. Nix went to Madagascar in June 2008 on a trip organized by environmental groups to talk to local officials about selling responsibly harvested wood to makers of musical instruments. Afterward, in emails later seized by the government, he referred to "widespread corruption and theft of valuable woods" and the possibility of buying ebony and rosewood from Madagascar on "the grey market."

Gibson has denied the allegation and said Mr. Nix's emails were quoted out of context.

The government has focused on a March 2009 shipment of ebony from Madagascar intended for guitar fingerboards. Madagascar law bars the export of certain unfinished wood products, according to both Gibson and the government. Gibson says the ebony had been cut into pieces and that local officials approved the export as a legal sale of finished goods.

U.S. officials described the wood as "sawn timber" and said Madagascar officials were "defrauded" by a local exporter about the nature of the product.

Gibson says the government is trying to "second guess" the Madagascar government. "The U.S. government's startling position smacks of something from an Orwell novel," Gibson said in a July 15 court filing in federal district court in Nashville.

After the 2009 raid, Gibson stopped buying wood from Madagascar. Gibson continued to use suppliers in India for ebony and rosewood.

As for last week's raid, the government said it had evidence that Indian ebony was "fraudulently" labeled in an attempt to evade an Indian ban on exports of unfinished wood.

"It is very possible that a broker made the mistake in filling out a form," Mr. Juszkiewicz said. Gibson says the ebony was partially finished for use as fingerboards and that Indian officials have endorsed such exports as legal. A spokesman for India's commerce ministry had no immediate comment.

After the 2009 raid, Mr. Juszkiewicz resigned from the board of the Rainforest Alliance, which seeks to preserve tropical forests. He said he didn't want to tar the nonprofit with bad publicity. A Rainforest Alliance spokeswoman said he wasn't pressured to step down, and the group continues to praise Gibson's efforts to promote responsible harvesting of wood.

Scott Paul, a Greenpeace official in New York responsible for forestry issues, said Gibson for years has done "great work" to promote better forestry practices. The question, he said, is whether Gibson did everything possible to avoid buying wood from dubious sources. "We have no idea," he said.

—Amol Sharma contributed to this article.

Write to James R. Hagerty at bob.hagerty@wsj.com and Kris Maher at kris.maher@wsj.com
Posted by jtf at 9:22 AM