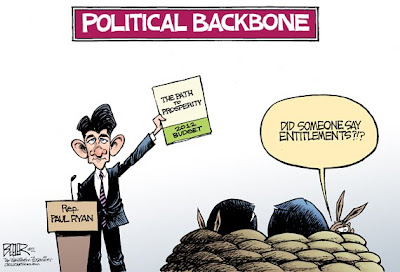 ‘My worst experience was the financial crisis of September 2008,” responded House Budget Committee chairman Paul Ryan yesterday to a reporter’s question about Democrats’ attacks on the budget he unveiled earlier in the day.

“What if the president and your representative saw it coming and could have prevented it from happening?” Ryan said. “What would you think of them if they didn’t?” A hush came over the audience at the American Enterprise Institute (where I am a resident fellow).

It was Ryan’s way of saying that the financial meltdown arrived largely without warning, while the impending fiscal crunch is like a runaway freight train.

“This is the most predictable crisis in the history of our country,” he went on. “We are on our path to a debt crisis” like those we’ve seen recently in Europe, with the national debt as a percentage of gross domestic product rising, under Barack Obama’s budget, past the 90 percent danger point on its way to 800 percent.

At some point in between, as Harvard economist Kenneth Rogoff explains in the Financial Times, interest rates spike upward and the government is forced to make draconian cuts.

Those Social Security checks? They can be scratched at any time, as the Supreme Court held in Flemming v. Nestor in 1960. Congress can do that just as quickly as it voted $700 billion to bail out the banks in fall 2008.

Ryan’s budget attempts to prevent that by restructuring taxes and spending programs so that the national debt as a percentage of GDP will start sliding down.

Tax rates would be lowered and the tax base broadened, much as Congress did in 1986. Federal spending would revert to 2008 levels and be frozen for five years.

Corporate-welfare programs, including green energy, would be ended. Defense spending would be at the levels recommended by Defense Secretary Robert Gates.

Medicaid would be converted into block grants to the states, which would give them new incentives to hold down costs.

Medicare would be converted, for those now under 55, to a program like federal employees’ health-benefit plans and the Medicare prescription-drug program. Seniors would have a choice of plans and would receive “premium support,” federal supplements varying in size depending on income and health.

As Ryan says, this resembles welfare reform in the 1990s — one of the great public-policy successes of recent times.

Ryan’s budget is a brave attempt to reverse the Obama Democrats’ vast increase in the size and scope of government. The premise of their policies was that people can’t make rational choices to take care of themselves and are better off depending on centralized experts to limit those choices.

Ryan’s budget is based on the idea that people are capable of making decisions for themselves. And that the cumulative result of all those decisions, made by millions of people, will be greater productivity, creativity, and protection than can ever be achieved by a few experts through centralized command and control.

This is not an approach recommended by campaign consultants. Their conventional wisdom says that you never, ever recommend any changes in programs like Medicare.

Such advice has been heeded by the former community organizer now in the White House. “Hope and change” was a nice theme for an out-party candidate in 2008. But the status quo and fear-mongering seems to be the approach for the in-party candidate who this week announced the beginning of his 2012 campaign.

In the short term, Ryan’s budget resolution will likely be adopted in the Republican-controlled House and not even considered in the Democratic-majority Senate. Most of it will probably not become law this year.

But it’s also likely to shape the economic platform for the Republican presidential nominee in 2012. None of the current potential candidates has come up with anything so comprehensive. Some have already stepped up and praised Ryan’s plan.

But the political risk may be greater for the other side. “To be in a secure place for re-election,” writes Mark Penn, a key strategist for Bill Clinton in 1996, “President Obama has some tasks ahead of him that will give him the edge when (the Republican) field is narrowed.”

The first task, Penn writes, is to “take over leadership of the budget fight to turn it into a win for him and fiscal sanity.”

It seems that Penn agrees with Ryan that American voters realize that we are headed to fiscal Armageddon and that major changes must be made while we have time. What will they think of a president who disagrees?