Butler Bulldogs have a lot to be proud of 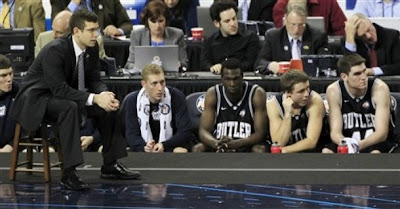 HOUSTON -- It was such a beautiful dream, and it lasted and lasted and seemed as if it might never end. One Butler Bulldogs victory after another, another buzzer-beater, another last-second slice of hoops heroism, another amazing comeback. It was a dream, for a second straight season, that had us all in its thrall, locally, nationally, even globally.

A beautiful dream . . . that turned, for one hideous evening, into a nightmare.

They climbed basketball's Everest once again, which is remarkable in and of itself, only to stop a few breathless steps short of the summit. This doesn't often happen to basketball's pedigreed bluebloods, but for it to happen to Butler, the small school with the small budget and the humble facilities, was amazing, inspiring and redemptive.

"I feel fortunate to have been a part of this class and this whole team," Butler senior Matt Howard said later, blinking back the tears. "It's really hard to put that into words right now. We wanted a little bit more, but maybe at some point (we) can look back and be proud of what this group has accomplished."

He doesn't have to look back and be proud.

He can be proud now.

"I don't love them any less because they lost," coach Brad Stevens said. "What they've done is remarkable."

In the end, it was a shame, a crying shame.

A crying shame for the program, which had done more with less than anybody in the country, representing the school and the state of Indiana with consummate grace and class.

A shame for Howard, who should have his jersey retired in the Hinkle Fieldhouse rafters after a model career in which he represented the best of The Butler Way. He is the ultimate scholar-athlete.

"I told him after the game," Stevens said, softly, "I don't have enough time now to tell him all the things he's meant to Butler."

And really, a crying shame for college basketball. What a marvelous moment it would have been, Butler's players and coaches standing there hoisting the trophy after a scandal-plagued year in college sports.

It's a simple game, really. You've got to make shots. Twelve-of-64 won't beat Youngstown State. It certainly won't beat UConn on the game's biggest stage. The Bulldogs' 41 points were the fewest scored in a national championship game since Oklahoma A&M had 36 in 1949.

Shelvin Mack never got loose to do damage. Howard had hands and bodies in his face all night. Andrew Smith had a game to forget (and it's fair to wonder where Stevens was hiding Khyle Marshall). UConn guarded the paint like it was fine china, dominating down low.

It had a lousy personality.

By midway through the second half, even Butler's brilliant coach was out of answers. He tried a zone -- and zones are not a part of the Butler DNA. He tried Chrishawn Hopkins. He tried every trick he had (short of Marshall).

"We kept telling each other, the shots are going to go in, it's going to be fine," Howard said. "That's the mind-set you have to have."

But, you know, we're not here to talk about the intricacies of the game, to break it all down. Really, there's not much to break down. They missed shots. End of story. And UConn had a lot to do with that.

In the end, this most recent Butler run was -- again -- remarkable and inspiring and downright fun. From that Horizon League Tournament championship victory in Milwaukee, to the last-second victory over Old Dominion to the crazy final seconds with Pittsburgh to the manhandling of Wisconsin to the comebacks against Florida and on into the Final Four.

In a state whose loyalties are often bisected into Indiana University and Purdue, Butler is the one thing everybody can agree upon: It's an absolute model of what a basketball program ought to be. The way the Bulldogs play, the way the coaches and players handle themselves, the humility and the grace with which they handled the good times and the bad, it all strikes the perfect chord.

One rough night doesn't diminish what they've accomplished these past two years.

Not at all. Not in the least.

They've done something that mid-majors are simply not supposed to do. They've come from a mid-major conference, worked with mid-major funds, and built a powerhouse that can compete with and beat the sport's pedigreed bluebloods.

And they fell way short -- painfully short -- against UConn.

History will not record that Butler was a national champion, but we will all remember this as a legendary group who made two noble assaults on the summit of college basketball.

After the game, Stevens was asked about the legacy of this group of players, who will always be remembered locally and in college basketball lore.

"That they were just good guys," Stevens said with a smile and a sigh. "Just good students, people at Butler really like them, not because they're basketball players but because they treat people right and they're engaging and smart and they're all going to be very successful. . . . It's what it's all about."

It would have made for a sweeter ending -- Butler: national champions -- but the best stories don't always get written.

Bob Kravitz is a columnist for The Indianapolis Star. Contact him at (317) 444-6643 or via email at bob.kravitz@indystar.com. You can also follow Bob on Twitter at @bkravitz.
Posted by jtf at 9:52 AM