On Egypt the Left are all neo-cons now 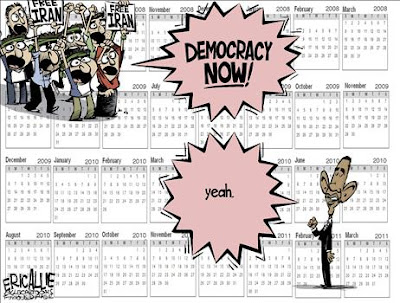 The future of Egypt following the departure of president Hosni Mubarak remains opaque.

No one can currently predict whether it will end up as a democracy with free elections, a military dictatorship, or an Islamic theocratic tyranny.

But the Western Left has known one thing for certain from the very start of the protests: that the tyrannical dictator Mubarak had to go, that the protesters in Tahrir Square were all on the side of freedom and that the convulsions presaged a joyous new dawn of democracy and human rights.

This was despite the serious risk of an Islamist takeover in Egypt, with the consequent extinction of human rights for the Egyptians worse than anything under Mubarak's clearly repressive regime. And it was also despite the fact that opinion polls have suggested that many, if not most Egyptians harbour Islamist, anti-Western and ferociously anti-Jewish ideas.

Nevertheless, Western progressives were shouting for regime change. At which point it began to seem that, like Alice, one had somehow been transported through the looking-glass.

For during the past seven years, Western liberals have fulminated without remission that George W. Bush, Donald Rumsfeld and Tony Blair were criminally out to lunch to pretend that democracy could ever come to Iraq through ousting a dictator.

The neo-con article of faith, that the Arab or Islamic world, could or should embrace democracy and human rights, was held up as an example of cultural imperialism, racist bigotry or insanity, or all three.

But suddenly everyone in the bien-pensant world has apparently become a neo-con.

The US, they now fulminated, had been criminally obtuse in propping up the dictator Mubarak rather than helping turn Egypt into a democracy.

It would doubtless be uncharitable to add that, throughout this supposedly diabolical Mubarak presidency those same liberals saw no problem taking vacations rubber-necking round the Pyramids or steaming up the Nile. No boycott, divestment or sanctions movement there; such censure is never applied by the Left to any of the tyrannies of the Middle East, of course, only against the sole democracy in the region: Israel.

Nor do the double standards stop there. When the people of Lebanon made their pitch for democracy against the crushing oppression of Hezbollah, Western bien-pensants were totally indifferent. When the people of Iran made their pitch for democracy against the savage cruelties of the Islamic regime, the bien-pensants were totally indifferent. But when the Egyptians took to the streets, the bien-pensants all but wetted themselves with excitement.

What was the difference? If the Lebanese and Iranians had succeeded, the West would have been strengthened. But the risk still remains that the canny Muslim Brotherhood will bide their time before pouncing and coming to power in Egypt, which would of course furnish another major threat for the free world.

And this is the most frightening thing of all in this back-to-front universe: the way in which the West has sanitised the Muslim Brothers and even, in the case of the Obama administration, actually tried to push them into power.

When it wasn't flip-flopping over whether Mubarak should stay or go, the White House first said it wouldn't mind if the Muslim Brothers became part of the Egyptian government.

Then it urged the inclusion of "important non-secular actors" - code for the Muslim Brothers - in a "more democratic" Egypt. And then it was revealed that its proposal for the immediate transfer of power called for the transitional government to include the brotherhood.

What madness was this? The Muslim Brothers' goal is to Islamise the world. They are religious fascists. While certainly there are millions of Muslims around the world who do want to live under democracy, the Brothers are totally against any secular rule at all and stand for an extinction of human rights. They are fanatical Jew-haters. In the 1930s they were effectively created as a political force by the Nazi Party, with which they formulated a final solution for Palestine by ridding it of its Jews, an agenda continued today by their offshoot, Hamas.

Today, they are no less the mortal enemies of the free world. Their leaders have declared war on America, gloating that the US is "experiencing the beginning of its end and is heading towards its demise", and that "resistance is the only solution".

They support al-Qa'ida terrorism "against the Americans and the Zionists". They declared that after Mubarak they would dissolve the peace treaty with Israel.

They support Hezbollah, make overtures to Iran, and openly employ a strategy of simulating moderation to gain power though democratic means in order to destroy democracy.

If Egypt is eventually taken over by the brotherhood, Jordan will be next, and both will turn into Iran/Gaza in a matter of a few years. Oh, and the Brothers are also busy Islamising Britain and America. Yet on both sides of the pond, significant elements of the political and defence establishment have decided that the Muslim Brothers are basically peace-loving, sensible, pragmatic chaps who are useful allies against the men of violence.

It is hard to escape the conclusion that the double standards of the Left result from its deep hatred of the Western society whose basic values they wish to overturn. Whether during the French Revolution or the Stalinist purges, the Left has repeatedly sided with the extinction of human freedom and refused to accept the monstrous evidence of its own credulousness.

Among political and defence elites, moreover, the stranglehold of multicultural victim culture, the influence of revisionist "scholars" such as John Esposito or Karen Armstrong who sanitise Islam, and the deep desire to take the path of least resistance - plus the reflexive view that the real threat to the world is not the Islamic jihad but the state of Israel - means that the establishment meets the Left on the same side of the looking-glass.

Has there ever been a civilisation more bent on collective suicide than the contemporary West?

- Melanie Phillips is the author of The World Turned Upside Down: The Global Battle over God, Truth and Power, published by Encounter.
Posted by jtf at 2:59 PM