Democracy is a Relative Term 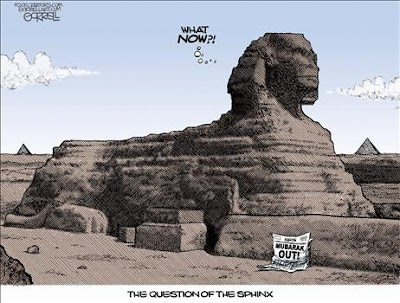 Everyone is excited about the toppling of Hosni Mubarak in Egypt. “This is a moment of huge opportunity,” enthused one noted analyst. Another agreed: “We will soon see a new Middle East materializing.” The two analysts in question are Tony Blair and Mahmoud Ahmadinejad — and that sums up the reigning confusion about what exactly has happened in Egypt, and what is likely to happen next.

Maybe. Ahmadinejad, however, is envisioning a wholly different scenario. He predicted that “we will soon see a new Middle East materializing without America and the Zionist regime, and there will be no room for world arrogance [that is, the West] in it.”

So who’s right? Will Egypt become a Western-style pluralistic democracy, with equal rights for women, as well as for its sizable and embattled Christian minority? Or was Muslim Brotherhood spokesman Ahmad Mersi correct when he declared that the Egyptian people want the rule of Islamic law?

Over the course of Egypt’s revolution, the mainstream media has been intent on downplaying the popularity of the Muslim Brotherhood. Egyptian presidential contender Mohamed ElBaradei also minimized both the Brotherhood’s commitment to the draconian elements of Islamic law and its popularity, saying, “This is total bogus that the Muslim Brotherhood are religiously conservative. They are no way extremists. They are no way using violence. They are not a majority of the Egyptian people. They will not be more than maybe 20 percent of the Egyptian people.”

ElBaradei’s claim that the Brotherhood is not “religiously conservative,” although echoed by Obama’s clueless intelligence chief, James Clapper, is ridiculous on its face, and contradicted by numerous statements of past and present Brotherhood leaders, including Mersi. Nonetheless, the Brotherhood has an 80-year history in Egypt, and in the course of 80 years, one may make a lot of enemies — so ElBaradei’s lowballing of the Brotherhood’s likely post-Mubarak support within the country may not be very far off the mark.

Nonetheless, it may be able to steer post-Mubarak events in Egypt its way precisely because it is the foremost exponent of political Islam in Egypt. A Pew Research Center survey conducted in Egypt in spring 2010 found that no fewer than 85% of Egyptians thought that Islam was a positive influence in politics. Fifty-nine per cent said they identified with “Islamic fundamentalists” in their struggle against “groups who want to modernize the country,” which had the support of only 27% of Egyptians. Only 20% were “very concerned” about “Islamic extremism” within Egypt.

In light of all that, it may seem puzzling that 59% of Egyptians affirmed that “democracy is preferable to any other kind of government.” But while Westerners may assume that democracy refers in all cases to the implementation of Jeffersonian principles of limited government, tolerance, the free press, and popular accountability, all too often nowadays it has been reduced to mere head-counting — and in Egypt as well as elsewhere in the Middle East, the advocates of political Islam are the ones who have the heads.

That’s why Mohammad-Javad Larijani, secretary-general of the ironically named Iranian High Council for Human Rights, was able to express unqualified support for the Egyptian uprising: “In my opinion, the Islamic Republic of Iran should see these events without exception in a positive light.” He characterized the already-toppled Ben Ali government in Tunisia as “anti-Islamic,” and predicted that soon Tunisians would have a “people’s government.” And in Egypt, Larijani said, “Muslims are more active in political agitation and, God willing, they will establish the regime that they want.”

The regime they want, by all indications, is an Islamic one. A Kerensky-style interregnum featuring an uneasy democratic coalition enjoying little popular support may follow Mubarak, or the military may clamp down entirely on the protests. But if the Egyptian people are allowed to express their will, almost certainly an Islamic regime will follow — with consequences that should give even Tony Blair reason to regret his enthusiasm.


- Mr. Spencer is director of Jihad Watch and author of The Politically Incorrect Guide to Islam (and the Crusades), The Truth About Muhammad, Stealth Jihad and The Complete Infidel's Guide to the Koran (all from Regnery-a HUMAN EVENTS sister company).
Posted by jtf at 2:47 PM