The Chevy Volt is a vanity car for the well-off, and the government is subsidizing it.

Let us compare the Volkswagen and the “Voltswagen.”

The original Volkswagen was intended as the “people’s car” (that’s what Volkswagen means). The idea of a cheap, safe, reliable car for the working man was popular before Adolf Hitler embraced it, but as a self-proclaimed man of the people, he made the idea his own. Whereas industrialists and aristocrats didn’t think the common man needed a car (“The people’s car is a bus” was their refrain), Hitler sided with one of his heroes, Henry Ford, arguing that everyone deserved his own ride. He ordered the German Labor Front, the union arm of the Nazi party, to start building a people’s car. When it looked like the car might be too expensive, the Labor Front created a savings program that promised a car for even the poorest workers.

At the 1934 Berlin Motor Show, Hitler proclaimed: “It is a bitter thought that millions of good and industrious people are excluded from the use of a means of transport that, especially on Sundays and holidays, could become for them a source of unknown joy.” 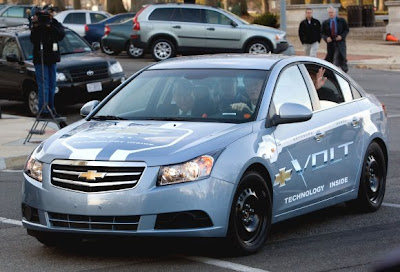 And then there’s the electric-gas hybrid Chevy Volt, a.k.a. the “Voltswagen.” At $41,000, about as much as the average American makes in a year, this is no people’s car. GM, owned by the government and the labor unions, is pitching it to affluent hipsters who don’t need a lot of space for a family. Deloitte Consulting says that the demand for such cars is from “young, very high income individuals” from households that make more than $200,000 a year, which is why the Volt will be rolled out in upscale, trendy urban markets. (Meanwhile the Chevy Cruze, the gas-only version of the Volt, has more room inside and is a mere $17,000.)

Because the Volt’s sticker price might be too high for even that crowd, the government is offering a federal subsidy of up to $7,500 (Californians have a state subsidy, too), which means that working-class people will be helping to pay for playthings for upper-income people.

“Like the EV1 that GM tried to peddle in the California market,” Kenneth Green, an environmental scientist at the American Enterprise Institute, says, “the Volt is a vanity car for the well-off that will be subsidized by less well-off taxpayers at all stages, from R&D to sales and to the construction of charging stations.”

Indeed, the Volt’s price is $41,000, but the cost is much higher. “Government Motors” is already selling the car at a loss. According to the blogger Doctor Zero, if you apply the subsidies that have gone directly into the car to just the first 10,000 vehicles, the cost is more like $81,000 per car.

Of course, electric-car boosters say this sort of thing is necessary to get the industry up and running. (Green responds: “Supporters claim that electric cars need subsidies because they’re still in their infancy. Electric cars have been around for over 100 years. That’s some infancy.”)

But would it be a good thing if we all switched to electric cars? The point is to reduce CO2 emissions, right? But in some regions, we get our electricity from CO2-spewing coal. The more electricity pulled from the grid, the more coal is burned, essentially replacing dirty oil with dirtier coal (which is why some coal backers see much promise in electric cars). Studies confirm that China — which is allegedly “beating us” in the race to a green economy — would produce vastly more greenhouse emissions if it switched to electric vehicles.

The expected response to that is that we need stuff like CO2-free windmills to generate electricity. Don’t get me started on the Volkspropeller.

Regardless, no matter how you crunch the numbers or the science, there’s no disputing that this is a political car, designed to meet the demands not of an economic market but of an ideological one, directed by the collusion of big business and big government. In this sense, the Volkswagen and the Voltswagen have a lot in common.

If the government weren’t taking taxpayer money and spending it on toys for upscale urban liberals (Obama’s strongest base of support outside of black voters and labor unions), there’d be no reason to care about the Volt. If rich people want to be “early adopters” and buy expensive gadgets that help them preen the plumage of their political sanctimony, that’s great. It’s not so great when the government gets involved in wealth redistribution, and it’s outrageous when it involves redistributing wealth upwards.

— Jonah Goldberg is editor-at-large of National Review Online and a visiting fellow at the American Enterprise Institute. © 2010 Tribune Media Services, Inc.
Posted by jtf at 6:38 AM