It can’t be done without confronting mainstream Islam and its sharia agenda. 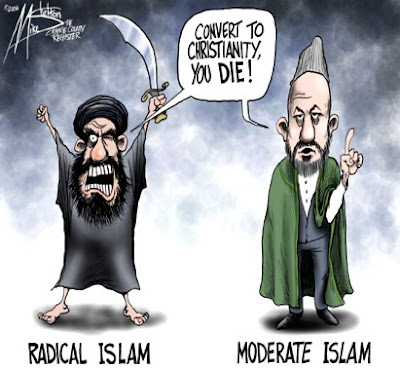 ‘Secularism can never enjoy a general acceptance in an Islamic society.” The writer was not one of those sulfurous Islamophobes decried by CAIR and the professional Left. Quite the opposite: It was Sheikh Yusuf al-Qaradawi, the Muslim Brotherhood’s spiritual guide and a favorite of the Saudi royal family. He made this assertion in his book, How the Imported Solutions Disastrously Affected Our Ummah, an excerpt of which was published by the Saudi Gazette just a couple of months ago.[1]

This was Qaradawi the “progressive” Muslim intellectual, much loved by Georgetown University’s burgeoning Islamic-studies programs. Like Harvard, Georgetown has been purchased into submission by tens of millions of Saudi petrodollars.[2] In its resulting ardor to put Americans at ease about Islam, the university somehow manages to look beyond Qaradawi’s fatwas calling for the killing of American troops in Iraq and for suicide bombings in Israel. Qaradawi, they tell us, is a “moderate.” In fact, as Robert Spencer quips [3], if you were to say Islam and secularism cannot co-exist, John Esposito, Georgetown’s apologist-in-chief, would call you an Islamophobe; but when Qaradawi says it, no problem — according to Esposito, he’s a “reformist.”[4]

And he’s not just any reformist. Another Qaradawi fan, Feisal Rauf, the similarly “moderate” imam behind the Ground Zero mosque project, tells us Qaradawi is also “the most well-known legal authority in the whole Muslim world today.”

Rauf is undoubtedly right about that. So it is worth letting it sink in that this most influential of Islam’s voices, this promoter of the Islamic enclaves the Brotherhood is forging throughout the West, is convinced that Islamic societies can never accept secularism. After all, secularism is nothing less than the framework by which the West defends religious freedom but denies legal and political authority to religious creeds.

It is also worth understanding why Qaradawi says Islam and secularism cannot co-exist. The excerpt from his book continues:

As Islam is a comprehensive system of worship (Ibadah) and legislation (Shari’ah), the acceptance of secularism means abandonment of Shari’ah, a denial of the divine guidance and a rejection of Allah’s injunctions. It is indeed a false claim that Shari’ah is not proper to the requirements of the present age. The acceptance of a legislation formulated by humans means a preference of the humans’ limited knowledge and experiences to the divine guidance: “Say! Do you know better than Allah?” (Qur’an, 2:140) For this reason, the call for secularism among Muslims is atheism and a rejection of Islam. Its acceptance as a basis for rule in place of Shari’ah is downright apostasy.

Apostasy is an explosive accusation. On another occasion, Sheikh Qaradawi explained that “Muslim jurists are unanimous that apostates must be punished.” He further acknowledged that the consensus view of these jurists, including the principal schools of both Sunni and Shiite jurisprudence, is “that apostates must be executed.”

Qaradawi’s own view is more nuanced, as he explained to the Egyptian press in 2005.[5] This, I suppose, is where his vaunted reformist streak comes in. For private apostasy, in which a Muslim makes a secret, personal decision to renounce tenets of Islam and quietly goes his separate way without causing a stir, the sheikh believes ostracism by the Islamic community is a sufficient penalty, with the understanding that Allah will condemn the apostate to eternal damnation at the time of his choosing. For public apostasy, however, Qaradawi stands with the overwhelming weight of Islamic authority: “The punishment . . . is execution.”

The sad fact, the fact no one wants to deal with but which the Ground Zero mosque debate has forced to the fore, is that Qaradawi is a moderate. So is Feisal Rauf, who endorses the Qaradawi position — the mainstream Islamic position — that sharia is a nonnegotiable requirement. Rauf wins the coveted “moderate” designation because he strains, at least when speaking for Western consumption, to paper over the incompatibility between sharia societies and Western societies.

Qaradawi and Rauf are “moderates” because we’ve abandoned reason. Our opinion elites are happy to paper over the gulf between “reformist” Islam and the “reformist” approval of mass-murder attacks. That’s why it matters not a whit to them that Imam Rauf refuses to renounce Hamas: If you’re going to give a pass to Qaradawi, the guy who actively promotes Hamas terrorists, how can you complain about a guy who merely refuses to condemn the terrorists?

When we are rational, we have confidence in our own frame of reference. We judge what is moderate based on a detached, commonsense understanding of what “moderate” means. We’re not rigging the outcome; we just want to know where we stand.

If we were in that objective frame of mind, we would easily see that a freedom culture requires separation of the spiritual from the secular. We would also see that sharia — with dictates that contradict liberty and equality while sanctioning cruel punishments and holy war — is not moderate. Consequently, no one who advocates sharia can be a moderate, no matter how well-meaning he may be, no matter how heartfelt may be his conviction that this is God’s will, and no matter how much higher on the food chain he may be than Osama bin Laden.

Instead, abandoning reason, we have deep-sixed our own frame of reference and substituted mainstream Islam’s. If that backward compass is to be our guide, then sure, Qaradawi and Rauf are moderates. But know this: When you capitulate to the authority and influence of Qaradawi and Rauf, you kill meaningful Islamic reform.

There is no moderate Islam in the mainstream of Muslim life, not in the doctrinal sense. There are millions of moderate Muslims who crave reform. Yet the fact that they seek real reform, rather than what Georgetown is content to call reform, means they are trying to invent something that does not currently exist.

Real reform can also be found in some Muslim sects. The Ahmadi, for example, hold some unorthodox views and reject violent jihad. Witness what happens: They are brutally persecuted by Muslims in Pakistan, as well as in Indonesia and other purported hubs of moderation.

Meanwhile, individual Muslim reformers are branded apostates, meaning not only that they are discredited, but that their lives are threatened as well. The signal to other Muslims is clear: Follow the reformers and experience the same fury. As Qaradawi put it in the 2005 interview, public apostates are “the gravest danger” to Islamic society; therefore, Muslims must snuff them out, lest their reforms “spread like wildfire in a field of thorns.”

Today, “moderate Islam” is an illusion. There is hardly a spark, much less a wildfire. Making moderation real will take more than wishing upon a star. It calls for a gut check, a willingness to face down not just al-Qaeda but the Qaradawis and their sharia campaign. It means saying: Not here.