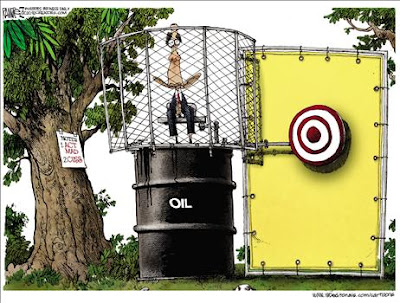 Tuesday night, following a tour of the Gulf Coast area, the President of the United States addressed the nation regarding the state of the BP oil spill. In his speech from the Oval Office, President Obama spoke regarding our nation's dependence upon oil and how we need to break that dependence.

During his speech, the President made a statement that was blatantly false. The President noted, "We consume more than 20% of the world's oil, but have less than 2% of the world's oil reserve. And that's part of the reason oil companies are drilling a mile beneath the surface of the ocean -- because we're running out of places to drill on land and in shallow water."

We are not running out of places to drill on land and in shallow water. In fact, it is due to the President's party of extreme environmentalists that BP had to drill some 40 miles from the coastline in deep waters to extract oil. Imagine if this oil leak had happened in the shallow waters off of the East Coast or even, dare we say it, in the pristine ANWR region. How much easier it would have been to cap the leak and clean up the oil.

Consider our nation's vast oil reserve resources that are currently unavailable for use due to government ownership of the land or outright bans on drilling in certain areas.

According to a June 2008 article in Kiplinger Magazine, the United States has enough oil reserves to power the nation for upwards of three centuries. That's three-hundred years, Mr. President. We are not running out of oil reserves, it's just that those oil reserves have been declared off limits due to decades of environmental lobbying of our politicians, especially those on the Left. This lobbying has driven the likes of BP and others out deep into the Gulf of Mexico to extract the nation's needed oil.

Note the following statement from the article:

"...untapped reserves are estimated at about 2.3 trillion barrels, nearly three times more than the reserves held by Organization of Petroleum Exporting Counties (OPEC) and sufficient to meet 300 years of demand-at today's levels-for auto, aircraft, heating and industrial fuel, without importing a single barrel of oil."

Think about that. The nations that currently hold us hostage by their massive oil production actually have far less reserves than our own nation. Put another way, some of the very nations in which we are dependent upon oil are also the same nations that help to sponsor worldwide terrorism. Were we to extract our own oil, it would make our nation and the world a safer place. But, isn't a spotted owl more important than the safety of the world?

Among the areas the article mentions are the oil shale located underneath land in Colorado, Wyoming, and in Utah. These lands are federally protected, but they alone could provide about 200 years worth of oil for the nation. Others mentioned include oil reserves located under Montana and some reserves located on protected lands in Texas, California, Utah, and Kentucky.

In fact, our own government has acknowledged the vast oil resources available to us. In an April 2008 study conducted by the United States Geological Survey, the group began its press release with the following, "North Dakota and Montana have an estimated 3.0 to 4.3 billion barrels of undiscovered, technically recoverable oil in an area known as the Bakken Formation."

The report acknowledges that the available oil reserves could be much larger, but the 3.0 to 4.3 billion figure represents oil recoverable right now with today's technology. In fact, there may more than 100 billion barrels eventually recoverable with continued developments in the technology necessary to extract the oil.

Then there is the most famous government-blocked area of oil reserves, the Arctic National Wildlife Refuges (ANWR). With 10 billion barrels available, ANWR is the most accessible of the major untapped oil reserve locations in the United States and claims are that this oil could be extracted in a way that would have minimal negative environmental impact.

Yet, with all of these resources, here we sit, importing oil at a feverish pace and a significant portion of it from our enemies and those who support terrorist organizations around the world. And, here we sit watching oil float towards our shores through unnecessary deep-water drilling when we could be drilling on dry land.

Yes, the President is correct when he calls for the need to use more alternative energy sources. Some of these may, in the long-term, actually be more efficient than the use of oil and be more readily accessible. However, until then we would be wise to tap our God-given resources in the safest of areas first before we go drilling more than a mile beneath the ocean for the same fuel that is available on dry land.

Therefore, if we're tossing all the blame towards BP for this catastrophic oil spill then we're ignoring other perpetrators. The reason BP and other oil companies are drilling 40+ miles off the shoreline and more than a mile deep is because of the stranglehold that environmentalists have held on politicians and their resulting energy policies for decades.

Let's use some common sense. Drill first on land, then in water. It's really not that difficult.


Chad Stafko is a writer and political consultant living in the Midwest. He can be reached at stafko@msn.com
Posted by jtf at 3:10 PM