Despite being a bit of an old showbiz queen, I’m not much for the huggy-kissy photo wall of me sharing a joke with various luvvies. I make an exception on the bureau behind my desk for a shot of yours truly and a beautiful woman, Somali by birth, Dutch by citizenship, at a beachfront bar in Malibu at sunset. I like the picture because, while I look rather bleary with a few too many chins, my companion is bright-eyed with a huge smile on her face and having a grand old time—grand, that is, because of its very normality: a crappy bar, drinks with cocktail umbrellas, a roomful of blithely ignorant California hedonists who’ll all be going back home at the end of the evening to Dancing With the Stars or Conan O’Brien or some other amusement.

Ayaan Hirsi Ali can’t lead that life. She lives under armed guard and was forced to abandon the Netherlands because quite a lot of people want to kill her. And not in the desultory behead-the-enemies-of-Islam you-will-die-infidel pro forma death-threats-R-us way that many of us have perforce gotten used to in recent years: her great friend and professional collaborator was murdered in the streets of Amsterdam by a man who shot him eight times, attempted to decapitate him, and then drove into his chest two knives, pinning to what was left of him a five-page note pledging to do the same to her.

What would you do in those circumstances? Ayaan and I had repaired to that third-rate bar after a day-long conference on Islam, jihad, free speech and whatnot. That’s usually where I run into her, whether in Malibu or at the Carlton Club in London or at a less illustrious venue. Would you be doing that with a price on your head? Or would you duck out of sight, lie low, change your name, move to New Zealand, and hope one day to get your life back? After the threats against the Comedy Central show South Park the other week, Ms. Hirsi Ali turned up on CNN to say that the best defence against Islamic intimidation is for us all to stand together and thereby “share the risk.” But, around the world, every single translator of her books has insisted on total anonymity. When push comes to shove, very few are willing to share the risk. The British historian Andrew Roberts calls her “the bravest woman I know.” I would say she is not only the bravest but also, given her circumstances, the most optimistic. I have an unbounded admiration for her personally, but a not insignificant difference philosophically, of which more momentarily.

Ayaan Hirsi Ali’s great cause is women’s liberation. Unfortunately for her, the women she wants to liberate are Muslim, so she gets minimal support and indeed a ton of hostility from Western feminists who have reconciled themselves, consciously or otherwise, to the two-tier sisterhood: when it comes to clitoridectomies, forced marriages, honour killings, etc., multiculturalism trumps feminism. Liberal men are, if anything, even more opposed. She long ago got used to the hectoring TV interviewer, from Avi Lewis on the CBC a while back to Tavis Smiley on PBS just the other day, insisting that say what you like about Islam but everyone knows that Christians are just as backward and violent, if not more so. The media left spends endless hours and most of its interminable awards ceremonies congratulating itself on its courage, on “speaking truth to power,” the bravery of dissent and all the rest, but faced with a pro-gay secular black feminist who actually lives it they frost up in nothing flat.

“She has managed to outrage more people—in some cases to the point that they want to assassinate her—in more languages in more countries on more continents than almost any writer in the world today. Now Hirsi Ali is working on antagonizing even more people in yet another memoir.”

That’s his opening pitch: if there are those who wish to kill her, it’s her fault because she’s a provocateuse who’s found a lucrative shtick in “working on antagonizing” people. The Times headlines Kristof’s review “The Gadfly,” as if she’s a less raddled and corpulent Gore Vidal. In fact, she wrote a screenplay for a film; Muslim belligerents threatened to kill her and her director; they made good on one half of that threat. This isn’t shtick.

But Kristof decides to up the condescension. Of the author’s estrangement from her Somali relatives, he writes: “I couldn’t help thinking that perhaps Hirsi Ali’s family is dysfunctional simply because its members never learned to bite their tongues and just say to one another: ‘I love you.’ ” 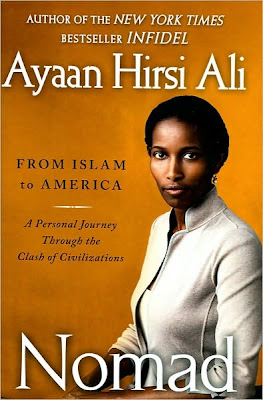 But maybe not so much in Somalia. This isn’t a family where they bite their tongues but where they puncture their clitorises. At the age of five, Ayaan was forced to undergo “FGM” (female genital mutilation), or, in the new non-judgmental PC euphemism, “cutting.” When she had her first period, her mother beat her. When she was 22, her father arranged for her to marry a cousin in Canada. While in Germany awaiting the visa for her wedded bliss in Her Majesty’s multicultural utopia, she decided to skip out, and fled to the Netherlands.

All she wanted was a chance to do what Nicholas Kristof takes for granted—to live her own life. What difference would saying “I love you” in a Lifestyle Channel soft-focus blur accompanied by saccharine strings make? As they see it, the perpetrators of “honour killings” love their daughters: that’s why they kill ’em. Would Kristof wish to swap his options for the set menu served up to Muslim women? How would he like it if, just as he was getting ready to head to Oxford on his Rhodes Scholarship, his dad had announced that he’d arranged for him to marry a cousin? Oh, and in Canada.

Which brings me to my big philosophical difference with Ms. Hirsi Ali: in 2006, she was one of a dozen intellectuals to publish a manifesto against radical Islam and in defence of “secular values for all.” Often in her speeches, she’ll do a heartwarming pitch to all of us—“black, white, gay, straight”—to stand firm for secular humanism. My problem with this is that, in Europe and elsewhere, liberal secularism is not the solution to the problem but the vacuum in which a resurgent globalized Islam has incubated. The post-Christian, post-modern multicultural society is too vapid to have any purchase on large numbers of the citizenry. So they look elsewhere. The Times of London recently interviewed a few of Britain’s many female converts to Islam, such as Catherine Huntley, 21, of Bournemouth (“I’ve always been quite a spiritual person”) and Sukina Douglas, 28, of London (“Islam didn’t oppress women; people did”).

In a way, the Western left’s hostility to Ayaan Hirsi Ali makes my point for me. In Terror and Liberalism, Paul Berman wrote that suicide bombings “produced a philosophical crisis, among everyone around the world who wanted to believe that a rational logic governs the world.” In other words, it has to be about “poverty” or “social justice” because the alternative—that they want to kill us merely because we are the other—undermines the hyper-rationalist’s entire world view. Thus, every pro-gay, pro-feminist, pro-black Western liberal’s determination to blame Ayaan Hirsi Ali for the fact that a large number of benighted thuggish halfwits want to kill her. Deploring what he regards as her simplistic view of Islam, Nicholas Kristof rhapsodizes about its many fine qualities—“There is also the warm hospitality toward guests, including Christians and Jews.”

Oh, for crying out loud. In the Muslim world, Christians and Jews have been on the receiving end of a remorseless ethno-religious cleansing for decades. Christian churches get burned, along with their congregations, from Nigeria to Pakistan. Egypt is considering stripping men who marry Jewesses of their citizenship. Saudi Arabia won’t let ’em in the country. In the 1920s, Baghdad was 40 per cent Jewish. Gee, I wonder where they all went. Maybe that non-stop “warm hospitality” wears you down after a while . . .

As Paul Mirengoff of the Power Line blog observes, traditionally when useful idiots shill for illiberal ideologies it requires at least “the illusion of progressivism” to bring them on board. Islam can’t provide that, but that’s no obstacle to getting the bien pensants to sign up. As much as anyone, secular leftists want meaning in their lives. But Communism went belly up; the postwar welfare state is bankrupt; environmentalism has taken a hit in recent months; and Christianity gives them the vapours. Nicholas Kristof will not be the first great thinker to talk himself into a view of Islam as this season’s version of Richard Gere Buddhism.

At a superficial level, the Islamo-leftist alliance makes no sense: gay feminist secular hedonists making common cause with homophobic misogynist proscriptive theocrats. From Islam’s point of view, it’s an alliance of convenience. But I would bet that more than a few lefties will wind up embracing Islam to one degree or another before we’re done.