The UN's International Atomic Energy Agency now not only admits that Iran's at work on nuclear warheads, but acknowledges that Tehran never stopped working on them -- despite no end of pleas, pledges and promises.

Burned by its miscall on Iraq's weapons of mass destruction, the US intelligence community has played it too safe on this one, long insisting that Iran halted warhead research in 2003.

There were plenty of dissenting voices. But President George Bush didn't want another fight, and President Obama's already punch drunk.

Now the genie's out of the bottle of isotopes. With the departure of anti-Israel IAEA chief Mohammed el Baradei, the UN's nuke monitors can finally tell the truth. 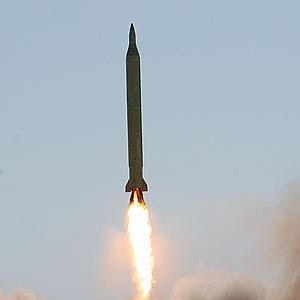 Soon to be nuclear? An Iranian missile test in September. UPI

And the truth is that Iran wants nuclear warheads badly.

President Mahmoud Ahmedinejad and the Tehran regime never stopped declaring their intention to destroy Israel. Inconvenienced, our diplomats and the White House insisted those funny-ha-ha Iranians were just kidding. Now even the UN's taking them seriously.

Yes, Iran's program has problems. It's a tortoise, not a hare. But that tortoise will cross the finish line eventually -- unless it's stopped by force.

My bet is that this administration will dither, delay and dissemble until Israel feels compelled to act, sometime in the next few years. And it's going to be a mess, with Israel fighting for its existence and a lame-duck Obama indignantly demanding a cease-fire before the job's half finished.

Even if Israel doesn't act, and even if Iran doesn't use its nukes, such weapons in Tehran's paws would shatter the regional balance of power.
Iran would gain the upper hand in the Persian Gulf -- terrorizing Arab oil producers, dominating the Straits of Hormuz and boosting the forces of terror immeasurably. Our influence would crash.

Why would a handful of nukes give Iran such power, despite our nuclear arsenal? The fanatics in charge in Tehran would be willing to pull the trigger. We're not.

If Iran's nuclear-weapons program isn't stopped, we'll face one of two devastating scenarios: an Iranian-Israeli nuclear exchange that wouldn't be containable, or living with Iran's claw on the global oil tap.

Nor would taking out Iran's nuke program be easy. It wouldn't be just a dramatic night of airstrikes followed by an awards ceremony. Tehran has dispersed its nuclear facilities, burying some deep underground and locating other key sites in urban areas -- using Iran's citizens as human shields.

Adding to the complex targeting requirements just for the nuke sites, an effective attack also would need to destroy Iran's retaliatory capabilities -- from its navy and air force to key Revolutionary Guard elements.

A military response to Iran's nuke program is a terrible idea. But, barring timely regime change in Tehran, force is the only thing that's going to work.
Unless anyone still thinks that Obama's negotiating skills will win the day.

In the midst of this infernal mess, our president's pushing his long-term goal of universal nuclear disarmament -- the hoary leftist insanity that refuses to accept that America's nuclear arsenal prevented a third world war and still protects us today (even though it's rotting from neglect).

And the rest of the world? This week, Brazil declared that it won't support economic sanctions against Iran. That's a bright-red flag, folks. It signals that, after Iran goes nuke and takes the heat, Brazil intends to become Latin America's first nuclear-armed power.

The looming catastrophe in Iran won't be an end, but a beginning.