The White House wants to play Transparency Olympics with the Tea Party movement. President Obama’s Chief Technology Officer Andrew McLaughlin dared Tea Party activists and conservatives last week to “push the administration to make its policies more open” and make it a “political competition … to see who can be more radical in their openness,” The Hill reported. So, let’s start by knocking down Attorney General Eric Holder’s national security stonewall at the Department of Justice, shall we? Let the sun shine in. 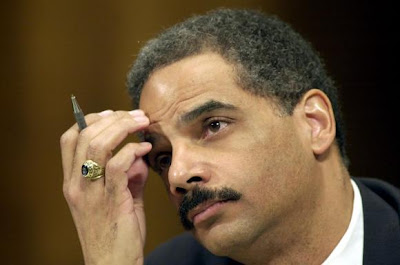 For more than a year, I’ve been writing about the looming national security and conflict-of-interest problems posed by Holder’s status as a former partner at the prestigious law firm Covington and Burling. The company currently represents or has provided pro bono representation and sob-story media-relations campaigns in the past to more than a dozen Gitmo detainees from Yemen who are seeking civilian trials on American soil.

The firm wasn’t just a bit player. It led the charge, contributing more than 3,000 hours to Gitmo litigation in 2007, according to The American Lawyer. At least one known Covington big shot and fellow former Clintonite, Lanny Breuer, now works for Holder as head of the DOJ’s criminal division. Though he himself did not participate in the detainee cases, Holder’s celebrity undoubtedly boosted company-wide prestige.

How many of Holder’s former colleagues and associates are now on the DOJ payroll? How many like them, who worked at other law firms or for left-wing lobbying groups, now inhabit DOJ offices? How many of them have been allowed to work on government terrorism cases related to their past crusades for al-Qaida-tied clients? How many have had to recuse themselves — and have those recusals been full and forthcoming? How can the public judge whether these lawyers are representing America’s best interests — or those of the jihadis?

GOP Sen. Charles Grassley of Iowa has been trying to get answers. DOJ information suppressors have snubbed him repeatedly. As the Washington Examiner’s Byron York reported on Friday, Holder has now acknowledged that “at least” nine Obama appointees in the Justice Department “have represented or advocated for terrorist detainees before joining the Justice Department.” But the tight-lipped, taxpayer-funded litigators at the agency won’t name names or cough up any relevant details.

…” Beyond two DOJ appointees whose work for jihadi defendants had already been made public, Holder gave up nothing. Zip. Zilch.

It’s not even clear that the Gitmo Nine are the end of the line. The list is not a comprehensive tally of DOJ appointees, Holder told Grassley and other GOP senators who pressed for public disclosure. Why not? What are they trying to hide? Who are they trying to spare?

Americans have a right to know whether they are subsidizing jihadi sympathizers, and whether their Justice Department is now a sanctuary for human rights transnationalists and little terrorists’ helpers in the mold of Lynne Stewart, who was convicted of abetting Muslim terrorist mastermind Sheikh Omar Abdel Rahman and spreading messages inciting violence on his behalf while representing him.

Americans have a right to know whether Holder — who put political interests ahead of security interests at the Clinton Justice Department in both the Marc Rich pardon scandal and the Puerto Rican FALN terrorist debacle — has made hiring decisions that provide for the common defense and promote the general welfare.

Tellingly, Holder has treated the GOP’s national security concerns dismissively. He’s hoping his nonresponsive blow-off of Grassley’s request will die on the vine. And just as he used his past lapses in judgment during the Clinton era to argue that they made him more qualified for the job he holds now, Holder argues that the phantom jihadi lawyers on the DOJ payroll are a good thing for the country, so we should just shut up:

“A prosecutor of white-collar fraud cases may have previously represented defendants in such cases. This familiarity with and experience in the relevant area of law redounds to the government’s benefit.”

As usual, Holder puts ordinary civilian crimes on the same footing as terrorism plots and acts of war against our country. But why not let the people decide for themselves whether his staff decisions redound to their benefit? “The American people have the right to information about their government’s activities,” Holder himself said in a press release trumpeting new freedom of information rules last year. Put up or shut up, Mr. Attorney General.
Posted by jtf at 11:20 AM