WORK. WHO NEEDS IT?

“The Big Issue, mate?” came the cheery Cockney cry. It is a tradition, in London as elsewhere, for newsboys to hawk their papers on the streets of the city. The only variation to the ancient ritual was that in this instance the salesman for The Big Issue – a newspaper sold by and for “the homeless” – was pitching his wares to me while lying prone alongside a colleague on the sidewalk of a small side street off Piccadilly. I stepped over him and continued on my way. That was Monday. Tuesday he was there again, and Wednesday. And on Thursday he demanded to know why I was resistant to his charms. So I politely suggested that attempting to persuade Londoners to transfer the fruits of their labors to him while sprawled across the pavement was perhaps not a viable business model. 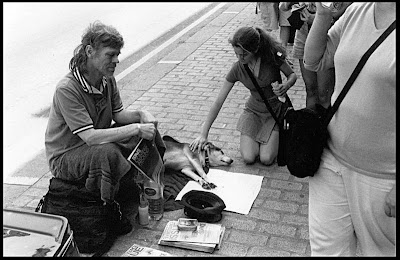 The homeless of London are often accompanied by dogs and they are sometimes selling publications like "The Big Issue".

He replied that, au contraire, apart from stingy bastards like me, most people were happy to “help” “the homeless”. I enquired in what sense, in a city with generous public housing provision, he was “homeless”, and it emerged that this was something of a term of art – in effect, a lifestyle choice for which the government paid him. All that week, every day, I stepped daintily over him and went to pick up a coffee at Caffe Nero, served by baristas from Poland who gossiped away between orders in their native tongue. At the stationer’s, I bought some notecards from a headscarved Muslim lady, and then went to the Post Office where I was served by a dapper Sri Lankan with whom I had a brief discussion on cricket. And in that hive of multiethnic commercial activity the only “English” sales clerk I encountered was the fit young “homeless” man lolling at my feet every afternoon.

As I write, the US unemployment rate is just shy of ten per cent, which is high enough to have commentators alarmed. In the United Kingdom, there are five million grown-ups – or ten per cent of the entire adult population – who have not done a day’s work since Tony Blair’s Labour Party came to power in 1997. Are they “unemployed”? Not exactly. For most of that period, Britain was booming. It still is, by comparison with most places, which is why the dulcet tones of Slavic languages ring out from every coffee counter. But not a lot of Cockney. It would be truer to say those five million Britons are not so much without employment as without need of employment: They exist in a world in which “work” is an increasingly foreign concept. In one-sixth of British households, not a single family member works. One-fifth of British children are raised in homes in which no adult works.

Remember Jay Gorney and Yip Harburg’s anthem of the Great Depression? “Brother, Can You Spare A Dime?” What he really wants is the restoration of his dignity, of his self-worth:

Once I built a railroad, made it run…

Once in khaki suits, gee, we looked swell…

The bloke on the pavement demanding “Brother, can you spare a quid?” of me every afternoon can’t boast that kind of resume. Never worked on the railroad, never worked in construction, never served in the army, never frothed up a decaf caramel macchiato. Never worked, because he never had to. One day those hardworking Poles will figure it out, too. A lot of immigrants already have. Two-thirds of French imams are on the dole. In the heavily immigrant Stockholm suburb of Tensta, one-fifth of women in their late 40s collect “disability” checks. Abu Qatada, a leading al-Qaeda recruiter, had 150,000 pounds (a quarter-million bucks, give or take) in his bank account courtesy of the British taxpayer before the drolly misnamed Department for Work and Pensions decided to cut back his benefits.

I confess a sneaking admiration for Mr Qatada, who was at least using his welfare payments actively to fund the destruction of western civilization, as opposed to just undermining it through sloth and inertia. When William Beveridge laid out his blueprint for the modern British welfare state in 1942, his goal was the “abolition of want”, to be accomplished by “co-operation between the State and the individual”. In attempting to insulate the citizenry from the vicissitudes of fate, Sir William has succeeded beyond his wildest dreams: Want has been all but abolished. Today, fewer and fewer Britons and Europeans “want” to work, “want” to marry, “want” to raise children, “want” to lead a life of any purpose or dignity. “Co-operation” between the State and the individual has resulted in a huge expansion of the former and the remorseless shriveling of the latter.

For a while, The Sun used to run a Shop-A-Sponger Hotline, fingering chaps like Alan Kenyon, who quit his last job in November 1973 and has lived since then on the government’s weekly “Jobseeker’s Allowance”, notwithstanding that, as the decades roll by, he has never attempted to seek any job. He passes his days playing his taxpayer-subsidized collection of 3,000 videos and 12,000 records. “Westerns are my favorite films,” he told The Sun. “I love Clint Eastwood.” Who doesn’t? A man of action, quick on the draw. A man of inaction, quick on the drawing of benefits, can happily watch that stuff decade in, decade out.

It happens so quickly. The “abolition of want” starts with the abolition of stigma. And once you’ve done that, it’s very hard to go back, even if you wanted to, which there’s no indication Britain’s millions of non-working households wish to do. But, if, say, you happen to be the one western nation not yet fully drugged into inertia by cradle-to-grave welfarism, you might want to pause before embracing the same fate.
Posted by jtf at 6:33 PM