Concert Review: Everything is a hit when the Boss plays


When times are hard, at least we have Bruce Springsteen to remind us that songs about hard times can still be fun.

Monday night, the Boss and the E Street Band ran through songs about murder, job loss, infidelity and more, but they managed to make it a party.

Not that the band doesn't have fun songs, but it's kind of amazing that a song like "Johnny 99," about a laid-off auto worker who kills a clerk and requests the death penalty, can get a crowd jumping, dancing and pumping its fists. 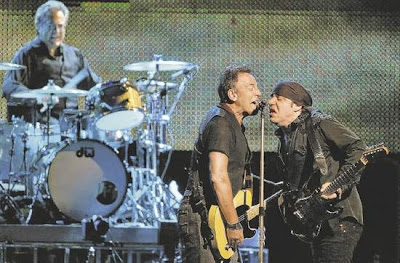 The E Street Band played its first central Iowa show in decades Monday, and Springsteen, just two days away from his 60th birthday, reminded the room of his incredible ability to craft music stories.

"We're going to build a house in the room out of music and out of spirit and out of noise," Springsteen told the crowd early on, pumping up the room with a revivalist's furor. He kept the crowd involved in the show, making them sing the opening of "Hungry Heart" and wandering into the crowd during the song.

He also wandered down to collect from the crowd what looked like signs, but were actually requests for the "Stump the Band" portion of the show. Springsteen made his selection, hiding it from the band and giving hints until guitarist Steven Van Zandt figured it out. Once Van Zandt knew it, Springsteen led the band into the E Street Band's first-ever performance of Dion's "The Wanderer."

The song selections ranged from all over the E Street Band's discography and Springsteen's solo material. Old favorites like "10th Avenue Freeze-Out" and "Badlands" bumped up against more obscure tunes like "Youngstown" off "The Ghost of Tom Joad" and newer material from this year's "Working on a Dream." Old, new, known, unknown, the crowd reacted like every song was a favorite.

Counting backup singers, there were 11 musicians on stage for the show. Most stayed relatively stationary, with Springsteen moving among them freely to sing into their microphones and play guitar next to them. Other than Springsteen, Van Zandt and guitarist Nils Lofgren were the only ones showing much movement.

A pleasant surprise for the evening was drummer Max Weinberg being on the skins. Weinberg's position as bandleader for "The Tonight Show" has meant he's had to miss a few shows on this tour, with his 19-year-old son, Jay, filling in. Max Weinberg's steady drumbeat is such a integral part of the band sound that it's hard to imagine the E Street Band playing without him.

As the band has aged, the stage presence of Springsteen himself remains remarkable. At one point, he hung from his mike stand in a position that most musicians half his age would be unable to pull off.

At a Springsteen show, the constant cries of "Bruuuuce!" can sound a bit like boos, but it's just a trick of the ears. There was not a "boo" to be had from the thoroughly satisfied crowd. 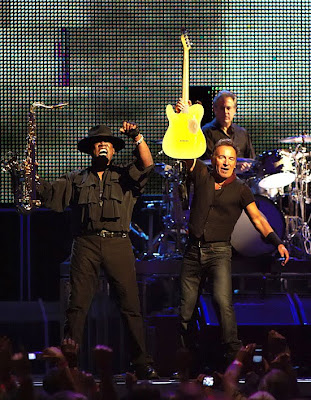