Persecution of Christians Increasing in Iraq


On Sunday, July 12, Aziz Rozko Hanna, an Iraqi Christian who was serving as director of the Department of Financial Control of the city of Kirkuk, was driving with his daughter in Dumiz, a Christian neighborhood in Kirkuk, when he was stopped, pulled from his car, and shot dead in front of his daughter. 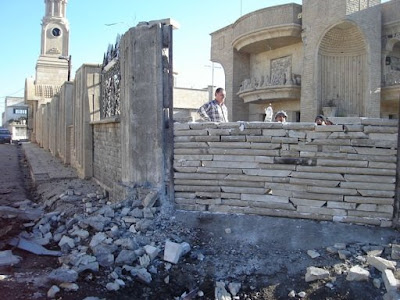 On the same day, five churches in Baghdad were bombed, wounding eight civilians. And all this has come after persecution and harassment that has led over half of the Christians in Iraq to leave the country in the last few years. The situation has gotten so bad that the Roman Catholic Archbishop of Baghdad, Jean Benjamin Sleiman, said in May: “I fear the extinction of Christianity in Iraq and the Middle East.”

Sleiman has good reason to fear. In 1909, the Middle East was 20 percent Christian; one hundred years later, that percentage has fallen to five percent. This decline is directly related to the resurgence of the Islamic jihad and Islamic supremacism around the world in the twentieth and twenty-first centuries. As Muslimsreassert traditional Islamic legal stipulations mandating and institutionalizing discrimination against and harassment of Christians, Christians all over the Islamic world are feeling the heat.

Quasi-secular despots such as Saddam Hussein were not interested in enforcing the provisions of Islamic law mandating second-class status for non-Muslims. (Saddam chose his murder victims on other bases.) Christians enjoyed relatively equal rights under his regime, but after he was toppled, things began to change radically. Groups dedicated to the imposition of Islamic law over the country began to victimize Christians on a large scale. In March 2007, Islamic gangs knocked on doors in Christian neighborhoods in Baghdad, demanding payment of the jizya -- the special tax the Koran mandates for non-Muslims who submit to Islamic rule.

Nor was that the beginning of the terrorizing of Iraq’s Christians. In October 2006, a Syrian Orthodox priest, Fr. Boulos Iskander, was kidnapped in the Iraqi city of Mosul. He was never seen alive again. A Muslim group demanded $350,000 in ransom; they eventually lowered this to $40,000, but added a new demand: Fr. Boulos’ parish had to denounce the remarks made the previous month by Pope Benedict XVI in an address in Regensburg, Germany, that caused rioting all over the Islamic world. The ransom was paid, and the church dutifully posted 30 large signs all over Mosul, but to no avail: Fr. Boulos was murdered and dismembered, not necessarily in that order.

Five hundred Christians attended the funeral of Fr. Boulos Iskander. Another priest commented: “Many more wanted to come to the funeral, but they were afraid. We are in very bad circumstances now.”

This murder took place against a backdrop of increasing persecution of Christians in Iraq. Women were threatened with kidnapping or death if they did not wear a headscarf; in accord with traditional Islamic legal restrictions on Christians “openly displaying wine or pork” (in the words of a legal manual endorsed by Cairo’s venerable Al-Azhar University), liquor store owners in Iraq were threatened and some were murdered. Many of their businesses were destroyed, and the owners fled. A onetime Iraqi liquor store owner now living in Syria lamented that “now at least 75 percent of my Christian friends have fled. There is no future for us in Iraq.”

Now that Barack Obama is removing U.S. troops from Iraq, this resurgent Islamic supremacism will only gain momentum. Though he could have helped protect Iraq’s Christians, Obama has shown no interest in using his bully pulpit to alleviate their plight. Instead, Obama has manifested a disquieting eagerness to cozy up to Sharia regimes – notably the one in next-door Iran, which is working still to create a Shi’ite client state in Iraq. Christians, as well as other non-Muslims, will suffer increasingly, in direct proportion to Iran’s success in Iraq. Muslim persecution of Christians -- built as it is into the foundations of Islamic theology and law -- is only going to increase as the Islamic reawakening continues in the Muslim world. Obama should -- if he had the guts and the vision that so many loudly proclaimed that he had -- stand up and say, “No more.” But he won’t.

Mr. Spencer is director of Jihad Watch and author of "The Politically Incorrect Guide to Islam (and the Crusades)", "The Truth About Muhammad," and "Stealth Jihad" (all from Regnery -- a HUMAN EVENTS sister company).
Posted by jtf at 5:42 AM