An All-Star meeting: Musial and Pujols 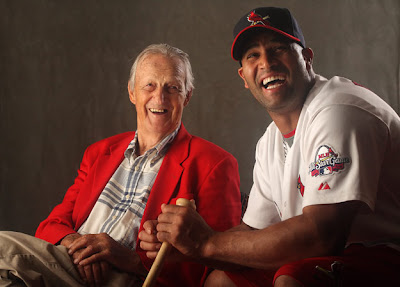 Between the photo clicks, the picture that emerged was one of two St. Louis baseball icons from different eras with an admiration for each other. They traded tips on hitting, joked about their salaries and golf games and showed appreciation for a baseball bat as only two sluggers of their stature could.

Musial, who appeared in 24 All-Star Games and is expected to play a key role in Tuesday's pre-game ceremony, was asked point-blank if Pujols was the greatest Cardinal since himself.

Musial, a few months shy of 89 years old now, went on to point out that Rogers Hornsby, who played a couple of decades ahead of Musial, would have to be considered on the all-time Cardinals list. "He hit .400 three times," said Musial.

But since Musial retired in 1963, he said, the best Cardinal he has seen is Pujols.

Pujols, for instance, could soar past Musial's 475 home runs as a Cardinal. But one mark he or anyone else isn't likely to match is Musial's achievement of having 1,815 hits on the road and 1,815 hits at home.

"That's impressive," said Pujols, smiling. "I wonder if he meant to do that."

"Well, I got two hits at home in my last game," said Musial, also smiling. 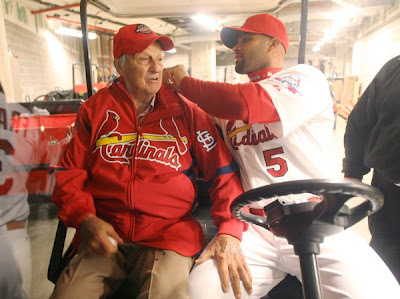 As they sat together, holding one of Pujols' bats, they agreed that they had used the same length of bat (34½ inches) and the same weight (33 ounces) at one time; but Pujols, in deference to the occasional flare-up of his left elbow problem, has dropped to 32 ounces this year.

"I don't like the bat to be too heavy," said Pujols. "I'm looking for more balance."

About the only difference in their bats was that Pujols' is cupped at the end and Musial's wasn't.

But there was a considerable difference in the two men's playing weights.

Musial, flexing Pujols' right arm, asked Pujols what he weighed, and Pujols responded, "240 pounds. What did you weigh?"

Musial's corkscrew stance was and is unique in the game.

"I don't think I've got the strength to do that," said Pujols.

Trying to take advantage of the rare meeting with Musial, Pujols asked Stan what his approach with two strikes in the count was.

"What I try to do is let the ball get deep as much as I can," said Pujols. "Do you have anything to help me out?"

But, Pujols then asked, "What if you have a bad umpire?"

Musial had a quick retort. "If they called a bad strike on me, I would give him a mean look," said Musial, who really doesn't have a mean look. 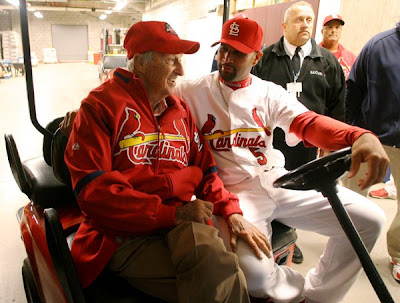 Although Pujols told Musial that manager Tony La Russa sometimes chided Pujols for not swinging at more first pitches, Musial and Pujols agreed that on their first at-bat in a game, they liked to work long counts. "I didn't like to swing at the first pitch," said Musial. "I liked to see what the pitcher was throwing."

And Pujols said to Musial, "If I can see six or seven pitches in an at-bat, that's good. Let's say a guy has a good change-up or a good breaking ball. Now I have an idea of what he'll throw when men are in scoring position. I know how the breaking ball moves, and I know how the change-up breaks. So he can't trick me later on."

But Pujols acknowledged, "I may only get one pitch to hit in a game."

Ever the Cardinals fan, Musial asked Pujols about his contract status. "A couple of more years," said Pujols, referring to the expiration (with the option) of his contract in 2011.

"Can I borrow a couple of hundred thousand?" cracked Musial.

At this, Pujols laughed and said, "I know you would pay me back. Don't you wish you were playing in this era?"

"Wow," said Pujols. "For all those years? My Lord. Believe me, if you were playing in this era, you would probably make that in one day."

Musial, upon hearing that Pujols lived reasonably near Spirit of St. Louis Airport, said, "Do you fly your own plane?"

"Not yet," said Pujols. "I don't think the contract allows that." 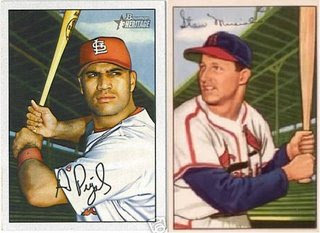 A golfer himself at one time, Musial asked if Pujols played, and the latter answered that he was a 10-handicap.

Musial announced that he was a 3-handicap.

Pujols roared. "That's a good one," he said. "I'm going to steal that from you."

At this point, Pujols was about to take his leave to get ready for the game that night. "Thank you for taking the time," Pujols said, sincerely, to Musial.

Was it only coincidence that Pujols would hit two home runs that night after sharing a bat and advice with Musial? Maybe not.

"Next time, you come around, I want to talk hitting," said Pujols. "I want to pick your brain."

Musial said, "You ever talk to Red Schoendienst?"

Musial clearly enjoyed the visit of batting kings from different eras but with so many similarities.

"You know what Pujols does when he sees me?" said Musial. "He did it, when he first came up as a rookie. When he sees me, he gives me a hug and a kiss on my forehead."