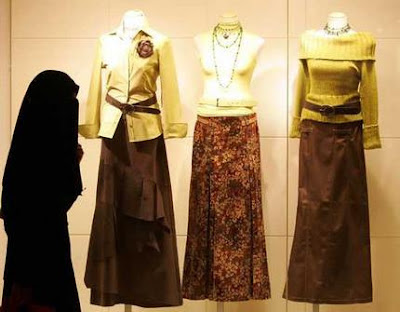 Why no campaigns against Saudi Arabia's institutionalized sexism?

A Saudi woman walks past a boutique at a shopping mall in Riyadh September 27, 2004.

"A court in Country X sentenced a black man who had been severely beaten by white men to six months in jail and 200 lashes."

How would you react if you read that in a newspaper? With shock, horror, and anger at the regime in Country X, no doubt. And once you learned that punishing blacks for associating with whites is routine in Country X, you might get even angrier. You might call for sanctions, you might insist that Country X not participate in the Olympics. You might insist that Country X be treated like apartheid-era South Africa.

In fact, the sentence is real—almost. When originally published on the CBS News Web site last month, it concerned a woman, not a black man, and Country X was Saudi Arabia. Here is the real quote:

A Saudi court sentenced a woman who had been gang raped to six months in jail and 200 lashes.

True, this extraordinary case, in which a rape victim was condemned for associating with a man who was not a relative, did create a small international echo. Hillary Clinton led a chorus of Democrats condemning the ruling, and a few editorials criticized it. It wasn't much, but it mattered: Thanks to international pressure, the Saudi king has now "pardoned" the woman. And now? In Saudi Arabia, women still can't vote, can't drive, can't leave the house without a male relative. No campaign of the kind once directed at South Africa has ever been mounted in their defense.

This comparison of Saudi and South African apartheid, and the different Western attitudes to both, has been made before. Recently, journalist Mona Eltahawy argued that while oil is a factor, the real reason Saudi teams aren't kicked out of the Olympics is that "Saudis have succeeded in pulling a fast one on the world by claiming their religion is the reason they treat women so badly." Islam, she points out, does take other forms—in Turkey, Morocco, Indonesia, and elsewhere. But Saudi propaganda, plus our own timidity about foreign customs, has blinded us to the fact that the systematic, wholesale Saudi oppression of women isn't dictated by religion at all, but rather by the culture of the Saudi ruling class.

I think there is another explanation, too. As a nation, we are partial to issues that seem familiar, and the story of apartheid South Africa had echoes in American history, in our own civil-rights movement. It wasn't that big a leap for Jesse Jackson to support the anti-apartheid movement when it was at its peak in the 1980s, and it wasn't that hard for college students at that time, either: We had been taught about institutionalized racism in school.

By contrast, the women of contemporary Saudi Arabia need a much more fundamental revolution than the one that took place among American women in the 1960s, and it's one we have trouble understanding. Unlike American blacks, it has been a long time since American women grappled with issues as basic as the right to study or vote. Instead, we have (fortunately) fought for less fundamental rights in recent decades, and our women's groups have of late (unfortunately) had the luxury of focusing on the marginal. The National Council of Women's Organizations' most famous recent campaign was against the Augusta National Golf Club. The Web site of the National Organization for Women (I hate to keep picking on them, but it's so easy) has space for issues of "non-sexist car insurance" and "network neutrality" but not for the Saudi rape victim or the girl murdered last week in Canada for refusing to wear the hijab.
The reigning feminist ideology doesn't help: Philosopher Christina Hoff Sommers has written, among other things, that some American feminists, self-focused and reluctant to criticize non-Western cultures, have convinced themselves that "sexual terror" in America (a phrase from a real women's studies textbook) is more dangerous than actual terrorism. But the deeper problem is the gradual marginalization of "women's issues" in domestic politics, which has made them subordinate to security issues or racial issues in foreign policy. American delegates to international and U.N. women's organizations are mostly identified with arguments about reproductive rights (whether for or against, depending on the administration), not arguments about the fundamental rights of women in Saudi Arabia or the Muslim world.

Until this changes, it will be hard to mount a campaign, in the manner of the anti-apartheid movement, to enforce sanctions or codes of conduct for people doing business there. What we need as a model, in other words, is not the 1960s feminism we all remember, but a globalized version of 19th-century feminism we've nearly forgotten.

Candidates for the role of Elizabeth Cady Stanton, anyone?