Ed Koch: Does Gore Know What He's Talking About? 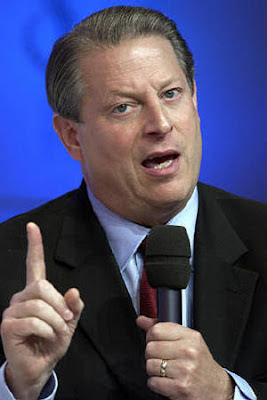 I may be old fashioned, but I think it's wrong to publicly attack and criticize your own country overseas. It is doubly wrong to do so in the presence of those who hate the United States.

This month in Bali, Indonesia, the United Nations held a conference on global warming for the purpose of extending the Kyoto Protocols, which will formally end in 2012. The United States -- concerned about Kyoto's effect on economic growth -- has refused to ratify the Protocols. On July 25, 1997, the U.S. Senate rejected then Vice President Gore's advice and voted 95-0 to reject the Kyoto Protocols.

Last week Al Gore appeared at the Bali conference and said, "I am not an official of the United States and I am not bound by the diplomatic niceties. So I am going to speak an inconvenient truth. My own country, the United States, is principally responsible for obstructing progress here in Bali. We all know that."

Oh, really? And just how do we all know that? Is it true that the U.S. is "principally responsible for obstructing progress" in Bali? The New York Times, which applauds the former Vice President, reported on December 14 that "[t]he emerging economic powers, most notably China and India, also refuse to accept limits on their emissions, despite projections that they will soon become the dominant sources of the gases." The same Times article stated while the U.S. opposes an agreement that would include numerical targets, so do "a few other countries, including Russia."

On November 7, 2006, The Times reported, "China will surpass the United States in 2009, nearly a decade ahead of previous predictions, as the biggest emitter of the main gas linked to global warming, the International Energy Agency has concluded in a report to be released Tuesday." The article continued, "China's rise, fueled heavily by coal, is particularly troubling to climate scientists because as a developing country, China is exempt from the Kyoto Protocol's requirements for reductions in emissions of global warming gases.

Unregulated emissions from China, India and other developing countries are likely to account for most of the global increase in carbon dioxide emissions over the next quarter-century. The agency's prediction highlights the unexpected speed with which China is emerging as the biggest contributor to global warming. Still, China has resisted limits on its own emissions and those of other developing countries."

President Bush has been attacked by Al Gore and his supporters for resisting a treaty that could inflict economic harm on the American people. Does Al Gore seriously think that we should reduce the U.S. standard of living until developing countries -- formerly called Third World countries until that term was discarded as demeaning -- catch up with us economically?

China is growing at a tremendous rate. So far this year, China's gross domestic product has grown 11 percent, while U.S. growth is two percent. According to The Times, India has a middle class of 250 million, while the entire U.S. population is 300 million. What's going on here? These facts alone make clear it is not necessary to effectively mandate a reduction in the U.S. standard of living in order for other nations to grow.

I wonder if Al Gore knows what he's doing. Reducing and sacrificing the U.S. standard of living as a way to bring others up the ladder, rather than allowing the U.S. to maintain its living standard while encouraging and helping others to reach our level, is a foolish and dangerous plan. It is simply unacceptable. Al Gore and his friends live in a Democratic society and have the absolute right to say what they want. But those of us who do not want to see the U.S. punished because of its success have rights, too. I believe it is our duty to denounce Al Gore's unwise attacks on America and hold him accountable for what he says.

Today, China has a hugely favorable balance of trade with the U.S. In 2006, for example, China's net favorable balance was more than $232 billion. The New York Times on December 14, 2007 reported that "China's trade deficit with the United States is expected to soar to nearly $300 billion this year, representing nearly half the overall American trade deficit." Thanks to these enormous trade advantages, China has now accumulated more than $1.4 trillion dollars which they can use to buy up our industries cheaply, especially now when so many American business leaders are prophesizing an American recession. The Chinese have actually set aside $200 billion for the purpose of making such purchases worldwide, as a start.

Should Al Gore be out there creating the impression that the U.S. primarily is the cause of global problems? I say "no." It is particularly galling when a recent Wall Street Journal article reported: "Under the vaunted Kyoto, from 2000 to 2004, Europe managed to increase its emissions by 2.3 percentage points over 1995 to 2000. Only two countries are on track to meet targets...[M]eanwhile in the U.S., under the president's oh-so-unserious plan, U.S. emissions from 2000 to 2004 were eight percentage points lower than in the prior period."

In other words, when it comes to the emissions problem, the U.S. is leading the way toward solving the problem without throwing millions of people out of work.

Ed Koch is the former Mayor of New York City.
Posted by jtf at 11:03 AM