The Signature of Man 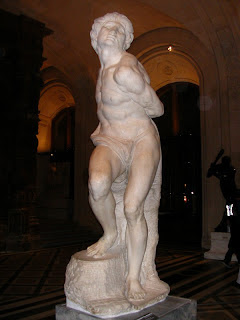 There is one great artist whose art was ultimately sacred and seraphic, yet in its labour and technique peculiarly strenuous and military; if one looked at his work only one would think of a harsh angel, an angel in armour. How comes it that this man actually bore the name of the Archangel Michael—Michelangelo? How comes it that a contemporary and more gracious artist happened to be christened after a more gracious archangel—Raphael?

Ordinary people call the great sculptor Michael Angelo, because that is his ordinary name. The most penetrating and spiritual personalities also call him Michael Angelo, because to them he is indeed the Angel Michael. It is foolish, indeed, to talk about the paganism of the Renaissance; Michael Angelo was more decisively Christian than any other artist after Christianity; much more Christian than Fra Angelico. His splendid sculpture called The Slave could not have been created in simple slave earning times; it represents a huge and heaving human figure struggling to be free. In short, there was a man whose surname was Buonarotti; we have never heard of that name, and it is doubtful if he had ever heard of it himself: I mean as a part of himself. All tradition has called him Michael the Angel because all tradition has felt him to be Michael the Angel. Michael destroyed the devils by smiting them; Michael Angelo destroyed the Titans by creating them. Here then the two essentials of a state are at one. The same words, "Michael the Angel," would spring to the mouth both of the learned and the quite unlearned man. The literate and the illiterate are combined; and together they sweep the world. But the cultured man is left alone in the middle: for he says "Buonarotti." 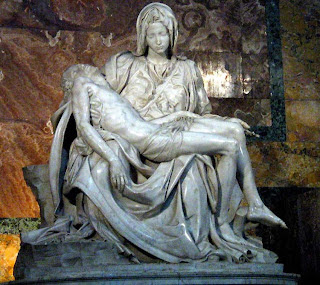 What do you feel first if I mentioned Michael Angelo? It might be the sense of the majestic hands of Man upon the locks of the last doors of life; large and terrible hands, like those of that youth who poises the stone above Florence, and looks out upon the circle of the hills. It might be that huge heave of flank and chest and throat in The Slave, which is like an earthquake lifting a whole landscape; it might be that tremendous Madonna, whose charity is more strong than death. Anyhow, your thoughts would be something worthy of the man's terrible paganism and his more terrible Christianity. Who but God could have graven Michael Angelo; who came so near to graving the Mother of God?

Though Michael Angelo was original, he was sufficiently traditional to be praised for his originality. In spite of the current argument for artistic novelties, it is not true that the world received the originality of the old artists as it does the novelty of the new artists. There was plenty of neglect, plenty of negative injustice, plenty of petty criticism or private spite; but the utterly uncomprehending and angry reaction against the new art is a new thing. Any artist who does not see the difference is failing in the very first thing in which an artist should succeed. He is failing in measurement, which is a great part of judgment. He is failing in a matter of proportion, which fools call a matter of degree.

There is a figure in one of Michael Angelo's frescoes in which the legs are somewhat lengthened so as to give an overwhelming impression of flying through the air. But if the legs had been extended indefinitely, like the two parallel straight lines that could never meet, if they had wandered away in two endless strips over the whole of the Sistine Chapel, they would not produce any impression of rushing or of anything else. But the modern sensationalist has no notion of effecting anything except by extending it; by tugging its nerves out telescopically like some form of Asiatic torture, and increasing the pleasures of man by interminably pulling his leg. And that is why some of us feel the presence of something stupid and even barbaric in all this progress and acceleration, because it is but the elongation of one line and the exaggeration of one idea.

We all know this about modern art. Michelangelo and Whistler were both fine artists; but one is obviously public, the other obviously private, or, rather, not obvious at all. Michelangelo's frescoes are doubtless finer than the popular judgment, but they are plainly meant to strike the popular judgment. Whistler's pictures seem often meant to escape the popular judgment; they even seem meant to escape the popular admiration. They are elusive, fugitive; they fly even from praise. Doubtless many artists in Michelangelo's day declared themselves to be great artists, although they were unsuccessful. But they did not declare themselves great artists because they were unsuccessful: that is the peculiarity of our own time, which has a positive bias against the populace.