Film Review: "In the Valley of Elah" 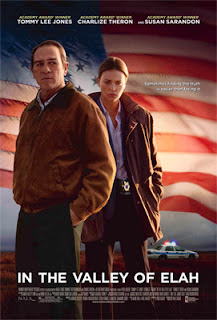 Down on The Valley

Most people who’ve taken an acting class are probably familiar with the term “indicating.” It’s used to note when an actor is overtly signaling to the audience that he or she is feeling an emotion rather than simply playing the feeling, and it’s considered one of the worst sins a performer can commit. Paul Haggis isn’t an actor, but maybe he could use a course or two, because in his newest film, In the Valley of Elah, he spends most of the running time engaged in the directorial equivalent of indicating, and it’s just as wearisome here as it is in Intro to Theater.

But of course, Haggis, who both wrote and directed Elah, is no beginner. In fact, he’s got an award-filled Hollywood pedigree. In 2005, he was nominated for a Best Writing Oscar for Clint Eastwood’s Million Dollar Baby, a dopey downer of a film that mixed boxing drama with cheap moral conundrums about assisted suicide, and which, of course, ended up bringing home the award for Best Picture. He followed that up by writing and directing Crash, a hilariously contrived bit of goopy racial gobbledygook dressed up like a high-class drama. Needless to say, it won Best Picture too.

That means that these days, Haggis is operating under the Tinseltown equivalent of a voter mandate to make films that are morally resonant, big and bold, concerned with the deep ambiguities and complexities in American life and, indeed, all human nature. But since he’s pretty clearly incapable of doing that, he went for the next best thing: Bash the Iraq war.

Thus, Elah is part murder mystery, part anti-war agitprop, and all tedium. In rural Tennessee, Hank Deerfield (Tommy Lee Jones), whose country-boy name is Hollywood shorthand for “some guy from the sticks who probably drives a pick-up truck” (he does), finds out that his son, a soldier just returned from Iraq, has gone AWOL. He drives out to his son’s military base and finds his son not just missing, but gruesomely murdered. Assisted by Detective Emily Sanders (Charlize Theron) and armed with both a handy background as a military cop and observational powers that would make Sherlock Holmes spew out his afternoon tea, he shows up both the squad of dirt-dumb good old boys running the local police department and the ruthless, uncaring military police who only want to make the incident go away.

For two hours or so, the mystery plods forth, and unraveling it is about as tense and exciting as a long lecture from John Kerry. But all that story guff is secondary, really, because Haggis, Oscar-winning sage that he is, has wisdom to impart. So there’s a lot of laughably obvious symbolism, yokel stereotypes, and long, meaningful pauses, all of which are intended to teach us something — something Haggis really, really wants to know is Very Important — about the degrading effects of war. It’s like an especially lame episode of Murder, She Wrote mixed with a tenth-grade speech class.

The whole thing is creaky and glum, portentous and preposterous, and generally lifeless no matter who’s on screen. Jones, whose creased, leathery face increasingly resembles satellite photography of extremely rocky terrain, plays Hank as slow and stubborn, simple but not stupid, prone to occasional temperamental outbursts but, overall, a man of few emotions. Hank’s not a character so much as a placeholder, a drooping, dour mug that Haggis can use to fill his maudlin frames and thus reinforce his general aura of sadness.

But it’s not just Jones’s performance that drags the film down. Haggis seems incapable of crafting any character that isn’t top-grade stereotype. Susan Sarandon, who, as Hank’s wife Joan has a few hammy scenes in the beginning and then seems forgotten, douses every word in a deep-fried accent so unconvincing I’d be surprised if she could even find Tennessee on a map, much less actually sound like she’s from there. The owners of a gun store Hank visits are a perfect NRA caricatures — an obese wife with big hair and a lanky old man with a cowboy shirt and an oversized belt buckle. Soldiers are square-jawed grunts who can always be bought or placated with a shot of Jim Beam. The local cops are fat, crass, and lazy. As with Crash, Haggis doesn’t really care about anything as mundane as people; in his world, everyone is just a type, a walking symbol whose purpose is first and foremost to represent an idea about The Way The World Is.

Haggis films everything in capitol letters, spelling out his (mostly lame) intentions with brain-numbing obviousness. Everything scene is lit in a dull, cloudy gray; there are, quite literally, no sunny days in Haggisland. Conversations either involve people spouting faux-poetic platitudes (“You shouldn’t send heroes to Iraq.”) or making obvious chit-chat about things that don’t matter in order to show that they’re actually worried about things that do matter.

And, of course, he peppers every scene with great, yawning pauses, presumably to ensure we absolutely understand the gravity of it all. Haggis clearly intends to be pointedly sparse and minimalist, but ends up largely empty and dull. He’s clearly convinced himself that he’s saying something meaningful and groundbreaking, delivering the hard truth that no one else wants to say. You can tell he’s convinced because he feels the need to constantly remind you of it. The whole thing is like listening to a guy who makes a regular point of loudly and grandly declaring how humble he is.

Perhaps this is to be expected. After all, it’s fall in Hollywood — prestige season — and Haggis is now an officially-licensed purveyor of movie-land seriousness. Elah is shameless Academy-bait, self-righteous, bullying, entitled, and tiresome, like a snotty student explaining why the professor simply must be wrong. And maybe that would be fine if Haggis had anything to say worth listening to. But in the end, the best he can come up with is a lame-brained slam against soldiers who’ve seen battle. He thinks he’s speaking truth to power, but with this sort of blatantly obvious Oscar-bid, it’s more like he’s speaking stupid to prestige — or at least he hopes.

Conservatives will no doubt make plenty of hay over the way Haggis treats soldiering. But his point is too broad, too unserious, too thickheaded, and too full of itself to be taken seriously. Elah isn’t bad because it’s antiwar; it’s bad because it’s artless and dumb.

—Peter Suderman is associate editor of Doublethink. He blogs at theamericanscene.com.