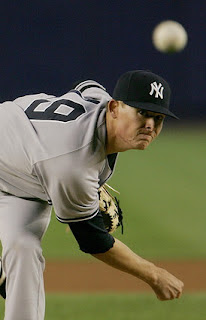 Yankees' Tyler Clippard pitches against the Mets at Shea Stadium.

NEW YORK -- The weekend did not pass without an exchange between George Steinbrenner and manager Joe Torre.

While The Boss' chat was supportive, Torre needed something more than an encouraging word. He required exactly the type of game that 22-year-old right-hander Tyler Clippard delivered Sunday night.

Amid the intense heat of the Subway Series finale at Shea Stadium, Clippard's six solid innings offered the Yankees a dash of light at their darkest hour.

"It was unbelievable tonight," Clippard said after limiting the Mets to one run on three hits and three walks in a 6-2 Yankees' victory. "Best day of my life, for sure."

And all this happened while the Red Sox were settling in their New York hotel rooms, preparing to extend their 10½-game lead in the AL East. 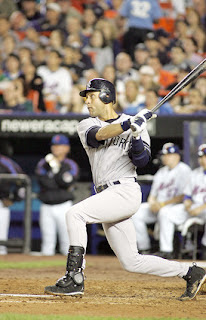 In the fourth inning, Derek Jeter hit a two-run homer with Johnny Damon aboard.

Starting tonight, the Yankees will have their Big Three going in this three-game series: Chien-Ming Wang, Mike Mussina and Andy Pettitte.

But Clippard earned himself a worthy dose of Torre's trust.

"He was out there like he wasn't aware of where he was pitching," Torre said of Clippard, who had six strikeouts and even stroked a double. "I was very comfortable watching him."

Torre's comfort had improved Saturday, despite the Yanks' 10-7 loss.

"It was all about support," Torre said of the talk with Steinbrenner, which took place in his office, during what Torre declared to be "the toughest stretch, probably, we've gone through" since he took over as the Yankees' manager.

General manager Brian Cashman was speaking on his cellphone with Steinbrenner, and Torre asked to talk with the 76-year-old owner who hasn't exactly hid his displeasure about his club's start.

"It means a lot to me," Torre said of The Boss' backing, and added that "even though our record doesn't look like the Yankee record should look (19-23), the effort is still there."

Certainly, Roger Clemens' presence has bought Torre and Cashman some additional time, and the Rocket's first start could come as early as May 28.

For now, the Yanks are still dependent on their baby-faced pitchers. 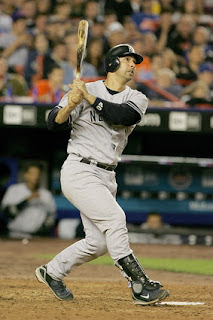 Jorge Posada hits a solo homerun off of Mets' John Maine to put the Yankees in the lead 5-1 in the 5th inning. Posada leads the AL with a .382 batting average.

Before a largely hostile crowd at Shea, Clippard became the fifth Yankees starting pitcher to make his major league debut this season.

Over his last five starts at Class AAA Scranton, Clippard, 22, went 3-0 with a 1.40 ERA. But his promotion was dictated by Tuesday's rainout in Chicago and a disabled list swelling with pinstriped pitchers.

"When I first walked out in the stadium, it was kind of overwhelming," said Clippard, who threw 95 pitches. "But when I started in the first inning and got used to that atmosphere, it was a little better than I thought it was going to be."

Clippard wasn't afraid to throw breaking pitches on full counts, and showed off his fastball-curveball-change-up combination during a 1-2-3 first inning.

"A big confidence booster for me," Clippard said.

The only run off Clippard was a David Wright solo homer in the second inning, when Clippard dodged additional trouble. 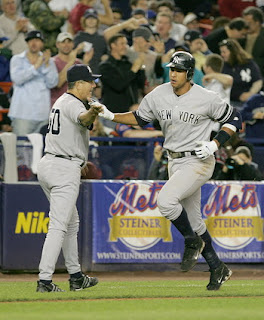 Alex Rodriguez high fives with third base coach, Larry Bowa after hitting a solo homerun in the 7th inning. Rodriguez upped his season totals to 17 home runs and 41 RBI.

After issuing an intentional walk, Clippard walked pitcher John Maine on a full count to load the bases. But he retired Reyes on a pop fly to keep it a 1-0 game.

"I was thankful I made a good pitch in that situation. I wanted to keep our team in it," said Clippard, who had the game ball and the lineup in his locker.

And he had help.

Jorge Posada's solo homer in the fifth extended his hitting streak to 15 games, and he passed Roger Maris into 10th on the Yankees' all-time homer list (204).

Jeter already had doubled to extend his hitting streak to 15 games.

E-mail: caldera@northjersey.com
Posted by jtf at 7:11 AM