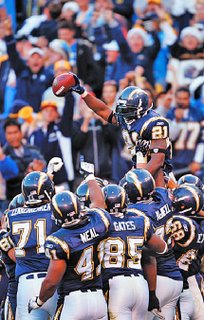 Qualcomm Stadium has become such a magical place, where only good can happen, you half expect to see Mickey Mouse, Donald Duck and Goofy running for touchdowns. Instead, there's one Charger playing as if he just stepped out of a cartoon, tailback LaDainian Tomlinson, who spends more time in end zones than lawn does.

And yesterday, as everything continued to fall into place for the Chargers during the bewitching ride that has been their 2006 season, Tomlinson only added to the happiness. The moment to remember is LT being mobbed by his teammates and then carried off the field after he scored his third touchdown of the game and 29th of the season, setting an NFL record, as San Diego pounded Denver 48-20 and fans chanted “LT! LT! LT!”
It ranks as one the great snapshots in the stadium's 49-year history.

“I tell you what, it was an awesome moment,” quarterback Philip Rivers was saying. “I had the chills. ... I mean you really did. It was that special, looking around the stadium and at everybody in the stands. Not one person was sitting down.”

LT's a big part of the story, but it is a story with many parts.

Unbeaten at home this season and winners of seven straight games, the Chargers somehow can't help but have everything go their way. Their victory over the Broncos, coupled with Kansas City's loss to Baltimore, assured them the championship of the AFC West.

“So many special things happened to this team today,” Tomlinson said. “When we're old and can't play this game, those are moments we're going to remember. Being able to tell our kids, to tell our grandchildren, but not only me, the offensive line, our fullback Lorenzo (Neal), obviously the tight ends. We can talk about something special that we did. We made history today.”

Indianapolis lost to Jacksonville yesterday, so the Bolts now are in position to have home-field advantage throughout the playoffs. It's a big deal, a warm-weather team staying home in January – especially when that place has become such an advantage.

“We knew what we were playing for today, and we took care of business,” said Rivers, who had a very good and efficient afternoon against a solid defense, throwing for 279 yards and two touchdowns to tight end Antonio Gates. “Everybody was talking about if this and if this and if this, then this, and we didn't get caught up in that. But obviously, we knew the situation, that Kansas City and Indianapolis lost before we kicked off. We control our own destiny.”

That they do. If they win their remaining three games – two of them at home – the Chargers automatically will draw a first-round playoff bye and have home-field advantage. But they're in the playoffs and not thinking that far ahead.

“You know, if we keep adding on to the record, that's great, but my main concern is really locking up home-field advantage,” Tomlinson said.

The Chargers are 11-2 and now have to be considered the NFL's best team. Their depth of talent was obvious when linebacker Shawne Merriman missed four games due to a suspension for steroids and the team won all four. Yesterday, the Chargers were without receivers Keenan McCardell and Malcom Floyd and still put up 48, the most points scored in a regular-season game on a Mike Shanahan-coached team.

Unlike Chargers of the past, this team can close. They have scored 163 points in fourth quarters alone – 20 in this one – more points than the Raiders and Buccaneers have scored their entire seasons. Their 425 points (32.7 per game) are 54 shy of the team record set in 1985. Four times they have scored more than 40.

And with the return of Merriman and defensive end Luis Castillo (ankle sprain), the threat of constant pressure is there. But the defense is not close to being as good as it can be.
“To become the team we want to become, we have to finish games out for 60 minutes,” said Merriman, who sacked Denver quarterback Jay Cutler late in the game, forcing a fumble and recovering it to set up LT's third touchdown of the day.

The Chargers were up on the Broncos 28-3 at halftime, but as has been their wont of late, they allowed a team to come back and make a game of it in the third quarter – thanks in large part to Antonio Cromartie's lost fumble on a kickoff return. The visitors closed to within 28-20 as the third quarter ended, but the hosts put up 20 points in the fourth, the icing being LT's record-breaker.

As Tomlinson said, the record's out of the way now – he's outscored the Raiders and Bucs by himself – so it's time for other business. The Chargers aren't done. But they are champions of the AFC West.

In what better spot than the Second Happiest Place on Earth?