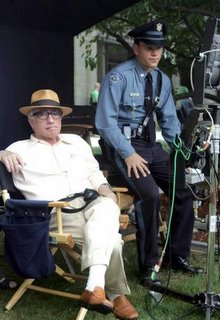 Hoodfellas: Scorsese returns to mean streets with a hit in 'The Departed'

Martin Scorsese won't be winning any Oscars for "The Departed." The movie's too hard, too pulpy -- too good. A relentlessly violent, breathtakingly assured piece of mean-streets filmmaking, the film shows the legendary director dropping the bids for industry respectability that have preoccupied him over the past decade and doing what he does best: burrow to the agonized heart of criminality and let the blood and guilt splatter where they may.

Adapted from the 2002 Hong Kong action film "Infernal Affairs" by the Dorchester-born screenwriter William Monahan , "The Departed" is also the closest we've come yet to The Great Boston Movie, a beast that requires more honesty than filmmakers (and audiences) have been willing to grant. The film's only serious flaw is that it establishes a venal and local moral wasteland, crisscrossed by scummy realities of class and race, that it never follows up. What begins as a blood-soaked tragicomedy about our fair town's tribal warfare turns into merely a brilliant B movie. Don't let that keep you away.

"I don't want to be a product of my environment -- I want my environment to be a product of me." So says Frank Costello (Jack Nicholson), the satanic South Boston mobster who could be Whitey Bulger's even more evil twin. Narrating the film's opening passages against a backdrop of news footage of the 1974 anti-busing violence, Costello lays out his version of ethnic realpolitik: "That's what the black chappies never realized. No one gives it to you. You have to take it."

Frank does, however, give a leg up to a starstruck neighborhood kid named Colin Sullivan, whom he grooms for a long-term project: grow up straight, join the police, be my in-house mole. By the time Colin is played by Matt Damon, he's a canny customer on track to department success -- a rising star with the State Police's special investigative unit headed by the glib, hard-driving Ellerby (Alec Baldwin). Their mission: Bring down the Irish mafia in general and Costello in particular. Colin's mission: keep "dad" apprised of any incoming busts.

A separate undercover unit run by Oliver Queenan (Martin Sheen) and his hotheaded deputy Dignam (Mark Wahlberg) recruit their own L Street Brownie: Billy Costigan (Leonardo DiCaprio), a police academy misfit with a crooked family he wants to live down. In short order, Billy is jailed on a cooked-up assault, sent back on the streets, and works his way into Costello's mob as an informer.

That's the snappy mirror gimmick that drove "Infernal Affairs" -- two rats reporting on their compatriots and, increasingly, each other -- and "The Departed" takes the chess match to insanely complex levels. Both groups begin frantically seeking the traitor in their midsts, and when Colin is put in charge of the department search, he grimly realizes that he has to find himself.

At one point Billy stalks his opposite number to a meeting with Costello, and the sequence becomes a sadistic game of now-I-see-me/no-you-don't. Good and bad bleed into each other as these two sons of Southie come to understand they're brothers in battered spirit, and that only the other man can understand what each is going through.

Eventually the plot spins into free fall and the bodies start piling up. You don't mind because Scorsese is so in command of his medium, because the performances are juicy and committed, and because the violence feels viscerally real. When people throw punches in "The Departed," they break their hands; when one character falls several stories to the pavement, the blowback is defiantly unpretty. Costello toys absent - mindedly with an anonymous severed hand before asking an underling to "get rid of this." "The Departed" follows the consequences of bloodshed and betrayal all the way to the ugly end, and you won't feel like celebrating afterward .

Monahan's dialogue is filthy and funny, bristling with tabloid poetry: "Your family's dug into the Southie projects like ticks"; "You're a black guy in Boston -- you don't need my help to be completely [expletive]." The central performances are tremendous, too, and for once the local accents are spot-on (mostly; Sheen's still doing the Kennedys). This is DiCaprio's best work in a long while, and he makes you feel the suicidal craziness of "having to be a different guy every day." Damon's playing a more multi-leveled game, though, and under that mashed pretty-boy face we glimpse a whole spectrum of rat emotion: greed, ambition, cowardice, and a pathetic sort of loyalty.

Wahlberg almost steals the film as a pit bull of a Statie -- every time he shows up you start grinning -- and Nicholson does steal everything that's not nailed down. Frank Costello could be Jack Torrance from "The Shining" given a new lease on life and scraped clean of all human scruple. He's a joyfully vulgar psycho, a creature of pure id. You don't try to understand this guy -- as someone says, quoting Sigmund Freud, the Irish "are the only people impervious to psychoanalysis" -- you just run like hell.

For all the excellence of the performances (which includes Vera Farmiga as a police shrink drawn to both Damon and DiCaprio; her accent's wobbly but the acting's right), this is a director's return to form. When Scorsese misfires here, cueing the Rolling Stones' "Gimme Shelter" on the soundtrack yet again or giving Colin a high-rise apartment with a patently fake view of the State House dome, you're inclined to forgive him. When "The Departed" roars to life, as it does in so many of its scenes, you feel like nobody understands movies -- the delirious highs, the unforgiving moral depths -- as well as this man does. Welcome back, Marty.

Ty Burr can be reached at tburr@globe.com.
Posted by jtf at 6:55 AM