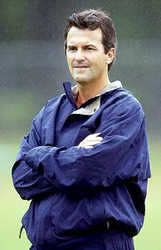 Concluding his remarks before a game against Villanova during the 2003 season, he said, "My thrill during our games is the understanding that every team that leaves the field against us knows they were beaten by a greater force. No, not a better team. They ran into a force. They found the center of our chest and it was hard and they couldn't knock us down. So when you're tackling out there today, I want you to throw your body at the girl with such a clattering of bones and gristle that she'll be worried about having a scar from her kneecap to her ankle. I want her wondering, 'If I finish this game, will I ever be able to wear a skirt again?'"

-From "The Man Watching" by Tim Crothers

It was 1991. Tim Crothers was on assignment for Sports Illustrated to cover some 15-year-old golf prodigy trying to make it on the PGA tour.

"Standing in the parched fairway on the par-5, 18th hole at Los Serranos Country Club in Chino, Calif., last month," Crothers wrote, "Tiger Woods needed a birdie. So, of course, he wanted an eagle. That's Tiger."

Since Crothers, a UNC alumnus and former senior writer at Sports Illustrated, first noticed Woods, media everywhere have clamored for any chance to get at Tiger. Not only was Crothers to make Tiger's story national, but he did it in such detail that few have yet to match.

It was off-beat to cover a teen golf phenom, but that's Crothers' style. After Tiger, Crothers continued his string of new and even unusual stories, such as features on then-still-up-and-coming stars like Tim Duncan, and curiosities like Louis "Red" Klotz, the losingest coach in basketball.

But in 2001, Crothers started the biggest off-beat piece of his career.

Only this time, he sought out an already established, legitimate legend. One who had earned a dominant reputation far before most outside of his sport had ever heard his name. One who would allow Crothers to follow him around for five years to get the most in-depth story possible.
Crothers' book "The Man Watching" is University of North Carolina women's soccer coach Anson Dorrance, captured in his entirety in 352 pages.

"I met Anson when I went to school here in the early '80s," Crothers said. "He has such an interesting personality that he just kind of sticks with you. ... It was enough to put it in the back of my mind that someday it would be fun to find out what makes this guy tick."

The interest in seeking out Dorrance seems logical. Anyone who can produce a list of national, international, conference and individual records that is long enough for six straight pages of a media guide (a list printed in a point size so small it's barely visible to the naked eye) should be applauded. Coaching a team to 18 national titles, 16 ACC Conference Tournament Championships and a winning percentage of .944 is simply unheard of.

But Crothers' book is unlike any other documentary, in print or film, made about Dorrance and his dynastic program. And there have been more than a few.

See, Crothers didn't just "cover" Dorrance and the UNC soccer team. Nope. He practically followed their every movement and welcomed himself into their daily lives like the human stain.
Crothers got to go behind the scenes for more than just the standard 10 minutes allotted to post-game interviews. He got to know Dorrance and his players as people -- their likes, their dislikes, their mannerisms, their quirks.

"Once I started working on it, it was like pulling a thread," Crothers said. "Once you started to pull, it was endless and you could always interview another player. Every time I talked to a player, she would say, 'Oh, well you should talk to so-and-so because she'll have some great stories for you.'"

Before Crothers knew it, he had interviewed 127 players. And those were just the Tar Heels. The number quickly escalated once he added players and coaches at other schools as well as Dorrance's family. The sources for the book total about 200.

"But, honestly, the real reason it took five years (to write) was because it was so freakin' fun," Crothers admitted. "When you've covered pro football, baseball and basketball as much as I did, you start to get jaded about sports and how everyone's just in it for the buck. What I found so refreshing about this, from day one, is that these women just love playing, and maybe more so, they just love hanging out with each other."

For his first six months on the project, Crothers could be found wandering Finley Field watching the team practice every afternoon. Since Dorrance has no qualms about showing off his players' skill or his unbeatable strategy on the field, anyone can watch, and Crothers was just another random face on the sidelines.

Crothers purposely waited until he felt he knew the players and coaches well enough before he hit them with the real, hard-core interviews. After closely observing the team to get a feel for the styles and personalities on the team, Crothers came out of hiding.

"He was just like a part of the team," said former UNC defender Kendall Fletcher. "We kind of accepted him. He was there and he just fit right in."

The practices -- he was on the sidelines.

The pre-game meetings -- he sat in.

The bus trips to and from nearby games -- he sat in the front seat.

The team huddles -- he listened.

And every spare moment that he wasn't with Dorrance and the Tar Heels, he talked to former UNC players, other soccer coaches around the nation and Dorrance's family.

Fletcher went through her four years at UNC with Crothers along every step of the way. She and her teammates were aware of his presence, but they never made an issue of it. Nothing changed.

"For us, a lot of the stuff is just sheer comedy, and I think he captured a lot of that," Dorrance said. "Anytime someone associated with program reads it, they usually end up screaming in laughter because it reminds us of the stuff that goes on in around here."

But the comedy behind the scenes is only part of it.

Dorrance is a complex man. Crothers, although he was taken aback at times while with the Tar Heels, wanted to give the complete picture of Dorrance and his team -- the good and the bad.
An entire chapter is dedicated to Dorrance's "critics" and allegations against him. Life has not been a "never-ending ascension." The story is not sugar-coated. Dorrance's language is not censored.

The content is balanced; it's raw. But it's stocked to the brim with anecdotes.

Like the time current players Heather O'Reilly and Elizabeth Guess came to Dorrance for advice during their first Halloween in Chapel Hill. Or the time Mia Hamm came into Dorrance's office, a nervous wreck in anticipation of her initial goal-setting meeting with her coach, and he provided the motivation that has stuck with her since.

"Anson is one of the most candid people I have ever talked to, and so was everyone else I interviewed," Crothers said. "I'm not very good at cutting my work, and I'll be the first one to admit that this book could be a good 40 pages shorter. But I just couldn't bring myself to take any more out. I probably have two books this size of more anecdotes sitting on the cutting-room floor."

The details are abundant: Dorrance's posture on the sidelines; he has his players run sprints in a "Big V" as a reference to victory; he pronounces "victory" like VIC-tree; he uses trophies as doorstoppers; the way his leather office chair embodies his "Godfather" qualities.

The book hit stores this week and Crothers is scheduled to do a signing at the Bull's Head Bookshop on Oct. 24. Sports Illustrated columnist and author Rick Reilly has raved about it. Southern California football coach Pete Carroll loves it. But above all, Crothers' biggest critic couldn't be more pleased.

"It shares everything," Dorrance said. "Tim spent a lot of time with us. No one has ever studied us in this much depth. He's the only one who has done this."

Email ThisBlogThis!Share to TwitterShare to FacebookShare to Pinterest
Labels: Books and Things, Sports