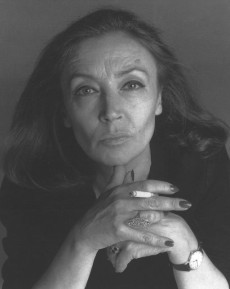 [I did not share her atheistic leanings but Ms. Fallaci was a truly remarkable woman. Fallaci was an extremely courageous individual of rare conviction and insight...her death is a great loss. I certainly shared her assessment of the growing threat of Islam and her books "The Force of Reason" and "The Rage and the Pride" are must reading. - jtf]

ROME, Sept. 15 — Oriana Fallaci, a dissecting interviewer of the powerful and an iconoclastic journalist who became an icon herself, died Friday in her home city of Florence, Italy. She was 77.

Ms. Fallaci, who also had a home in Manhattan, was known to have suffered from cancer for the last decade. Paolo Klun, an official with the RCS publishing group, which carried Ms. Fallaci’s work, told The Associated Press that Ms. Fallaci had gone back to Florence days ago as her condition worsened and that she had died at a private hospital there.

Known in recent years for writing angrily against Islam, Ms. Fallaci became famous in the 1960’s and 70’s for her war journalism and her long, aggressive and revealing interviews with prominent people. She was once described in The Los Angeles Times as “the journalist to whom virtually no world figure would say no.” Among her subjects were Ayatollah Ruhollah Khomeini, the father of the Iranian revolution; Yasir Arafat, the Palestinian leader; Golda Meir, the Israeli prime minister; Indira Gandhi, the longstanding Indian prime minister; Nguyen Van Thieu, the South Vietnamese president during the war years; and Henry Kissinger, President Richard M. Nixon’s secretary of state.

Mr. Kissinger called his experience with Ms. Fallaci “the most disastrous conversation I ever had with any member of the press.” At the height of his power and celebrity in 1972, she had coaxed him to admit that at times he felt like “the cowboy who leads the wagon train by riding ahead alone on his horse, the cowboy who rides all alone into the town.” Mr. Kissinger later wrote in his memoirs that the quotation harmed his relations with Nixon.

A glamorous figure with high cheekbones, a black curl of eyeliner and an ever-present cigarette, she believed that she had the right to ask or say anything, and did so in writings translated into more than 20 languages. In interviews she could be in turn incisive, flattering and blunt, taking her subjects by surprise.

“How do you swim in a chador?” she asked Ayatollah Khomeini in 1979, not long after he came to power in Iran. His reply, she wrote in The New York Times, was that she was not obliged to wear one, because it was a garment for proper Islamic women. She tore off her chador, and Ayatollah Khomeini stalked off.

Her boldness earned her a new generation of admirers — and many detractors — after the attacks of Sept. 11, 2001, prompted her to end years of silence with warnings about Islam. In three books beginning with “The Rage and the Pride” (Rizzoli, 2002) and in many interviews, she sharply criticized not only Islamic extremists but also Islam itself. She accused the West of having become too complacent and tolerant to understand the threat she believed Islam presented.

The “sons of Allah breed like rats,” she wrote, condemning the growing immigration of Muslims in Europe, including her homeland.

“Europe is no longer Europe,” she told The Wall Street Journal in 2005. “It is ‘Eurabia,’ a colony of Islam, where the Islamic invasion does not proceed only in a physical sense, but also in a mental and cultural sense. Servility to the invaders has poisoned democracy, with obvious consequences for the freedom of thought, and for the concept itself of liberty.”

Her warnings endeared her to many conservatives and won her, a lifelong atheist, an audience with Pope Benedict XVI in 2005. But she was also accused of racism, and in Switzerland and Italy she was charged with violating laws against vilifying religion. In 2003, the left-wing Italian newspaper La Repubblica called her an “exhibitionist posing as the Joan of Arc of the West.”
Born June 29, 1929, in Florence, she was made a lookout for the Italian Resistance at the age of 10 by her antifascist father, Edoardo, a cabinet maker. The early brush with danger became a pattern.

As a journalist, she covered wars from Vietnam to Central Asia to South America. In Mexico City in 1968, days before the Summer Olympics were to begin there, she was shot three times, dragged down steps by the hair by soldiers and left for dead in clashes in which several hundred protesters were killed.

“Alas, nothing reveals man the way war does,” she told an interviewer in 2001. “Nothing so accentuates in him the beauty and ugliness, the intelligence and foolishness, the brutishness and humanity, the courage and cowardice, the enigma.’’

But it was her interviews that made her famous and her books staples on college campuses around the world. Never married, she fell in love with one of her subjects, the Greek poet and activist Alekos Panagoulis, who was convicted of trying to assassinate Greece’s military ruler, George Papadapoulos, in 1967. Mr. Panagoulis was killed in 1976 in a car crash that Ms. Fallaci maintained was an assassination. Her novel “A Man” was a barely concealed story of his life.

Her other books included a collection of her interviews, “Interview with History” (1976); “If the Sun Dies” (1966), about the American space program; “Letter to a Child Unborn” (1976), a novel about a single woman’s conversation with a child she aborted; and “The Force of Reason” (2006), on Islam, Europe and the angry reaction to her post-Sept. 11 book “The Rage and the Pride.”

In recent years she was a private and solitary figure, working out of her townhouse on the Upper East Side of Manhattan and visiting Florence and a house she owns in Tuscany. She is survived by a sister, Paola, who was with her when she died, Italian news reports said.
For a woman who relentlessly prodded her interview subjects into self revelation, Ms. Fallaci said she did not like to talk about herself.

Email ThisBlogThis!Share to TwitterShare to FacebookShare to Pinterest
Labels: Islam and The West, Obituaries, Oriana Fallaci