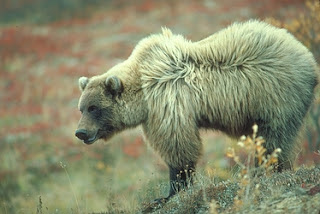 Limited resources to put tracking collars on bears in the Northern Continental Divide Ecosystem has hindered efforts to track how, where and why bears are dying, he said. The number of illegal kills in 2005 was likely higher than the 11 wildlife managers know about, he said.

Since 2004, 21 grizzlies in that part of northwestern Montana were recorded as known illegal kills, but it remains unclear whether that signifies a trend in a region where many people live close to or in bear territory.

Only about 30 of the estimated 500 bears in and near Glacier National Park have radio collars, and Servheen said he'd like to see that number double. The Yellowstone-area grizzly population, which the federal government late last year proposed removing from special protections under the Endangered Species Act, has between 60 and 80 collared bears in any one year, he said.

The cost for capturing, collaring and monitoring a bear, can run an average of $15,000, when factoring in such things as staff time, he said. Higher-tech collars that make use of global positioning to better track the bears can cost $4,100 alone, he said.

In all, 25 grizzlies were killed last year in the Northern Continental Divide Ecosystem, he said. Besides those killed illegally, including one that appeared to have been poisoned, seven grizzlies were killed by wildlife managers after conflicts with people; two were killed in self defense; one was hit by a vehicle and four died as a result of "handling problems," including what may have been a rare, adverse reaction to the drug used in capturing bears, he said.
At least 10 of the 25 bears killed there last year were females.

The consequences of illegal killings may be dire, environmentalists say. They advocate adequate funding not only for improved monitoring of the bears but also to step up law enforcement.

"This is blood that can't be spilled without major consequences," said Louisa Willcox, of the Natural Resources Defense Council.

The Sierra Club's Heidi Godwin agrees, but fears the prospects for more money are slim, particularly on the federal level.

"I think they fight for every dime we currently see spent on wildlife, and that will only get tougher," she said.

Willcox also believes wildlife officials need to improve on existing efforts to reach educate homeowners about ways in which to reduce conflicts with bears.

"The population can't sustain such high losses without a decline," she said. "This should be setting off all sorts of alarm bells."
Posted by jtf at 5:40 PM