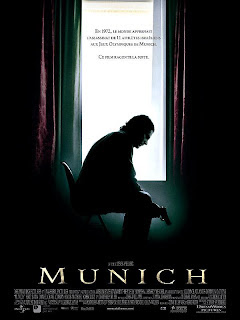 When Steven Spielberg began filming Munich in June 2004, he set the tone for his fictional movie about Israeli agents who hunted down the Palestinian terrorists responsible for the slaughter of Israeli athletes at the 1972 Munich Olympics.
Spielberg abruptly stopped filming and closed up shop. Why? Because the 2004 Summer Games were happening in August, and Steven Spielberg didn’t want to upset the terrorists.

When Spielberg began filming in 2004, it was well known that his film was based on George Jonas’ Vengeance – a book discredited as bunk by both Israeli Mossad agents and Palestinians with actual knowledge of the events depicted. So Spielberg claimed the movie was not based on Vengeance. If it’s not based on the book, then why do the credits of this film say it is?

But not as much as he and admittedly anti-Israel scriptwriter Tony Kushner lied in this two-and-a-half-hour-plus celluloid fairy tale. Like the book on which it’s based, Munich is long, boring, and filled with fakery.

Spielberg’s Golda Meir is unsure about going after the Munich terrorists. She wavers and constantly seeks reassurance that this is the right thing. But the real-life Golda Meir could not have been more certain and intent on killing these terrorists.

Spielberg’s Palestinian terrorists have deals with CIA officials in which they are paid not to harm American diplomats. Real-life Palestinians in 1973 beat to death U.S. diplomats, like Cleo Noel and George Curtis Moore in the Sudan, with Yasser Arafat personally giving the orders. (They were tortured to death and beaten so badly, authorities could not tell which of the two was black and which was white.)

Spielberg’s Mossad agents say bigoted things like, “The only blood that matters to me is Jewish blood,” and go around killing innocent people at whim. The real-life Mossad agents who hunted the Munich terrorists went to great pains to avoid killing innocents (whether or not they were Jewish), a reason it took so many years and financial resources to get all but one of them. (Jamil Al-Gashey lives safely under the protection of the terror-state Syria.) In real-life, they killed only one innocent man whom they mistakenly believed to be a terrorist – a Moroccan waiter in Norway – for which those Mossad agents responsible were tried, convicted, and imprisoned, something that does not happen in the Spielberg version of events. Spielberg’s Mossad agents complain that Israel has no death penalty, so killing the terrorists violates Israeli law. Real-life Israel does have a death penalty for Nazi war criminals, like Eichmann, and recognized that the Munich terrorists were equally worthy.

Spielberg’s Mossad agents cry and brood a lot, unsure of themselves and why they are pursuing terrorists. Been there, seen that before – in the left-wing Israeli film Walk on Water. But it bears little resemblance to the real Mossad agents who hunted the terrorists. They were not metrosexual, sensitive guys – as badly as Spielberg and Kushner would like them to be. Like Golda Meir, they could not have been more certain of the just purpose of their mission.

Then, there is something I haven’t read in other critics’ accounts of Munich – something that made me sick to my stomach. Are the lives of the innocent Israeli athletes so worthless that the scenes in which they are murdered by Palestinian terrorists are interspersed with the self-doubting Mossad agent having sex? How would Steven Spielberg like it if a loved one was shown being bludgeoned in between scenes of a law enforcement official bouncing up and down on top of the agent’s naked wife? This happens twice, the first time with a pregnant woman and a sexual position I thought was reserved for NC-17 and X-rated movies. Thanks for cheapening these murdered athletes’ lives, Spielberg.

From the beginning of this movie, the memories of these innocent victims of terrorism are desecrated, their lives morally equated with Palestinian terrorists’ lives. The work Kushner and Spielberg expended to create this undue symmetry of the asymmetrical is the hardest work they did in the entire film.

What can you expect from the man who said his meeting with Fidel Castro “was the eight most important hours of my life”?

That’s the message of this movie: An eye for an eye doesn’t work. Instead we should just allow our enemies to take out both our eyes, with no end in sight. Israel tried Spielberg’s route, and the country’s experience was just the opposite of Spielberg’s message.

When Israel won the Yom Kippur War, when it hunted down the Olympic terrorists, when it invaded Lebanon and had Yasser Arafat in its sites in Beirut, the world respected Israel – and so did its Islamic enemies. And terrorist attacks stopped or slowed. When Israel showed weakness – signing empty peace treaties, like Oslo; pulling out of Southern Lebanon in an hour; and giving away Gaza – the world disdained Israel, and so did the Palestinian terrorists. That's when the terrorist attacks acceleterated. Many more Israelis have been murdered and maimed in the twelve years after the Oslo accords than in the twelve years before.

In Munich, repeated scenes of the Israeli athletes being taken hostage by the Palestinian terrorists show a poster of Masada in the background at their Olympic quarters. Masada was a famous mountain fortress in Israel, where ancients Jews made their last heroic stand against the Romans. Masada became a symbol of Jewish heroism that inspired the imagination and spirit of the founders of Israel.

But the symbolism of the Masada poster is lost on Spielberg. In his Munich vision of the world, he doesn’t want a heroic last stand against terrorists. He just wants us to roll over and die without a fight.

Steven Spielberg built tremendous political capital with the making of Schindler’s List. But he blew it all on Munich. And he just wrote his epitaph with it.
There are a lot of people named Abu in this film – Abu Youssef, Abu Salameh, etc. But the biggest Abu is the one in the credits, Abu Spielberg – Minister of Disinformation.

Visit Debbie Schlussel's website at DebbieSchlussel.com. She can be reached at dschlussel@yahoo.com.
Posted by jtf at 9:36 PM