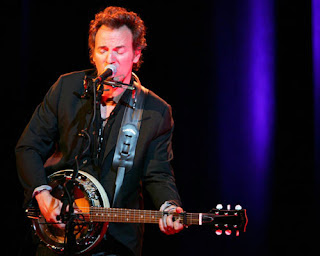 Bruce Springsteen is, to many fans, a religion. His music is their savior, his words their bible. The heft of the E Street Band unleashes the sweaty, passion-charged preacher in him, but this solo acoustic "Devils & Dust" tour liberates the poet.

That was the humble, amiable guy who played to a nearly sold-out crowd of 6,000 at the Richmond Coliseum last night, expos- ing the guts of cherished nuggets such as the opening "My Beautiful Reward" (on pump organ and harmonica) and his newest work, including the Dylan-esque "Silver Palomino" and nonchalantly explicit "Reno."

If the thought of a solo Springsteen sends you racing for the NoDoz, that is understandable this tour isn't designed for the casual fan yearning to scream along to "Born To Run." But regardless of musical preference, it is impossible to deny Springsteen's craftsmanship as a songwriter, communicator and musician, all of which were splayed open for 2½ hours.

Throughout the concert, Springsteen sounded like . . . . Springsteen -- gravelly, but warm, his rough voice turning tender on "The River" and wrung from his throat on "Lonesome Day."
A mainstay in Richmond during the lean years, Springsteen hasn't forgotten those roots, telling the crowd, "We had two places we played -- here and New Jersey. You kept us alive for quite a while."

He also joked freely about playing the piano in front of resident piano virtuoso Bruce Hornsby, who watched his buddy from the second row.

"Better look over your shoulder, Hornsby. Fear for your day job, brother," Springsteen said with a huge grin during a mid-song breakdown of the rollicking "You Can Look (But You Better Not Touch)."

Springsteen might not be Hornsby-level on the ivories, but he's no slouch, either, evidenced on "Incident on 57th Street," a request played with a power unexpected from one man behind a piano. That song, like so many in his catalog, perfectly represents Springsteen's mass appeal -- the guys embrace his ruggedness, and the women pretend he's singing to them in his husky, meaningful voice.

During this tour, which launched this spring after the release of the sparse "Devils & Dust" album, Springsteen has asked for quiet from the audience, mostly, as he has remarked in the past, so he can remember the lyrics. It's a shame that such a request even needs to be made, given the atmosphere of the concert. But, as evidenced by one overzealous fan in the front row who was eventually ejected for his disruptive clapping and yelling during songs, some people never learn. Really, is it that much of a thrill to have your idol glare at you and say, "Sir, have you ingested any drugs before you came down? You're scaring me."

But the rest of the respectful crowd (those obligatory intonations of "Bruuuuuuuuuuce!" don't really count) were treated to their own version of VH1's "Storytellers."

The bare stage in this half-house configuration was decorated with two hovering chandeliers and layers of drapes, proving the ideal setting for this type of show. Tasteful lighting accompanied "The New Timer," as Springsteen strummed an autoharp, while his nimble guitar playing on "The Rising" was illuminated by a single white spotlight, which somehow helped the song retain its anthemic strength.

By the time he wound down with the ethereal "Dream Baby Dream," there was no questioning that Springsteen had brought his scripture -- and that his followers left enraptured.