Groups Split Over Risks to Grizzlies in Yellowstone Park 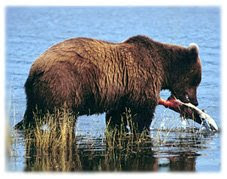 By Blaine Harden
The Washington Post
Monday, August 8, 2005; A08
http://www.washingtonpost.com

MISSOULA, Mont. -- As the Bush administration prepares to remove Yellowstone's grizzly bears from the endangered species list, a schism has emerged in the environmental movement over whether the bears remain at risk.

The nation's largest environmental group, the National Wildlife Federation, says it now supports delisting the bears, whose numbers have bounced back impressively after three decades of federal protection.

But a number of powerful organizations, including the Sierra Club, the Natural Resources Defense Council and Earthjustice, say that the future of the grizzlies is still in doubt. They are threatening to sue the Bush administration if, as expected, it removes Yellowstone grizzlies from the list.

"The recovery has been a huge success, but removing federal protection now is too risky," said Heidi Godwin, regional representative for the Sierra Club in Montana. "You don't go from emergency room to the parking lot. The bears still need intensive care."

Big, omnivorous and photogenic, grizzlies are often called "charismatic mega-fauna." They are attention-grabbing, money-raising, vote-swaying icons for the environmental movement, and a significant split inside the movement's ranks about how best to protect them has not occurred before.

The National Wildlife Federation, though, says it is time for environmentalists to rethink how to manage Yellowstone's grizzlies -- both as a matter of science and as a political tactic in an era of Republican rule.

"We think we should embrace success when it happens," said Sterling D. Miller, a grizzly bear specialist and senior wildlife biologist here in the federation's Northern Rockies office. "If we don't, we play right into the hands of the people who are trying to kill the Endangered Species Act by reforming it."

A draft proposal to take the grizzlies off the endangered species list went out this summer from field offices of the U.S. Fish and Wildlife Service in Montana to Interior Department headquarters, said Chris Servheen, grizzly bear recovery coordinator for Fish and Wildlife.

Senior officials at Interior are reviewing the plan, Servheen said, adding that it is likely the proposal will soon be published in the Federal Register and then be made available for public comment. A spokesman for Interior cautioned that it is "too early" to comment on what the department would do with the proposal.

The delisting plan reaches Washington as the White House, Republicans in Congress, land rights groups and many industry lobbyists are pressing to limit the scope and power of the Endangered Species Act, which was enacted in 1973 and which many conservatives scorn as costly, clumsy and ineffective.

Given this political reality, officials from the National Wildlife Federation say they have concluded that the long effort to rescue grizzlies in and around Yellowstone National Park should be publicized for what it is: a resounding success and a perfect example of how the Endangered Species Act can work.

When grizzlies were listed as threatened in 1975, there were about 200 to 250 of them in the Yellowstone area. Now their population is estimated to be about 600, with their numbers growing at about 4 to 7 percent a year, according to the Fish and Wildlife Service.

"The public should understand that the Endangered Species Act is not an overnight cure," said Thomas M. France, director and counsel for the federation's Northern Rockies office. "But you will have success when there is proper funding and real cooperation. What has happened with the grizzlies is a model for how to take an animal off the list."

France said that the states of Montana, Wyoming and Idaho -- working with federal agencies -- are now well prepared to guarantee the long-term health of the grizzlies that live near Yellowstone. The plan for delisting would apply only to Yellowstone's grizzlies and not to other clusters of the species in the West that are still believed to be at risk.

If the Yellowstone grizzlies are delisted, a Forest Service protection plan will be implemented in six national forests that surround the national park, Servheen said. He said the plan would sharply limit road building, camping, and oil and gas exploration in the forests, while retiring existing leases for livestock grazing.

The grizzlies would continue to be monitored by federal scientists, with 10 percent of the bears always wearing radio collars. "They would be fairly intensively taken care of from now on," Servheen said.

Officials from several environmental organizations, however, said they do not trust the White House to follow through on these promised protections.

"The Bush administration has tried to gut forest management plans, and yet the primary enforcement mechanism for protecting these bears is through forest plans," said Douglas Honnold, managing attorney for the Northern Rockies office of Earthjustice.

He said Yellowstone grizzlies still represent a relatively small genetic pool that remains cut off from grizzlies in central Idaho and Glacier National Park in northwest Montana. Until these separated clusters of bears can be reconnected through a system of land corridors, Honnold said, it is much too early to delist the grizzlies.

Speaking for the Sierra Club, Godwin said that grizzly delisting has caused a split among environmentalists.

"Call what is red, red," she said. "The potential is definitely there for this to cause some contention."