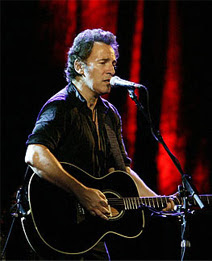 It's a tall order to make the cavernous Bradley Center feel intimate.

But despite the questionable venue, Bruce Springsteen's solo, not-quite-acoustic concert Sunday night was a showcase for the icon's formidable musical talents and charm.

Black curtains draped ceiling to floor behind the stage made the 20,000-seat venue seem roughly a third of its size, and a crystalline mix assured excellent sound for the near-capacity crowd, but the venue still felt too large and impersonal for two hours of Springsteen's most riveting musical character studies.

Tales of sin, the struggle to survive and, occasionally, redemption, flowed out from the stage throughout the set, beginning with opening tune "Shut Out the Light" and carrying through to the encores, which included "Does This Bus Stop at 82nd St.?" and "The Promised Land."

While some may prefer Springsteen's other incarnation, as the rabble-rousing ringleader of the E Street Circus, Sunday's performance was an arguably stronger testament to his skills as both musician and storyteller of a thousand nuances.

Moving without pause among guitar, harmonica, organ and piano, Springsteen re-imagined several of the songs on the set list, such as "The Rising," which he performed with raw urgency.
"Jesus Was an Only Son," from this year's spare and brilliant "Devils & Dust," evoked far more emotion and humanity than all the cinematic blood-splatter of "The Passion of the Christ."

The parent-child relationship was a common theme throughout the evening. Describing his teenage son bringing home his first girlfriend, Springsteen revealed he wasn't a hovering kind of dad. Well, sorta.

Quipped the singer: "You can't stand around and watch 'em, it's not a zoo. So I hid behind a bush."