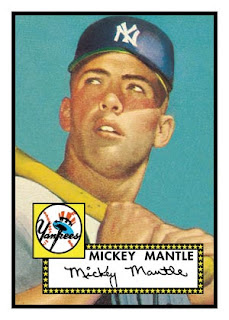 With "Mantle," HBO Sports has produced the ultimate portrait of baseball's most tragic figure: the fair-haired American icon who was larger than life for a generation of fans but who never fully understood why he was so adored.

"He'd wonder, 'Why did they love me so much? I just played bleepin' baseball,'" sportswriter Skip Bayless recalls in the hour-long documentary that debuts Wednesday, July 13.

The enduring legacy of the Yankees star, of course, is much deeper than "bleepin' baseball," and "Mantle" explores the complex emotional maelstrom that swirled around him.

Much of Mantle's allure is familiar territory to a boy who was raised here in that golden age and understands what he meant to fans. Former Newsday sportswriter Marty Noble describes it in "Mantle" as "completely myopic hero worship" and WFAN's Mike Francesa notes, "There's a part of him that you carry with you your whole life."

But the exhaustive research - more than three dozen interviews and a bat rack full of footage and still photographs, all skillfully edited - lifts "Mantle" to another level and makes it resonate.

Above the subtle blend of dobro, guitar and fiddle, Mantle's relatives - including his wife, Merlyn - and childhood friends trace his upbringing in Commerce, Okla., through his painful demise due to liver problems and cancer.

Near the rusted metal barn where Mutt Mantle pitched to his son after school, cousin Max Mantle recalls Mickey's obsession with the game. Mickey's brother Ray recalls a day-long family trip to St. Louis to see the Cardinals - the first big-league game that Mickey saw - with Mutt never driving more than 35 miles an hour.

The memories are supplemented with previously unseen images from the family's private collection: Dust Bowl chronicles of Mutt's job in the deadly zinc mines to backyard football games between Mickey and his young sons in Dallas to blurry shots of the teenagers, beers in hand, partying with their father, because that was the easiest way to relate to their alcoholic dad. To someone versed only in Mantle's stats, these are telling images.

Mantle's athleticism and on-field accomplishments from the minors to the Bronx are adeptly chronicled in testimonials from former teammates ("He didn't need steroids," former teammate Johnny Blanchard said. "We didn't even know how to spell it back then") and sports commentators and celebrities such as Bob Costas and Billy Crystal, who have become touchstones for any Mantle-related endeavor.

They also remind us that Mantle, hounded by expectations as Joe DiMaggio's successor and driven by fear of an early death in a family shadowed by Hodgkin's disease, veered toward an out-of-control lifestyle. Blanchard recalls watching "The Honeymooners" with Mantle in the St. Moritz Hotel in the early 1950s when Mantle asked, "Hey Blanch, you ever think about dying?"

In the name of dignity, some off-the-field stories remain buried off-screen; former pitcher Whitey Ford declines to revisit some of the ribald antics that sportswriters of the time recall.

Yogi Berra confesses that he used to leave his smoking-and-drinking teammates at 11 p.m. because he had to catch the next day. Billy Martin Jr., the son of the pugnacious extrovert who was the carousing ringleader of the Yankees, remembers a harrowing late-night journey along the ledge of a Cleveland hotel by Mantle and Martin Sr. in an attempt to spy on a teammate's tryst in another room. Photos of a hung-over and beer-glazed Mantle, in uniform, suffice to illustrate the extent of the deterioration.

The immensely sad journey of "Mantle" continues with only one upturn: the peace that he felt during his final 18 months, reconciling his life with himself and his family and becoming a courageous figure for a second time, speaking out against alcoholism and promoting organ donations.

No games are played the night after the All-Star Game. It's a time for fans and players to reflect on the past and reassess the future.

Surely it's no coincidence that "Mantle" debuts that night at 9.