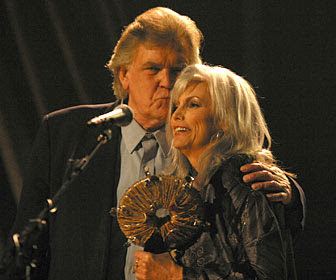 Guy Clark and Emmylou Harris at the 2005 Americana Awards

Her summer projects include an album of duets with Dire Straits guitarist Mark Knopfler, songwriting sessions with Canadian folk artists Kate and Anna McGarrigle and a co-headlining tour with British rocker Elvis Costello - on which they'll harmonize on classic country tunes between solo sets.

She and John Prine sing together on the upcoming release by Rodney Crowell, Harris' longtime friend and collaborator.

"There are all these really interesting, exciting and inspiring projects. It's not just going and playing Branson - it's like really great stuff. If you had one of those in your career, it'd be pretty great."

Harris pauses and rephrases herself, eager to avoid insulting the folks in Branson, the Missouri town that battles the stereotype of being a country music retirement home.

"I use Branson as a metaphor for 'OK, your creative days are over. So let's just make it easy on ourselves,' she explains carefully.

"It's like retiring and going to Florida to just play golf. I love baseball, and I could be very happy just watching baseball for the rest of my life, so I understand that kind of passion. But I think you have to keep yourself involved, enthusiastic and excited about things. And I think it would be hard to stay excited about music in Branson, because I've played there. And for the audience, you were just one more ride in the amusement park between all-you-can-eat buffets."
Posted by jtf at 3:28 PM