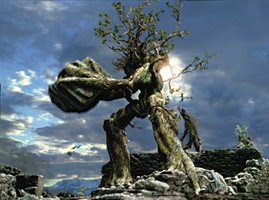 [Forget what the Peloponnesians would do...now we're on to something...what would the hobbits do? - jtf]

The Ents of Europe
Strange rumblings on the continent.

One of the many wondrous peoples that poured forth from the rich imagination of the late J. R. R. Tolkien were the Ents. These tree-like creatures, agonizingly slow and covered with mossy bark, nursed themselves on tales of past glory while their numbers dwindled in their isolation. Unable to reproduce themselves or to fathom the evil outside their peaceful forest — and careful to keep to themselves and avoid reacting to provocation of the tree-cutters and forest burners — they assumed they would be given a pass from the upheavals of Middle Earth.

But with the sudden arrival of two volatile hobbits, the nearby evils of timber-cutting, industrial devilry, and mass murder became too much for the Ents to stomach. They finally "wake up" (literally). Then they go on the offensive — and are amazed at the power they still wield in destroying Saruman's empire.

For Tolkien, who wrote in a post-imperial Britain bled white from stopping Prussian militarism and Hitler's Nazism, only to then witness the rise of the more numerous, wealthier, and crasser Americans, such specters were haunting. Indeed, there are variants of the Ent theme throughout Tolkien's novels, from the dormant Riders of Rohan — whose king was exorcised from his dotage and rallied the realm's dwindling cavalry to recover lost glory and save the West — to the hobbits themselves.

The latter, protected by slurred "Rangers," live blissfully unaware that radical changes in the world have brought evil incarnate to their very doorstep. Then to their amazement they discover that of all people, a hobbit rises to the occasion, and really does stand up well when confronted with apparently far more powerful and evil adversaries. The entire novel is full of such folk — the oath-breaking Dead who come alive to honor their once-broken pact, or the now-fallen and impotent High Elves who nevertheless do their part in the inevitable war to come.

Tolkien always denied an allegorical motif or any allusions to the contemporary dangers of appeasement or the leveling effects of modernism. And scholars bicker over whether he was lamenting the end of the old England, old Europe, or the old West — in the face of the American democratic colossus, the Soviet Union's tentacles, or the un-chivalrous age of the bomb. But the notion of decline, past glory, and 11th-hour reawakening are nevertheless everywhere in the English philologist's Lord of the Rings. Was he on to something?

More specifically, does the Ents analogy work for present-day Europe? Before you laugh at the silly comparison, remember that the Western military tradition is European. Today the continent is unarmed and weak, but deep within its collective mind and spirit still reside the ability to field technologically sophisticated and highly disciplined forces — if it were ever to really feel threatened. One murder began to arouse the Dutch; what would 3,000 dead and a toppled Eiffel Tower do to the French? Or how would the Italians take to a plane stuck into the dome of St. Peter? We are nursed now on the spectacle of Iranian mullahs, with their bought weapons and foreign-produced oil wealth, humiliating a convoy of European delegates begging and cajoling them not to make bombs — or at least to point what bombs they make at Israel and not at Berlin or Paris. But it was not always the case, and may not always be.

The Netherlands was a litmus test for Europe. Unlike Spain or Greece, which had historical grievances against Islam, the Dutch were the avatars of the new liberal Europe, without historical baggage. They were eager to unshackle Europe from the Church, from its class and gender constraints, and from any whiff of its racist or colonialist past. True, for a variety of reasons, Amsterdam may be a case study of how wrong Rousseau was about natural man, but for a Muslim immigrant the country was about as hospitable a foreign host as one can imagine.

Thus, it was far safer for radical Islamic fascists to damn the West openly from a mosque in Rotterdam than for a moderate Christian to quietly worship in a church in Saudi Arabia, Iran, or Algeria. And yet we learn not just that the Netherlands has fostered a radical sect of Muslims who will kill and bomb, but, far more importantly, that they will do so after years of residency among, and indeed in utter contempt of, their Western hosts.

Things are no less humiliating — or dangerous — in France. Thousands of unassimilated Muslims mock French society. Yet their fury shapes its foreign policy to the degree that Jacques Chirac sent a government plane to sweep up a dying Arafat. But then what do we expect from a country that enriched Hamas, let Mrs. Arafat spend her husband's embezzled millions under its nose, gave Khomeini the sanctuary needed to destroy Iran, sold a nuclear reactor to Saddam, is at the heart of the Oil-for-Food scandal, and revs up the Muslim world against the United States?

Only now are Europeans discovering the disturbing nature of radical Islamic extremism, which thrives not on real grievance but on perceived hurts — and the appeasement of its purported oppressors. How odd that tens of millions of Muslims flocked to Europe for its material consumption, superior standard of living, and freedom and tolerance — and then chose not merely to remain in enclaves but to romanticize all the old pathologies that they had fled from in the first place. It is almost as if the killers in Amsterdam said, "I want your cell phones, unfettered Internet access, and free-spirited girls, but hate the very system that alone can create them all. So please let me stay here to destroy what I want."

Turkey's proposed entry into the EU has become some weird sort of Swiftian satire on the crazy relationship between Europe and Islam. Ponder the contradictions of it all. Privately most Europeans realize that opening its borders without restraint to Turkey's millions will alter the nature of the EU, both by welcoming in a radically different citizenry, largely outside the borders of Europe, whose population will make it the largest and poorest country in the Union — and the most antithetical to Western liberalism. Yet Europe is also trapped in its own utopian race/class/gender rhetoric. It cannot openly question the wisdom of making the "other" coequal to itself, since one does not by any abstract standard judge, much less censure, customs, religions, or values.

So it stews and simmers. Not to be outdone, some in Turkey dare the Europeans, almost in contempt, to reject their bid. Thus rather than evolving Attaturk's modernist reforms to match the values of Europe, the country is instead driven into the midst of an Islamic reactionary revival in which its rural east far more resembles Iraq or Iran than Brussels. So the world wonders whether Europe is sticking a toe into the Islamic Middle East or the latter its entire leg into Europe.

Everyone gets in on the charade. The savvy Greeks discovered that they didn't want to be tarred with the usual anti-Ottoman obstructionism and so are keeping very quiet about their historic worries (legitimate after a near 400-year occupation) as a front-line state. And why not, when EU money pouring into Turkey might jumpstart the Eastern Mediterranean economy and lead to joint Greek-Turkish deals? With the future role of NATO and the 6th Fleet undetermined, is it not better to have the Turkish military inside the tent than for poor Greece to have a neighbor's ships and planes routinely violating Hellenic air and sea sovereignty — while it waits for the Danish air force or the French army to provide a little deterrence in the Aegean or Cyprus?

Of course, we are amused by the spectacle. Privately, most Americans grasp that with a Germany and France reeling from unassimilated Muslim populations, a rising Islamic-inspired and globally embarrassing anti-Semitism, and economic stagnation, it is foolhardy to create 70 million Turkish Europeans by fiat. Welcoming in Turkey will make the EU so diverse, large, and unwieldy as to make it — to paraphrase Voltaire — neither European nor a Union. Surely Morocco, Algeria, and Tunisia will wish to get in on the largess. Were they not, after all, also part of the historical Roman mare nostrum, and did they not also enjoy long ties with France and Italy?

So, to our discredit I suppose, we are enjoying schadenfreud after our recent transatlantic acrimonies: Europe preached a postmodern gospel of multiculturalism and the end of oppressive Western values, and now it is time to put its money (and security) where its mouth is — or suffer the usual hypocrisy that all limousine liberals face. The United States has its own recent grievances with the Turks — its eleventh-hour refusal to allow American troops to come down from the north explains why the now red-hot Sunni Triangle never saw much war during the three-week fighting. Recently a minister of a country that gave rise to the notion of 20th-century genocide slurred the United States for resembling Hitler, who in fact was an erstwhile Turkish near ally. Still, our realists muse, how convenient that Europe may carry the water in bringing Turkey inside the Western orbit and prevent it from joining the radical Islamic fringe. Knowing it is in our interest (and not necessarily in the Europeans') and will cost them lots and us nothing, we "on principle" remonstrate for the need to show Western empathy to Turkish aspirations.

But gut-check time is coming for Europe, with its own rising unassimilated immigrant populations, rogue mosques entirely bent on destroying the West, declining birth rate and rising entitlements, the Turkish question, and a foreign policy whose appeasement of Arab regimes won it only a brief lull and plenty of humiliation. The radical Muslim world of the madrassas hates the United States because it is liberal and powerful; but it utterly despises Europe because it is even more liberal and far weaker, earning the continent not fear, but contempt.

The real question is whether there is any Demosthenes left in Europe, who will soberly but firmly demand assimilation and integration of all immigrants, an end to mosque radicalism, even-handedness in the Middle East, no more subsidies to terrorists like Hamas, a toughness rather than opportunist profiteering with the likes of Assad and the Iranian theocracy — and make it clear that states that aid and abet terrorists in Europe due so to their great peril.

So will the old Ents awaken, or will they slumber on, muttering nonsense to themselves, lost in past grandeur and utterly clueless about the dangers on their borders?

Stay tuned — it is one of the most fascinating sagas of our time.

— Victor Davis Hanson is a military historian and a senior fellow at the Hoover Institution at Stanford University. His website is victorhanson.com.
Posted by jtf at 12:40 PM