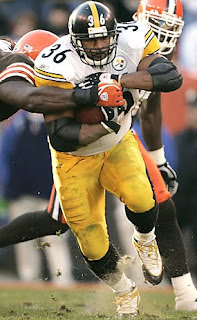 "I'm never going to do anything to be disruptive to these guys," Jerome Bettis said last week, looking around the Steelers' locker room. "At the end of the day, it's not about me. It's about the team winning."

So Bettis will step back quietly from the spotlight in Jacksonville tonight and make room for Duce Staley to shine.

It can't be easy for Bettis. You could make a strong argument he should continue as the Steelers' featured running back. Filling in for the injured Staley the past four games, he was the highlight of the offense, running for more than 100 yards in each of the four wins. Opposing tacklers agreed he is running as hard and as effectively now, at 32, as he ever did. That was especially true the past two games when receiver Plaxico Burress was out and the passing game took a fall. "Basically," Hines Ward said, "Jerome won those ballgames for us."

Along the way, Bettis climbed to No. 5 on the NFL's all-time rushing list behind Emmitt Smith, Walter Payton, Barry Sanders and Eric Dickerson. He almost certainly will get the 37 yards he needs to reach 13,000 -- he's expected to split time against the Jaguars tonight as the Steelers gradually work Staley back -- but he probably won't get the 297 he needs to pass Dickerson if Staley stays healthy and productive.

"I'll say it again: It's not about personal success. It's about team goals," said Bettis, who desperately wants a Super Bowl ring to complete his marvelous career and firmly believes he's on the team that can do it.

Bill Cowher is right to go back to Staley for three reasons.

One, Staley is a superb running back. He had four 100-yard games in the five games before his hamstring injury and would have had five if not for a holding penalty against Ward in Dallas. His 4.7-yards-per-carry average is impossible to ignore. Bettis is averaging 3.5 yards per carry.

Two, Staley is the Steelers' future. Cowher has to go back to him for the same reason he stuck with Ben Roethlisberger after Tommy Maddox was healthy. Bettis said it's only "50-50" that he will play next season. He said he's not sure he wants to put his body through the grind of another offseason, getting ready. He talked about getting married and raising a family.

And three, there are the egos involved. At this stage of his career, Bettis can handle being in the background, waiting to be called on if necessary and, at the very least, scoring the touchdowns in the Steelers' goal-line offense. Heck, he swallowed his pride and didn't gripe last season when Cowher -- presumably to his regret after a nightmarish 6-10 season -- made the forgettable Amos Zereoue the starting running back. The guess here is Staley wouldn't handle a subservient role so easily. Not after he was signed as a free agent with the promise he would be the guy. That's no knock at Staley. Maybe no player is as selfless as Bettis.

"We have a great relationship. I think that's why he didn't try to rush back too soon from his injury and risk being hurt again and maybe being lost for the season. He knew the job was going to be waiting for him so he could afford to get totally healthy. That's only going to benefit our team."

That attitude -- that team-first approach -- is why Bettis is, unquestionably, the most respected player in the Steelers' locker room.

"He is the Pittsburgh Steelers," Ward said. "What a role model for the rest of us.

"I'm sure some of the younger guys feel like they could be doing more. Even me, as a veteran, I know I could be complaining that I want more catches. But we're 10-1. Who wants to do anything to hurt the team? All of us have to understand our roles. If you see Jerome out front accepting his role and not complaining about it, then none of the rest of have any right to complain."

If this is Bettis' final season, they'll be calling him a Hall of Famer in five years, the instant he's eligible for induction.

For now, though, the best description of Bettis comes from Steelers first-year offensive coordinator Ken Whisenhunt, who is earning recognition around the NFL as a brilliant young coach, in large part, because of Bettis' performance.