WHAT HAPPENED TO JEFFREY EPSTEIN? 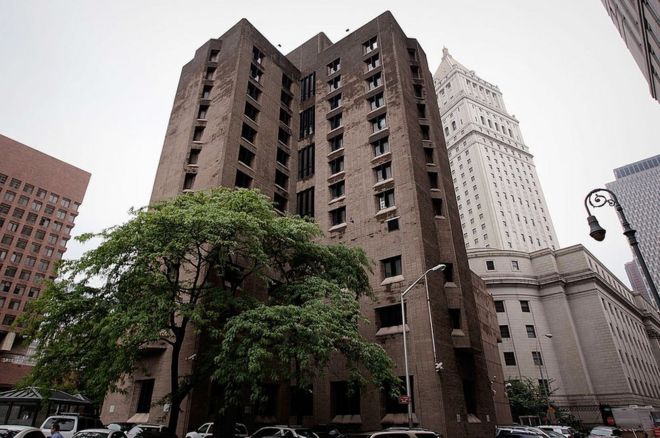 New York City’s Civic Center is a maze of courts, prisons, and offices that begins where Chinatown ends; past relics like a 17th century Jewish cemetery and an 1819 seaman’s church. Park Row is barricaded and blocked off by the brutalist infrastructure of One Police Plaza (which contains the remnants of a British prison used to house American prisoners during the Revolutionary War). Surrounding it are massive federal courthouses in front of whose facades the various important malefactors you see on the evening news are photographed, followed by the neoclassical façade of the New York County Supreme Court.
The placement of these buildings in what used to be the Five Points, New York City’s worst and most violent criminal slum run by gangs who made their own laws, where police never ventured, is not an accident. Nor is it an accident that these buildings blocked off the slum area from nearby Wall Street.
The massive gray and brown towers of Civic Center make a statement about the might of the law.
The Metropolitan Correctional Center is the most obscure of the Civic Center buildings (except to its inmates and their families), its brutalist mass huddling in a blockaded zone, even as it has housed countless famous inmates from John Gotti to Bernie Madoff, from the Blind Sheikh to El Chapo.
New York’s Alcatraz skyscraper has hosted some of the most dangerous and infamous criminals in the world, and its security is as painfully tight as its slitted windows. MCC inmates are bound for one of the federal courts in Civic Center. Some of them will testify. Many only reluctantly. And some of them will be the targets of international gangs, terror groups and crime families who don’t want them testifying.
Somebody did not want the inmate in a cell on one of the top floors of the MCC testifying, even though the job of MCC personnel isn’t just to lock them up, but to keep them from dying. Before Jeffrey Epstein, Mafia kingpins, drug lords and terrorists had come and gone. A helicopter rescue operation had failed.
And then Epstein had somehow managed to impossibly hang himself in his cell.
Epstein was in MCC’s Special Housing Unit. A former warden described the security in SHU or the “hole” or “box” as only second to those of supermax prisons. Inmates eat and shower in their cells. Their hands are cuffed behind their backs whenever they step outside. No objects that can be used to harm anyone fall into their hands. They’re not allowed to make physical contact with even their own lawyers.
According to a former MCC inmate, suicide watch inmates are supposed to wear straitjackets. The sheets are paper thin, the ceiling is 9 feet high and there’s nothing to attach a rope to.
But Jeffrey Epstein has a long history of being able to do what he wasn’t allowed to do in prison.
Instead of going to prison, after his original conviction, he spent time in the Palm Beach Stockade, checking himself out to go to his office, where he hired Palm Beach Sheriff’s Deputies to act as his security, referring to him as client, and keeping watch as women and girls went into his office.
"I am authorizing that his cell door be left unlocked," a county supervisor had written back in Florida.
In MCC, someone had authorized that Epstein be left alone in his cell while he died.
MCC was supposed to be different. After suborning the justice systems of Florida, New Mexico, and New York, not to mention the Federal system, he was finally going to get what was coming to him.
And he did. Just not by way of the justice system.

(New York State of Division of Criminal Justice/EPA)
If you believe the official story, the night Jeffrey managed to hang his body in a cell designed to prevent any of the prisoners from doing that, his fellow inmate was removed, in CNN’s words, “for reasons unknown”, and the guards weren’t monitoring him every 30 minutes as they were supposed to.
For reasons unknown.
Despite allegedly trying to commit suicide a few weeks ago, he was taken off suicide watch, again, where he would have been monitored in a special cell every 15 minutes for… reasons unknown.
Reasons unknown ought to be Epstein’s epitaph. He wasn’t prosecuted by Florida or the Feds for raping numerous girls for reasons unknown. The signatures that allowed him to leave prison whenever he wanted to are wrong for reasons unknown. Three states failed to register him as a level 3 sex offender for reasons unknown. And now, security in New York’s Alcatraz failed… for reasons unknown.
Except we do know the reasons.
Jeffrey Epstein enjoyed a vast amount of influence and discretion because of his connections. Wealthy men and women have gone to prison and even passed through MCC before. Epstein’s money and influence both came from sources that have yet to be sufficiently nailed down. And now never will be.
Isn’t that convenient?
But don’t worry. There will be investigations. In Palm Beach, Sheriff Ric Bradshaw, has promised to investigate how Epstein was able to use his stockade as a hotel and his deputies as private security even though the logs have been destroyed.
There are investigations in New York City and you can bet they’ll be every bit as thorough and useless.
And they will include some variation of, “For reasons unknown.”
Epstein’s death was perfectly timed. His death ends the trial and buries all the remaining grand jury evidence in a file cabinet somewhere in Civic Center. And good luck ever getting to that cabinet.
Various authorities have promised to dig into the circumstances of his death and his crimes. But with Epstein gone, there will be no legal limits on them and no way to know where the truth lies. They can and will be able to present whatever claims and documents they like to the public. The lawyers for the victims will work to recover funds from the estate. But the truth has passed beyond recovery.
The truth died on the top of a prison skyscraper whose administration and guards flagrantly violated their own rules, removing Epstein from suicide watch six days after a supposed suicide attempt, leaving him alone in his cell, and failing to check on him until it was too late. Blame will be passed around. Conspiracy theorists will cash in on it for years. And the questions will remain unanswered.
Who could possibly penetrate Manhattan’s most secure detention facility? Who had the political influence to manipulate events within MCC’s walls? Who could do what Chapo’s confederates couldn’t?
These questions join others, such as who in the DOJ had allegedly told Alexander Acosta that Epstein was protected by intelligence figures, and who had corrupted the justice systems of three states?
The answers are gone, but the damage to our political system will linger.
What little we can know is that Epstein’s political connections extended far beyond Palm Beach. At the height of his power, Epstein enjoyed the patronage of figures in the federal government. And now, when he had been brought down in an attack on a federal official, he died in federal custody.
Epstein had become collateral damage in an attempt to inflict glancing harm on President Trump. The campaign failed to accomplish much of anything, but it got Epstein on track to an actual trial.
A trial that will never happen now.
Someone at the federal level had protected Epstein. And someone at the federal level may have decided that he was better off dead. It would have taken a political network with access to career officials in the DOJ to have protected and killed Epstein. We only know of one political network within the federal government linked to a political family closely tied to Jeffrey Epstein. Their name begins with a C.
But that’s speculation.
The Clinton network has faded since its main two figures lost any hope of running the government. And there are other networks whose key figures aren’t as famous or easy to name and define.
The swamp is deep and dark. And there are creatures lurking within it whom very few know.
Perhaps Jeffrey Epstein did die by his own hand. And a chain of coincidences enabled it to happen.
Anyone can come up with conspiracy theories. But there is no escaping the fact that Epstein’s career was one long conspiracy of mysterious money, a private island, the subversion of justice systems in three states, and the federal system, followed by a death that should have been impossible.
A corrupt system enabled Jeffrey Epstein to abuse numerous girls. And now a corrupt system, somewhere in the shadowy maze of Civic Center, has drawn a final curtain over his death.
If you stand in an alley looking up at the dingy walls of the MCC, you can peer through the tiny black slits of its windows looking for answers. But the only thing behind the MCC’s windows is darkness.
Posted by jtf at 6:34 AM