It’s masculinity to the rescue 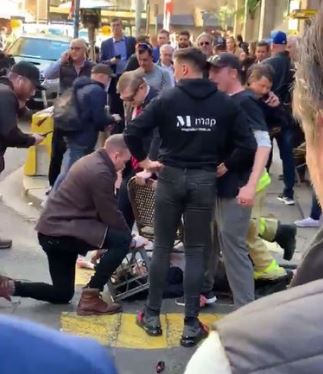 Mert Ney is held down by passersby after his stabbing spree in Sydney, Australia


When a knife-wielding killer went on a bloody rampage through the streets of Sydney, Australia,this week, he was stopped in his tracks by a group of courageous men using just a milk crate and a chair.
Brandishing a butcher’s knife and yelling “Allahu Akbar,” 21-year-old Mert Ney already had allegedly murdered one woman and stabbed another in the back when six men armed themselves with weapons, ranging from a café chair to a firefighter’s ax, and chased him down.
With the killer pinned to the ground, one of the men yelled at him in outrage over his violence against women: “You’re a piece of . . . You stabbed a chick, mate.”
In every story of bloodshed and mayhem, it’s the same. Tales of selfless male heroism and chivalry emerge in the face of mortal danger.
These are men who rush toward danger, risking their lives and even dying in the noble cause of protecting women and children.
We saw it in the El Paso and Dayton massacres. There was David Johnson, 63, who pushed his wife and 9-year-old granddaughter to safety under a counter at the El Paso Walmart before he was fatally shot.
There was bar bouncer Jeremy Ganger, who stood his ground at the front door of the Dayton bar Ned Peppers, reportedly pulling people inside as they fled from the shooter who was firing an AR-15 and wearing body armor. Ganger suffered a shrapnel leg wound.
And, of course, there was the extraordinary bravery and competence of the Dayton cops. We saw them in footage released this week, running toward the shooter when the logical response was to race in the opposite direction. Guns drawn, they shot the killer dead in all of 32 seconds.
Or take 21-year-old Riley Howell, who charged at a gunman shooting up his classroom at the University of North Carolina Charlotte, in April and managed to knock him to the ground. Howell was killed but his heroic act saved the lives of up to 30 classmates.
We always are quick to point to the dark side of masculinity when violence is committed, but too often we overlook the feats of bravery by men who combat it.
Call it the chivalry instinct, it is what inspires men to run toward danger to protect the weak.
This is the noble side of masculinity that we once would perpetuate in folklore and stories passed down from father to son about what it means to be a real man.
But in the new era of “toxic masculinity,” young men are taught to ignore their heroic instincts and learn to be weak. They are instructed always to be on guard against the monster within.
Shaving-products company Gillette’s “toxic masculinity” campaign is a case in point. Whereas the razor maker used to celebrate the bond between fathers and sons, its new woke advertising is all about showcasing bad male behavior — such travesties as men standing behind BBQs or little boys roughhousing.
This demonization of intrinsic maleness is part of a feminist movement to rewrite human history as the tale of tyrannical patriarchy. It quickly mutated out of the #MeToo campaign, which began as a reasonable get-square with powerful men who preyed on women but since has taken on a frighteningly punitive air.
Now masculinity itself is the enemy and must be crushed from its earliest manifestations.
Boys and young men are bombarded with messages pathologizing their DNA. If they look at a woman, they’re accused of leering. If they open a door for a woman, they’re sexist. Even the way they sit on the subway has been criminalized as “manspreading.”
The American Psychological Association formalized the new pathology earlier this year by declaring “traditional masculinity is psychologically harmful.”
The male attributes it fingered as most worrisome were: stoicism, competitiveness, dominance, aggression, anti-femininity, achievement, “eschewal of the appearance of weakness,” adventure, risk and violence.
Gimme a break! Without any of that, all you’re left with is a soy boy with whom no self-respecting woman would want to mate.
This is the paradox of human attraction. Evolutionary psychologists have found that women instinctively desire a mate who can protect her and their offspring. “Modern women” look for “ancestral cues of a man’s fighting ability,” in the words of a 2017 study in the Proceedings of the Royal Society.
This is the very masculinity that is being damned as the toxic seed of the patriarchy. Courage and derring-do is the essence of maleness and is what has allowed western civilization to prosper.
Posted by jtf at 5:52 AM