Antifa: Terrorists of the Bourgeoisie

The savage assault on journalist Anti Ngo by leftists in Portland, Oregon, has brought renewed attention to the barbaric Antifa organization.


Ngo, a journalist for center-left online magazine Quillette, was beaten by a mob and sent to the emergency room with a brain bleed while filming demonstrators from the group. He is the victim of a criminal, terrorist act. The only normal, appropriate response is to wish him a speedy recovery—and to demand the swift arrest and prosecution of his attackers.
Here is the danger that journalists like CNN’s Jim Acosta constantly warn about from the comfort of their sinecures. But instead of blaming Antifa, the media responded to an actual assault on a journalist with equivocation and muted indifference. Reporters latched onto a “concrete milkshake”rumor to downplay the fact that Ngo was assaulted. Outside of a few token denunciations, the media ignored the attack, joining the ghoulish scolds who blamed Ngo, the victim, for “provoking” Antifa.
Why this response? Journalists know that Ngo is not one of them, which is to say they are safe. They are “real journalists,” liberal activists who evangelize their “truth” behind a mask of neutrality.
Many on the Right have noticed, with alarm, that the media turns a blind eye to leftist violence, and this is no mistake. Antifa are the untamed, unhygienic foot soldiers of the bourgeoisie. It’s an unfortunate position for so-called Marxists to be in, but it’s true: Antifa does the dirty work that’s too low for even the professional smear artists behind Covington Catholic, Russiagate, and the slander against Brett Kavanaugh.
Instead of calling Antifa “fascists,” which they are not, it would probably upset them more to call them what they really are: communists and anarchists pretending to be dissidents, while enjoying the protection of those in power. They’re rebels without a cause, with all of the adolescent angst that title implies.
Antifa members are plainly terrorists, and their violence is no joke, yet their activism is superfluous, narcissistic roleplay. Antifa justifies violence by appealing to an urgent threat of “bigots” having a platform, as if Big Tech corporations were not already taking care of that for them. Their “revolt” is happening from the top-down, not the bottom up.
The most prestigious papers and universities, the most powerful corporations, share in common with these malcontents a liberal monoculture that has hollowed out and colonized American culture. Their most relevant political ideas—open borders, kooky gender theory—have already been co-opted by the mainstream. Marxism, on the other hand, is an academic philosophy with virtually no relevance to the political world anymore.

Historically, Marxists railed against the bourgeois. Today’s “revolutionaries” are the bourgeois. What could be more horrifying, more injurious to a Marxist’s self-esteem—to be on the same side as Nike?
Leftist revolt is, these days, a contradiction in terms. But a veneer of dissidence is politically necessary for their project. A dominant Left takes up the mantle of the underdog to justify chasing conservatives out of the public square.
Antifa shares with their journalist sympathizers a romantic, misplaced sense that they are persecuted rebels. It must pain Antifa and their cheerleaders in Brooklyn to know that their ideas have been absorbed into mass culture. Having the same viewpoints as Fortune 500 companies and Stephen Colbert isn’t so punk, is it? It’s obviously not edgy or cool, but a desire to role-play as turn-of-the-century labor agitators persists.
The Left therefore has a dilemma: how to be transgressive, when the opportunities for transgression have been taken away? Answer: invent an imaginary, omnipresent threat of Nazis in need of being punched.
This is where the revolutionary make-pretend of Antifa and persecutory delusions of elite journalists solemnly intoning “Democracy dies in darkness” converge: leftism is culturally dominant, but the Left can’t give up the label of the dissident to the very people they are forcing their ideology upon. So the Left convinces itself, and tries to convince everyone else, that there is an ascendant “fascist” threat. Violent public tantrums are rationalized as the necessary pushback.
But these fancies of persecution are all backwards. Even the fringiest leftism is boring, milquetoast, and safe. Despite Trump’s attacks on the “free press,” journalists—at least liberal journalists, anyway—incur no risk when they tattle on Catholic high school boys from the heights of power for “smirking” at a Native American, or print libels about the president of the United States with impunity, or publish op-eds about how toxic the West is.
For journalists in the era of Trump, Trump’s attacks on their largely unchecked power to influence public opinion is imagined as an assault on democracy. But journalists have worked to stifle democracy, not merely by discrediting an election but by forcing their unpopular ideas on a population that has rejected their elite ideology.
Journalists have a grandiose tendency to style themselves martyrs for democracy, but really they are paladins of the powerful, agents of the illiberal liberalism that Americans voted to reject in 2016. Trump’s election was a true bottom-up rebellion at the ballot box against this oppressive monoculture. Their vote was for common sense over political correctness, national identity over open borders. 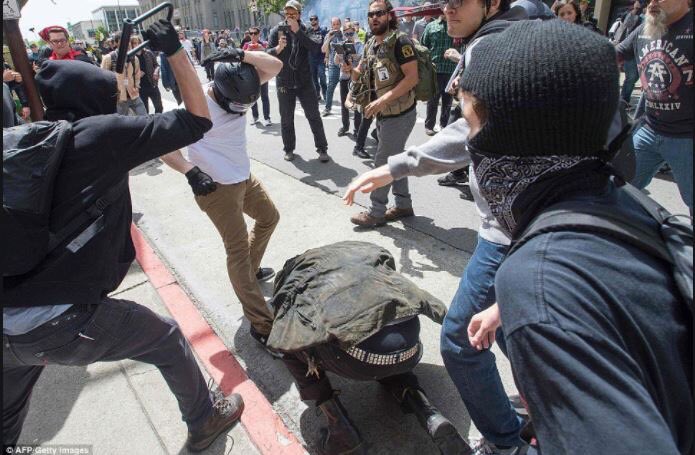 Despite Trump’s rise to power, the Left remains firmly in control of the culture. So they invent an imaginary rampant bigotry and romanticize the danger faced by the brave journalists and activists “fighting for democracy” to justify the indefinite advance—by violence, if necessary—of progressivism. What “fighting for democracy” actually means, it turns out, is fighting for leftism at any cost, whether by encouraging violence against dissenters or preaching about the pressing need for Portland, Maine, to accept Third World refugees.
On some level, it must bother the next generation of progressive activists-in-training at elite universities to recognize that they enjoy vastly more privilege than the downwardly mobile whites they castigate as the spawn of Satan. That projection soothes the conscience, keeps the obvious contradiction out of mind: America’s most privileged people are constantly reminding everyone else, especially those on the decline, of privilege they don’t have.
While Antifa’s “revolution” is a complete joke, the movement’s methods are not, and the mainstream Left is still wise enough to maintain a careful distance with token criticism of its violence. But Antifa offers something too useful to be rejected for the bougie progressives who occupy the halls of power. They are a threat, a warning, for those Americans who refuse to bow down before Progress and History.
The media will go to any length to defend the fringe left against even the most moderate conservative. Andy Ngo is hardly right-wing: Quillette prides itself on being a bastion of classical liberal centrism. But liberal centrism, failing to be progressive, is an aberration that the Left hates like a true believer hates a heretic.
More and more conservatives are alarmed by a growing tendency on the left to tolerate worse and worse violence against them. “Milkshaking” is fast giving way to blaming the victims of mob beatings—because they’re on the wrong side. In tolerating Ngo’s attack, the liberal establishment has sent an ominous message: the future of the United States has no room for conservatives or their “bigoted” notions, and conservatives who do not surrender now should expect the worst.
One can only speculate about what motivates individual members of Antifa to wake up every morning, but quite a few of them seem to be mentally ill, maladjusted dropouts. To hazard a guess, activism for Antifa members is a kind of public therapy, an excuse to be terrible people and unleash violent resentments on a scapegoat for their personal problems.
They have a desire to terrorize and inflict harm, but there is nothing for them to fight for that has not already received the sanction of those in power. This is, admittedly, a frustrating situation for people who are desperate to be a part of history, but whose role has already been usurped by Silicon Valley, the FBI, Yale, and CNN.
Such people make for perfect attack drones, and the bourgeois is only too glad for their help.
Posted by jtf at 6:10 AM

Email ThisBlogThis!Share to TwitterShare to FacebookShare to Pinterest
Labels: Crime and Punishment, Media and Culture, Politics