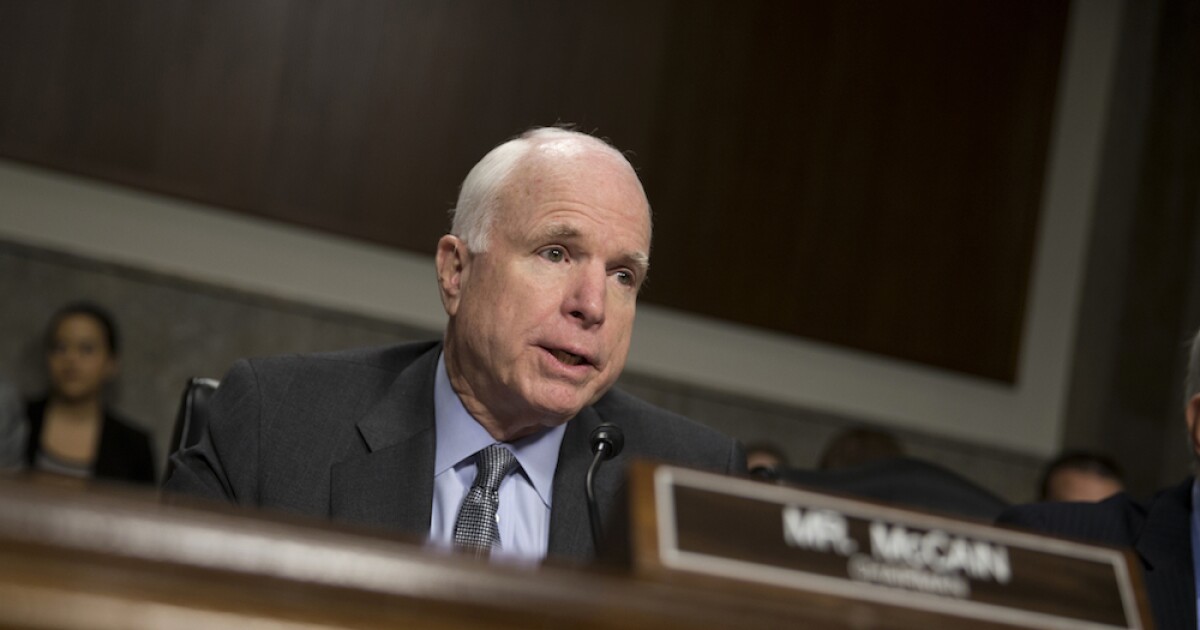 In his 2018 book, The Restless Wave, the late Senator John McCain (R-Ariz.) wondered aloud why he was sought out and given the infamous Steele dossier shortly after the 2016 presidential election.


After suggesting that anyone who questioned his role in handling the political document was indulging in “conspiracy theories,” McCain offered his explanation: “The answer is too obvious for the paranoid to credit. I am known internationally to be a persistent critic of Vladimir Putin’s regime and I have been a long while.”
It is true that McCain was an outspoken critic of Putin. But the big problem with McCain’s defense is that by the time he wrote those words—presumably the end of 2017, since the book was published in late May 2018—it already was public knowledge that the dossier had been authored and distributed by political pimps funded by the Hillary Clinton campaign and the Democratic National Committee. When McCain was writing his book, many of the culprits were in serious legal jeopardy.
Christopher Steele, the dossier’s author, was being sued for defamation and was under congressional scrutiny in 2017. (McCain had sent his close associate, David Kramer, to meet Steele in London shortly after the 2016 election to track down gossip about the president-elect.) Steele also remains the subject of acriminal referral at the Justice Department for lying to federal officials.
McCain’s Senate colleagues were investigating Fusion GPS and its owner, Glenn Simpson, who produced and peddled the fabricated document, in the summer of 2017. (It was Simpson, not Steele as McCain suggested in his book, who gave Kramer the dossier in late November 2016; McCain would later provide that copy of the dossier to former FBI Director James Comey, who already had used the sleazily obtained and Democrat-funded opposition research to get a secret court’s approval to spy on Trump campaign aide Carter Page.)
Kramer also testified before the House Intelligence Committee in December 2017 related to its probe of the dossier, and he later invoked his Fifth Amendment right to avoid further questioning.
And if his book was still in production in February 2018, McCain would have known that the FBI withheld crucial details about the dossier’s political provenance in a shameful scheme to violate the privacy rights of a U.S. citizen whose only offense was volunteering to help Trump in 2016. McCain knew it because he vehemently opposed the release of the bombshell memo authored by Representative Devin Nunes (R-Calif.), former chairman of the House Intelligence Committee, which detailed how the dossier was presented as evidence to the FISA court. The senator accused Trump and Nunes of attacking the FBI and for “looking at the investigation through the warped lens of politics and manufacturing partisan sideshows,” McCain wrote in a statement the day the memo was released. “If we continue to undermine our own rule of law, we are doing Putin’s job for him.”
None of these facts are addressed in McCain’s book. Simpson and Fusion GPS are not mentioned, even though Simpson was McCain’s source for the dossier. There was no acknowledgement that McCain and his associates were complicit—either unwittingly or intentionally—in a wide ranging plot to sabotage the incoming president of the United States by sowing doubt about the legitimacy of the election and Trump’s alleged fealty to Putin. Instead, McCain wrote that anyone who doubts his actions can “go to hell.”
Perhaps the reason why McCain overlooked those inconvenient details is because he was a central figure in fueling hysteria about Russian influence in the election after Trump won the presidency. At the same time, Kramer wasworking behind the scenes along with Simpson to legitimize the dossier, including confirming the explosive news that McCain personally delivered it to Comey in early December 2016. Collectively, it produced the fertile soil from which the Trump-Russia election collusion hoax would grow after Trump’s inauguration.
Sadly, rather than use his stature and leadership skills to soothe a nation rocked by the surprise election of Donald Trump, John McCain instead poured rhetorical gasoline on a smoldering body politic. Working intandem with shell-shocked Obama officials desperate to find an excuse for Hillary Clinton’s humiliating loss, McCain publicly pounded the idea that Russian “hacking” was the reason for her defeat. His accusations escalated from initially decrying Russia’s sketchy interference in the election to calling it an “act of war” by December 2016.
McCain threatened Trump not to “reset” relations with Putin and outlined a number of sanctions the new president should impose. “There are a lot of more stringent measures we should take, after all it was an attack on the United States of America and and an attack on the fundamentals of our democracy,” McCain warned in December 2016. “If you destroy the free elections, then you destroy democracy.” In a fact-free interview on “Face the Nation” on December 11, 2016, McCain said he wanted a select committee to investigate Russia for “hacking into the United States 2016 election campaign.”
Keep in mind, the only evidence of an “attack on the fundamentals of our democracy” at the time was a vague October 7, 2016 notice from Obama’s highly-politicized intelligence community that insinuated Russian actors were behind various email hacking activities. Obama had ordered a full scale review, which resulted in a questionable January 2017 report alleging that Putin “aspired to help” Trump win the presidency. The evidence to support the claim remains highly classified.
On January 5, 2017, the day before that report was released, McCain scheduled a hearing of his committee featuring testimony by then-Director of National Intelligence James Clapper to push the Russian election “hacking” plotline. McCain had an interesting exchange at one point with Clapper, whom the Arizona Republican lauded for his “integrity and professionalism.”

McCain: If they succeeded in changing the results of the election, which none of us believe they were, that would have to constitute an attack on the United States of America because of the effects had they succeeded. Would you agree with that?
Clapper: We have no way of gauging the impact . . . it had on choices that the electorate made. There’s no way for us to gauge that.

See how that worked? No one directly is saying that the Russians changed the outcome but we kind of are because there’s no way to know that they didn’t.
The day after McCain’s hearing, Clapper and Comey briefed President Obama about the intelligence community’s report as well as the salacious allegation about Trump and Russian prostitutes. Comey met afterward with Trump, notifying him of the ridiculous accusation with a warning that CNN was “looking for a news hook” on it. Clapper then apparently leaked details of that meeting to CNN reporters; the network aired an explosive story on January 10, 2017 that confirmed top intelligence chiefs briefed the president-elect that the Russians had “compromising personal and financial information about Mr. Trump.”
An hour later, BuzzFeed would post the entire Steele dossier. BuzzFeed’s source? David Kramer.
McCain eventually would become a staunch defender of Special Counsel Robert Mueller; he told CNN’s Dana Bash in May 2017 that the collusion investigation was “going to be part of this centipede that the shoes continue to drop.”
Many people now insist that it is somehow unfair or disrespectful to examine McCain’s role in the biggest political scandal in American history because he is gone. Although the president has a valid reason to be angry about McCain’s role in this scandal, Trump’s impetuous remarks only obscure the more serious charges about the late senator’s complicity in fomenting the destructive post-election Russia hysteria.
The American people deserve a full accounting of all the players involved, even if the facts are unsettling for some to reconcile. The unwarranted and yet unproven Russia collusion hoax will forever taint the Trump presidency and has resulted in real life consequences for innocent people, not to mention the upheaval of our political system. No one should be shielded from responsibility.
Posted by jtf at 7:30 AM