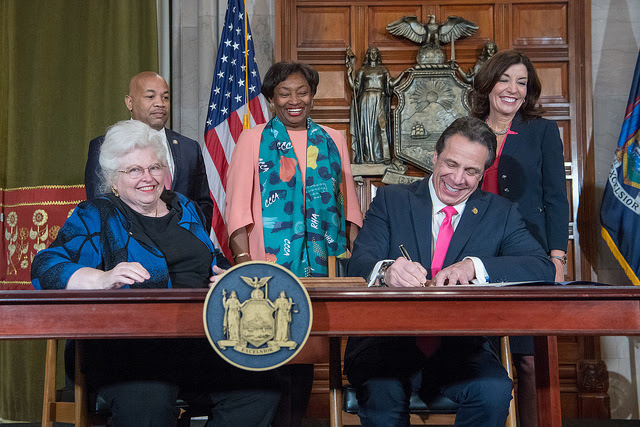 As The Daily Wire reported, New York is set to legalize abortion through every stage of pregnancy. Once the bill is signed into law, it will be legal to kill a fully developed, pain-capable infant up to the very moment of birth.


Governor Andrew Cuomo, a fake Catholic who would be excommunicated if his bishop had half a spine, decided to celebrate this gruesome and genocidal law by ordering that the World Trade Center be lit pink. That building, you may recall, was built as a monument to the 3,000 people who died on 9-11. Now New York's despicable governor has turned it into a celebration of death. There is a race among Democrat politicians to see who can be the most depraved, cynical, and inhumane, and it seems that Cuomo has just surged ahead.
Also keep in mind that black babies in New York City are already more likely to be aborted than born. Apparently, that wasn't enough death and bloodshed to satisfy the psychopaths who comprise the New York state legislature. Will they be satiated when no minority children see the light of day? One wonders how high the pile of bodies must reach before these people will throw up their hands and say, "Okay, enough."
Apologists will argue that the new law only makes late-term abortion legal in cases where it will save the mother's life. The problem with this argument is that it is false on every conceivable level. First, the law allows for abortions to protect the woman's life "and health." What does "health" mean? Well, anything. The law conspicuously avoids defining the term. It seems that any kind of health concern would qualify — physical health, emotional health, psychological health, financial health. The point is that the "life and health" stipulation will not effectively prevent any woman from getting an abortion for any reason at any time.

Second, late-term abortion is never necessary to protect a woman's life or health. No late-term abortion has ever been committed for the sake of saving a woman's life. It has never happened and will never happen. I repeat: there is never any circumstance, ever, where a late-term abortion is medically necessary. It could be necessary, in the case of some kind of cataclysmic complication, to remove the child from his mother's womb. But it is never necessary to kill the child before removing him. There is no medical reason to take that extra step of preemptively killing the child.
Just to drive home the point, here is how a late-term abortion — the kind of abortion just legalized in New York — is carried out: as it has been explained by a former abortionist, the baby is injected with a poison directly into his skull or torso. He then suffers a hideously painful death, which he will certainly feel because of his developed nervous system. The mother carries the corpse around in her womb for a day. The next day, there is an ultrasound to check if the baby is dead. If he isn't — if he has been writhing and suffering in agony for the past 24 hours, clinging onto life — then he will be injected again. The following day, the mother delivers her dead child. Sometimes she delivers him at the clinic, but if she can't make it on time, the clinic is perfectly happy to recommend that she give birth into her toilet.
The crucial fact is that a delivery must happen either way. If a mother in the third trimester decides she doesn't want or can't have her baby inside her, she is going to have to deliver him one way or another. The only question is whether she will deliver a dead child or a living one. Giving a lethal injection to the child may be the more convenient route, but it is certainly not the safer or healthier or more necessary one.
Speaking of lethal injection, in case you haven't yet grasped how twisted this law is, consider that capital punishment has been ruled unconstitutional in New York. You are not allowed to give a lethal injection to convicted serial killers, pedophiles, rapists, school shooters, or any other species of monster. But you can give a lethal injection to an infant. Indeed, you can only give lethal injections to infants in New York. The crime of child rape will not earn you the needle. The crime of being conceived in the wrong womb might. It is a capital offense, and you may well be made to suffer dearly for it.
God have mercy on us all. We certainly don't deserve it.
Posted by jtf at 8:44 AM